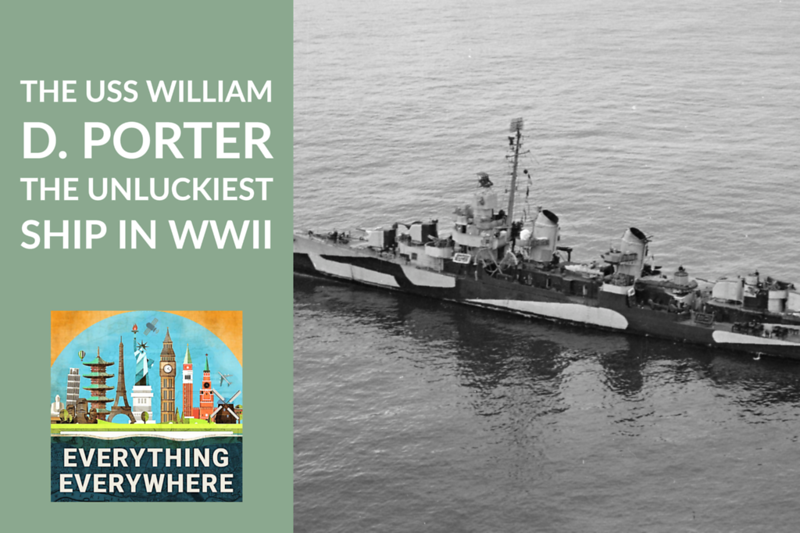 During World War II, the United States had a fleet of over 1,200 combat ships. Each of them had a unique story and service record.

With so many ships, there would be many stories of heroism, stories of tragedy, and some stories of total incompetence.

One ship, in particular, was so bad, it became the butt of jokes throughout the Navy because they almost killed the President of the United States.

Learn more about the USS William D. Porter, The Unluckiest Ship in WWII, on this episode of Everything Everywhere Daily.

My audiobook recommendation today is The Second World Wars: How the First Global Conflict Was Fought and Won by Victor Davis Hanson.

The Second World Wars examines how combat unfolded in the air, at sea, and on land to show how distinct conflicts among disparate combatants coalesced into one interconnected global war. Drawing on 3,000 years of military history, Victor Davis Hanson argues that despite its novel industrial barbarity, neither the war’s origins nor its geography were unusual. Nor was its ultimate outcome surprising. The Axis powers were well prepared to win limited border conflicts, but once they blundered into a global war, they had no hope of victory.

USS William D. Porter got its start as a quite average ship. It was a Fletcher Class destroyer, which was one of 175 of that type that was built between 1941 and 1945.

The keel for the ship was laid down on May 7, 1942, and it launched on September 27, 1942, from Orange, Texas where it was built. That is an insane construction schedule for ships today, but it was the norm back in World War II when the goal was to crank out as many ships as possible.

It was commissioned and put into service in July 1943 and it traveled to bases along the Atlantic coast in the US doing its shakedown, where they determine if the ship is seaworthy. It also conducted training exercises off the Eastern Seaboard in preparation for going into full service.

The ship was affectionately known as the Willie-Dee.

Its first mission was a secret one that involved a small fleet of ships, in particular the battleship the USS Iowa. No one knew what the mission was until the day they were to set sail.

The troubles of the USS William D. Porter began immediately as they were leaving port in Norfolk, Virginia.

The first problem was when they left port, they raised their anchor improperly and they damaged one of the ships which it was docked next to. They tore off one of the railings and a lifeboat mount from one of the ships. No one was hurt, but it was a very inauspicious start to their journey.

The next day, things didn’t go much better. They accidentally dropped a depth charge into the water which exploded. The reason why so many ships were in the fleet was to defend themselves against German u-boats. As no one knew the depth charge was being released, everyone in the fleet assumed that it was a torpedo attack, which caused everyone to take evasive maneuvers.

The Porter had to sheepishly notify the rest of the fleet that they had accidentally caused the explosion and that they weren’t under attack.

After the accidental depth charge, the Willie-Dee was hit by a rogue wave, which washed one of the crew overboard and he was never seen again.

The next day, it got much worse.

Roosevelt wanted to see an anti-aircraft drill to see how the ships would defend themselves against an air attack. They also went through a torpedo drill to simulate how they would launch a torpedo.

Normally, when you do a drill like this, you remove the primer from the torpedo which is what makes it shoot out of the torpedo tube. However, the torpedoman aboard the Porter forgot to take the primer out. When they simulated launching a torpedo, they actually launched a torpedo.

…and the torpedo was heading towards the USS Iowa, which had on board the President of the United States.

I should add it wasn’t just the president aboard the Iowa. Roosevelt had brought with him the Secretary of State Cordell Hull, Chief of Staff Admiral William D. Leahy, Chief of Staff of the Army General George C. Marshall, Chief of Naval Operations Ernest King, Commanding General of the U.S. Army Air Forces Henry “Hap” Arnold, Secretary of Commerce Harry Hopkins, and many other high ranking officials.

If the Iowa were to be sunk, it would have taken out almost all of the American senior military leadership during the war.

The fleet was under strict radio silence for obvious reasons. They didn’t want to give their position away if there were German ships in the area.

The Willie-Dee was in chaos for the next five minutes, trying to figure out how to warn Iowa. They tried to communicate via signal slights, but they got the message wrong and accidentally told the Iowa that there was a torpedo traveling away from them.

Eventually, they broke radio silence to warn the Iowa.

When Roosevelt was notified, he asked for his wheelchair to be moved to the side of the ship where he could see the torpedo.

The Iowa went full steam ahead and avoided the torpedo, which exploded safely behind it 1,000 feet away. Supposedly, the Iowa turned its huge guns on the Willie-Dee just in case it was an actual assassination plot.

Once the accidental torpedo attack was over, and the whole affair lasted about five minutes, the Willie-Dee was ordered to leave the fleet and head to Bermuda.

While in Bermuda, the ship was met by marines, and the entire crew was quarantined until an investigation could determine what had happened. Was it an accident, or was there a saboteur on board who did it on purpose?

Ultimately, the torpedoman who was responsible for the event, Lawton Dawson, was court marshaled and sentenced to 14 years of hard labor. In addition to making the mistake, he also tried to cover it up by throwing evidence of the primer over the side of the ship.

Roosevelt, however, gave him a full pardon as he thought it was an accident and there was no harm done.

Word of the incident spread quickly amongst other ships in the Navy. The Willie-Dee was frequently greeted on the radio with “Don’t Shoot. We’re Republicans!”.

After the torpedo incident, the ship was sent to the relatively safe Aleutian Islands in Alaska where they would serve as an escort for other ships.

You can’t get into too much trouble in Aleutians, but the Willie-Dee found a way.

One day while in port, one of the sailors came back to the ship drunk and thought it would be fun to fire one of the ship’s 5-inch guns. Before anyone could stop him, he managed to fire off a round….which landed in the front yard of the commandant of the base the ship was at….while he was hosting a reception. No one was hurt, but it certainly didn’t help the reputation of the ship.

Finally, the ship was needed for duty in an actual active theater. It was sent to the Philippines in late 1944 where it served admirably without any major errors or mistakes.

Its final action, it participated in the Battle of Okinawa.

At this stage of the war the Japanese were getting desperate and you saw the highest use of kamikaze pilots. These were pilots who flew explosive-filled planes into ships on suicide missions. They were devastating and they were basically an early, human flown form of a cruise missile.

On June 10, 1945, the USS William Porter had its final stroke of bad luck. An incoming kamikaze plane dove at the ship, and the ship managed to actually shoot it down. However, the plane splashed down near the ship and somehow managed to explode while it was underwater, directly underneath the Willie-Dee.

The explosion heaved the ship into the air and slammed it back down onto the water. The damage from the explosion proved fatal.

The ship managed to hold on for another three hours before the captain gave the abandon ship signal, and minutes later, the ship sunk under the water.

In the last hours of this unlucky ship, they may have finally had their first bit of good luck. Even though the ship sank, all of the crew survived.

The incident with the USS Iowa was kept confidential and wasn’t released to the public until 1958. Then everyone knew the story of the USS William D. Porter: The Unluckiest Ship in the US Navy.