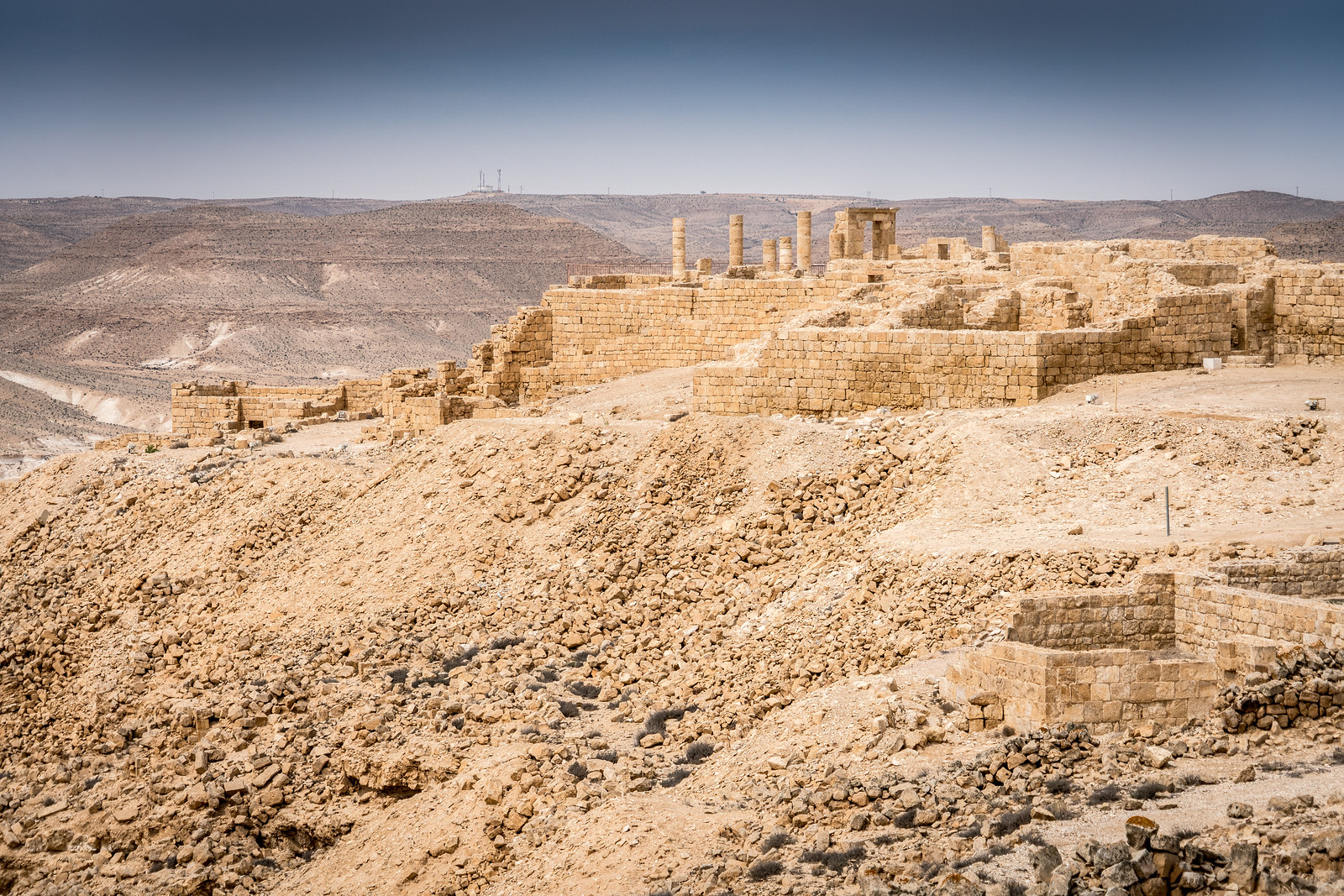 The Incense Route was a network of trade routes extending over two thousand kilometers to facilitate the transport of frankincense and myrrh from the Yemen and Oman in the Arabian Peninsula to the Mediterranean.

The four Nabatean towns of Haluza, Mamshit, Avdat, and Shivta, with their associated fortresses and agricultural landscapes linking them to the Mediterranean, are situated on a segment of this route, in the Negev Desert, in southern Israel. They stretch across a hundred-kilometer section of the desert, from Moa on the Jordanian border in the east to Haluza in the northwest. Together they reflect the hugely profitable trade in Frankincense from south Arabia to the Mediterranean, which flourished from the third century BCE until the second century CE, and the way the harsh desert was colonized for agriculture through the use of highly sophisticated irrigation systems.

Ten of the sites (four towns – Haluza, Mamshit, Avdat and Shivta; four fortresses – Kazra, Nekarot, Makhmal, and Grafon; and the two caravanserai of Moa and Saharonim) lie along, or near to, the main trade route from Petra, capital of the Nabatean Empire in Jordan, to the Mediterranean ports. The town of Mamshit straddles the northern parallel route. Combined, the route and the desert cities along it reflect the prosperity of the Nabatean incense trade over a seven hundred year period, from the 3rd century BCE to the 4th century CE.

The Incense Route – Desert Cities in the Negev is a cultural UNESCO World Heritage Site in Israel. It was inscribed in 2005 because it demonstrates the trading activity of frankincense and myrrh in the region. This trade activity was highly profitable and is a huge part of the culture and history in the region.

The UNESCO site Incense Route – Desert Cities in the Negev consists of multiple sites. There are 4 sites that belong to this UNESCO property:

The ruins which currently exist at these sites mostly date back to the crusader era, even though the cities themselves are much older. That is why you will see Christian iconography and other symbols. The towns were part of a network of trading sites which extended from Oman, through Saudi Arabia, Jordan, and Israel. The Natebean city of Petra was also part of the same trading network.

About the Incense Route – Desert Cities in the Negev

The Incense Route – Desert Cities in the Negev is a cultural site valued for the impact of human activity (such as trade) to the development of the region. The site is concentrated on the Negev, which is located to the south of Israel. During the Hellenistic-Roman period, this area is crucial as it served as the link between Arabia and the Mediterranean. There are four towns, in particular, that experienced wealth during the period of 300 BC to 200 AD and they are all listed under the UNESCO site Incense Route – Desert Cities in the Negev.

The incense route is also crucial to history because it serves as the east-west link. In addition, the route was responsible for bringing wealth to the Nabateans. By the time of the Roman occupation, trading activity had diminished. The Romans took over Petra, which served as the capital of the Nabatean Empire in Jordan during this time.

The Incense Route – Desert Cities in the Negev is a UNESCO site that consists of various structures such as forts, towns, irrigation systems, and caravanserai. These were built mostly within the desertic areas in Southern Israel. The region’s history, particularly the role that the trade route played, ties all of the economic, social, and cultural histories of the region. This is why it earned the nod from the UNESCO World Heritage Committee in 2005.

Let’s take a closer look at each of the sites listed under the UNESCO Property Incense Route – Desert Cities in the Negev:

Avdat: This town is surrounded by a wall that was built out of limestone. In addition, it is also located within the remains of a Nabatean temple. A few other notable features within this part of the UNESCO site are arched roofs, short walls, main street, two churches, and a fort.

Haluza: This town is located on the extreme north of the UNESCO site. This is a desert town consisting of many sand dunes that have nearly covered the entire town. On recent excavations on the site, archaeologists discovered two churches, wine press, theater, tower, and a road.

Shivta: This town is located in Central Negev. It is one of the four towns comprising the Incense Route – Desert Cities in the Negev. This town has not been fully excavated yet; but from the excavations done so far, researchers have uncovered two- to triple story houses, roads, governor’s residence, farm, wine press, town square, and churches with apses.

Mamshit: This is the last town that is listed on the UNESCO site Incense Route – Desert Cities in the Negev. It is located on the extreme western portion of the designated site. This one has undergone extensive archaeological excavations that have resulted in the following findings: market road, private residences, town wall, bathhouses, and caravanserai.