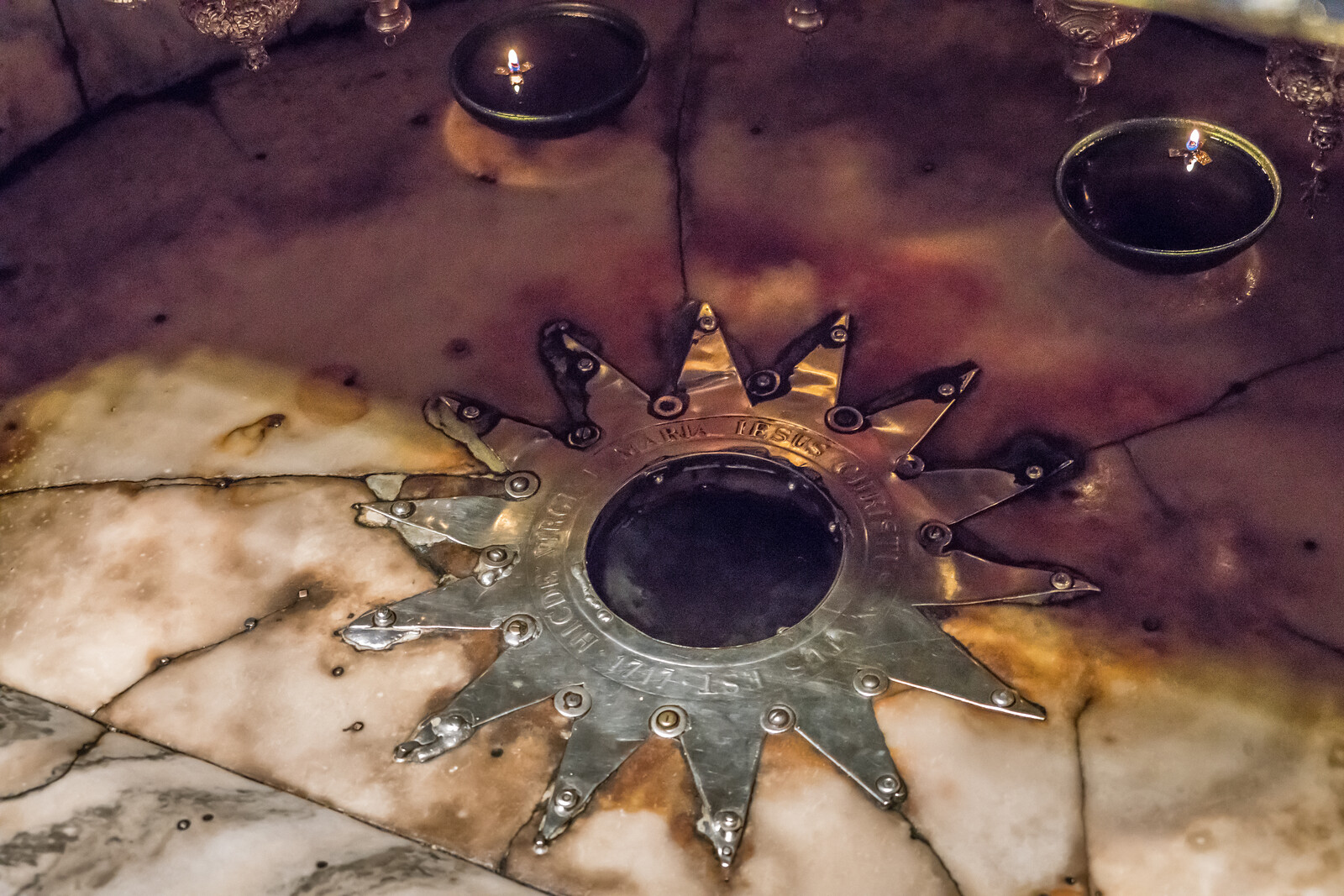 Formerly known as “The Birthplace of Jesus: Church of the Nativity and the Pilgrimage Route, Bethlehem,” the nativity pilgrimage to Bethlehem, Jesus’ birthplace is a sacred journey and lifelong dream for many. Traveling to Bethlehem from Jerusalem is not difficult if you’re not Israeli, although there are some restrictions when going into the Palestinian Territories, and your van might get searched crossing the border, but dozens of buses and tour groups do this every day and it’s quite normal to make the pilgrimage to Bethlehem.

Most groups visit the Church of the Nativity and leave, but there is more to see in the area, including the Milk Grotto and Star Street.

That said, the Church of the Nativity is the highlight of the visit. The current building was built in 565 by the Byzantine Emperor Justinian. Over the centuries, there have been many restorations and repairs to the building, including a more recent restoration in 2017.

The birthplace of Jesus is in a very small alcove under the main altar area. Expect a long line to visit the spot, which is marked by a silver star and is show in the very first photo above.

The door into the Church of the Nativity is also ridiculously small, so you’ll have to crouch to enter. This was created several hundred years ago to prevent horses from entering. The nativity pilgrimage is an important piece of cultural, religious, and world history, as is Bethlehem itself. This pilgrimage is often part of a visit to other important sites in the region, including the baptism site at Bethany Beyond the Jordan and the Biblical Tels of Megiddo, Hazor, Beer Sheba.

From the World Heritage inscription for The Birthplace of Jesus: Church of the Nativity and the Pilgrimage Route, Bethlehem:

Bethlehem lies 10 kilometers south of the city of Jerusalem, in the fertile limestone hill country of the Holy Land. Since at least the 2nd century AD people have believed that the place where the Church of the Nativity, Bethlehem, now stands is where Jesus was born. One particular cave, over which the first Church was built, is traditionally believed to be the Birthplace itself. In locating the Nativity, the place both marks the beginnings of Christianity and is one of the holiest spots in Christendom. The original basilica church of 339 AD (St Helena), parts of which survive below ground, was arranged so that its octagonal eastern end surrounded, and provided a view of, the cave. This church is overlaid by the present Church of the Nativity, essentially of the mid-6th century AD (Justinian), though with later alterations. It is the oldest Christian church in daily use. Since early medieval times, the Church has been increasingly incorporated into a complex of other ecclesiastical buildings, mainly monastic. As a result, today it is embedded in an extraordinary architectural ensemble, overseen by members of the Greek Orthodox Church, the Custody of the Holy Land and the Armenian Church, under the provisions of the Status Quo of the Holy Places established by the Treaty of Berlin (1878).

During various periods over the past 1700 years, Bethlehem and the Church of the Nativity have been, and still are, a pilgrim destination. The eastern end of the traditional route from Jerusalem to the Church, known as the Pilgrimage route, marks the road that connects the traditional entrance of Bethlehem, near King David’s Wells with the Church of the Nativity, and extends along the Star Street through the Damascus Gate, or Qos Al-Zarara, the historical gate of the town, towards the Manger Square. The Route continues to be celebrated as the path followed by Joseph and Mary during their trip in Bethlehem during Christmas ceremonies each year and is followed ceremonially by Patriarchs of the three churches at their several Christmases, and during their official visits to Bethlehem.

About Birthplace of Jesus: Church of the Nativity and the Pilgrimage Route

The Birthplace of Jesus: Church of the Nativity and the Pilgrimage Route, Bethlehem is a UNESCO site covering a total land area of fewer than three hectares and it has a buffer zone of 23 hectares. The inscribed property is located south of Jerusalem. It’s a notable site for the Christian religion since it is not only believed to be the birthplace of Jesus, but it’s located amongst the fertile limestone hill country, also known as the Holy Land.

The belief that this is the location of the birthplace of Jesus has been held since at least the second century AD. One particular cave on the site is believed to be the actual spot of Jesus Christ’s birth. Since being declared so by St. Helena, the mother of Constantine the Great, this place has been considered one of the holiest sites in Christendom—hence the historic pilgrimage route.

There are several components to this UNESCO site:

This UNESCO site consists of several properties in various locations. The designated sites include the following:

Church of the Nativity

The original church was commissioned by Constantine the Great, along with his mother Helena. The site of the church is the same location of the cave that was marked as the birthplace of Jesus. The Church of Nativity was completed in 339. However, it was destroyed during the sixth century by a fire as a result of the Samaritan Revolts.

Touring the Church of the Nativity