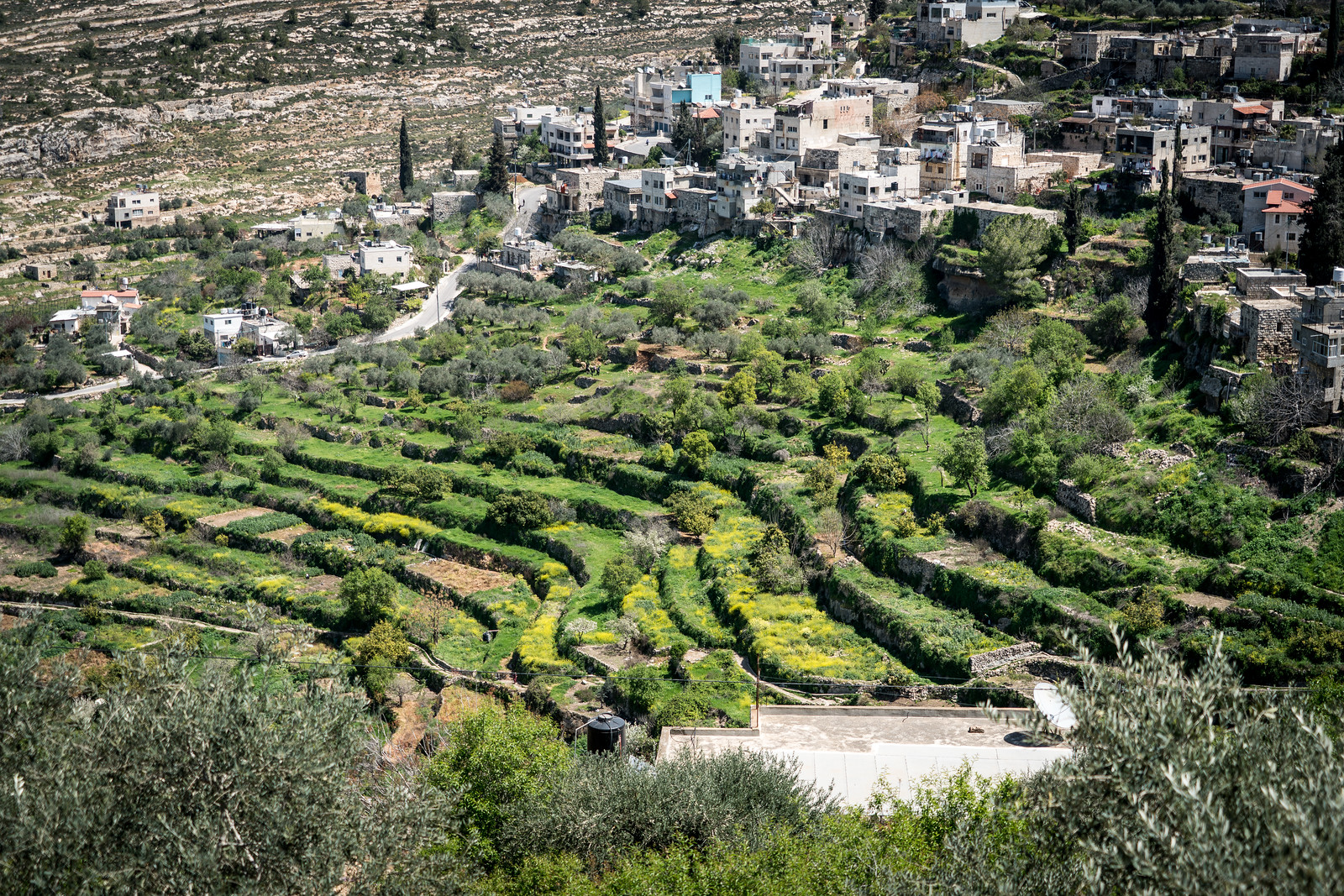 Battir is a major Palestinian cultural landscape, the adaptation of a deep valley system for agricultural purposes as a result of a good supply of water. The complex irrigation system of this water supply has led to the creation of dry walls terraces which may have been exploited since antiquity. The agricultural terraces, exploiting this irrigation system, were the basis for a strong presence of agriculture through the cultivation of olives and vegetables. The area still today has the same use.

The water distribution system used by the families of Battir is a testament to an ancient egalitarian distribution system that delivers water to the terraced agricultural land based on a simple mathematical calculation and a clear time-managed rotation scheme.

The village of Battir is not far from Jerusalem and is right on the Israel/Palestine border. In fact, there are Israeli train tracks which go right past the terraces at the bottom of the hill.

I could not find any organized tours to Battir, which was a shame. Nearby Bethlehem gets most of the attention in the region. That being said, it wasn’t that hard to get to Battir from Bethlehem. I had my tour guide in Bethlehem call a taxi for me which took me to there. It took about 15 minutes and cost about $10.

Battir is a fairly new world heritage site and as such the tourism infrastructure isn’t well developed. There are a few souvenir shops and cafes, but that’s about it.

The terraces are easily accessible if you are on the main street of the village. Expect to spend 30-60 minutes walking around the area. This site is probably going to be of interest to world heritage enthusiasts more than anyone else. Nonetheless, I think anyone visiting Jerusalem would be well off to come and visit a small Palestinian village, which Battir fits perfectly.

Palestine: Land of Olives and Vines – Cultural Landscape of Southern Jerusalem in Battir is a cultural UNESCO World Heritage Site in Palestine. It was inscribed on the UNESCO list in 2014; however, it was added to the list of UNESCO World Heritage Sites in Danger in the same year. This UNESCO-protected area was recognized for its series of agricultural valleys. These valleys are built with stone terraces within the village of Battir.

As the name implies – Palestine: Land of Olives and Vines – this area is noted for its olives, vines, and fruit that is grown in these agricultural valleys.

It is specifically located in the Central Highlands. The Battir hill landscape is built within a series of framed valleys that are recognized for the stone terraces. Most of these terraces are irrigated to facilitate market garden production. Meanwhile, some are dry but are planted with olive trees and grapevines.

The entire area that is comprised of the UNESCO site is over 348 hectares. However, it has a buffer zone of 623 hectares. The complex irrigation system on the site has enabled the creation of drywall terraces. Archaeological experts believe this method of irrigation has been around since antiquity.

The ancestors of Battir built this unique irrigation system. All of the terraces are man-made along with the dry-stone walls. There are eight-man clans that live in the village of Battir. Each of these clans takes turns on a daily basis in order to build the terraces and grow the crops. The location of the village of Battir contributed to the success and development of agriculture in the area. Aside from its strategic location, the availability of springs nearby is an important factor that made settlements possible in the area. They were able to adapt to the steep landscape in order to make it suitable for growing crops.