March 13 marks the anniversary of the date in 2007 when I turned over the keys to my house to travel around the world. It is the date I use to mark what I call my Travelversary.

The last 11 years have totally changed my life in every way imaginable. I have been to more places, and have done more things, and met more people than I have in the rest of my life combined.

I never ever imagined that I’d still be at this 11 years later. When I left I told everyone I’d be gone for a year, but I secretly thought I’d be gone for 2. I couldn’t conceive of 11 and I really had no idea what I’d do when the trip was over.

Things have changed since I started, but for me and for the world. Two years ago I stopped traveling full-time and got an apartment in Minneapolis, which has provided me a bit more stability and a place to put my stuff between trips. Nonetheless, travel is still my raison d’être and is now my business too.

I can think of no better celebrate my Travelversary than with a good ol’ list post, using 11 arbitrary points which happens to match the number of years I’ve been traveling.

1) The World is Really Big. I’ve been at this a decade and there are still a lot of places I haven’t been to. There are big chunks of the Earth that are still not filled in on my travel map. To explore the world properly takes time….a lot of time. It is really a lifetime pursuit. I have no desire to just stand in a place to say I’ve been there.

2) We are Living in the Golden Age of Travel. Right now as you are reading this is the best time in history to travel. Travel has never been cheaper or easier than it is today. Even if you are from a country like India where it is difficult to get visas, it is still better now than it has ever been before. Steamships and 60’s smoke-filled jets may look romantic in hindsight, but today’s travel, even with our tiny cramped economy seats, is still better than anything in the past.

3) Smartphones Have Changed Everything. When I started in March 2007, it was during the gap between when the iPhone was announced and when it shipped. I got an iPod Touch in November of 2007 in Japan and I went nuts over it. This was a device that had no camera, no cellular connectivity, no GPS, and very few apps. Today I can map out where I’m going anywhere on Earth, take photos and video, book a room, check train schedules, and dozens of other things. As I have noted before, we are getting close to a point where we only need to carry our smartphones with us when we travel.

4) Long-Term Travel Has Big Downsides. After 9 years on the road when I finally got an apartment, it wasn’t as if I could just go back to the way things used to be. All my friends had moved on. Many had moved away, other got married and had kids. Over the last 11 years, I’ve been able to see and do more than all but a handful of humans in history. It has been an incredibly enriching experience, but it wasn’t without a cost.

5) The Best Places are the Undervisited Places. The places which stick out most in my memory are the places which required a lot of effort to visit. South Georgia Island, Nahanni National Park, Torngat Mountains, Rennell Island, and other places are the ones which stand out the most. Most people stick to the popular destinations because that is what they know, and also because they are easy to get to. The world still has a lot of great places which few people have ever seen.

6) Relationships are Hard if You Travel. Most of the couples I know who travel were together when they started traveling. Most of the people I know who were single when they started traveling remain single today. There are some exceptions of course, but for the most part, this holds true. It is extremely difficult to have a relationship when you aren’t going to be around very long. Fantasies of going to an exotic city and having an affair are mostly just that. Fantasies. When someone is interested in you, you find out very quickly they are really more interested in the idea of traveling (for free) than they are in you.

7) You Don’t Need Much. Before I started traveling I had a 3,000sq/ft house. After a decade on the road, I now live in a 700 sq/ft apartment and I’m not sure I would really want anything bigger. When I unpacked everything I put in storage back in 2007, I was shocked at how much I had and at the absurdity of it all. My philosophy now is to try to have a few things but make those few things high quality.

8) The World is the Earth’s Biggest School. There is no learning environment quite like traveling. It beats any school and trumps any university. The reason why I can remember so much from my travels is that your mind is constantly having to adapt. You never get a chance to put yourself into automatic like you do when your life has a routine. Moreover, you aren’t just learning about each place you visit, but you also start to see the links and connections between all the places you’ve been.

9) Fear is in Your Head. I’ve seen to so many places first hand which most people only hear about on the news. Because the news only reports on bad things, most of the impressions which people have about the rest of the world are negative. The truth is, most people go about their lives with a sense of normalcy, regardless if something bad once happened there in the past. Fear stops too many people from traveling, which is such a shame.

10) The Ability to Adapt is More Important Than The Ability to Plan. I often say this when someone asks me for a quote about travel and its true. I spent months before I started my trip reading and planning. The moment I started, everything went out the window. Never put too much stock in your plans and always give yourself some flexibility.

11) I have no Desire to Stop I met a woman in her 90’s on a trip to the Galapagos. She did everything that everyone else did on the trip, except for snorkel. I figure if she can be active and travel well into her 90s, there is no reason why I ever have to stop. Arthur Frommer is 88 and still an active travel writer. Absent some unforeseen event, I don’t see why I shouldn’t be writing an even longer list post several decades from now. 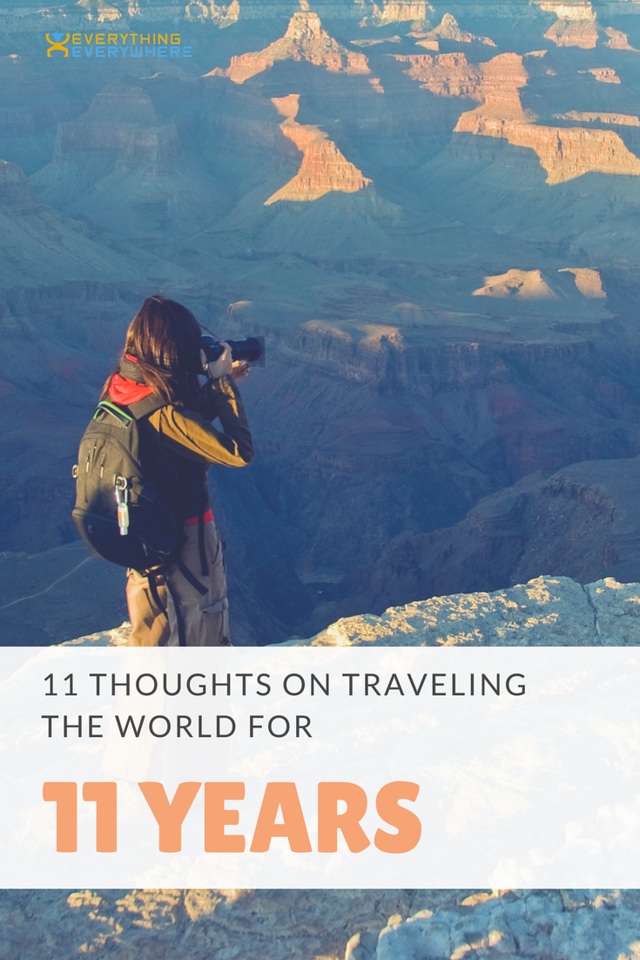