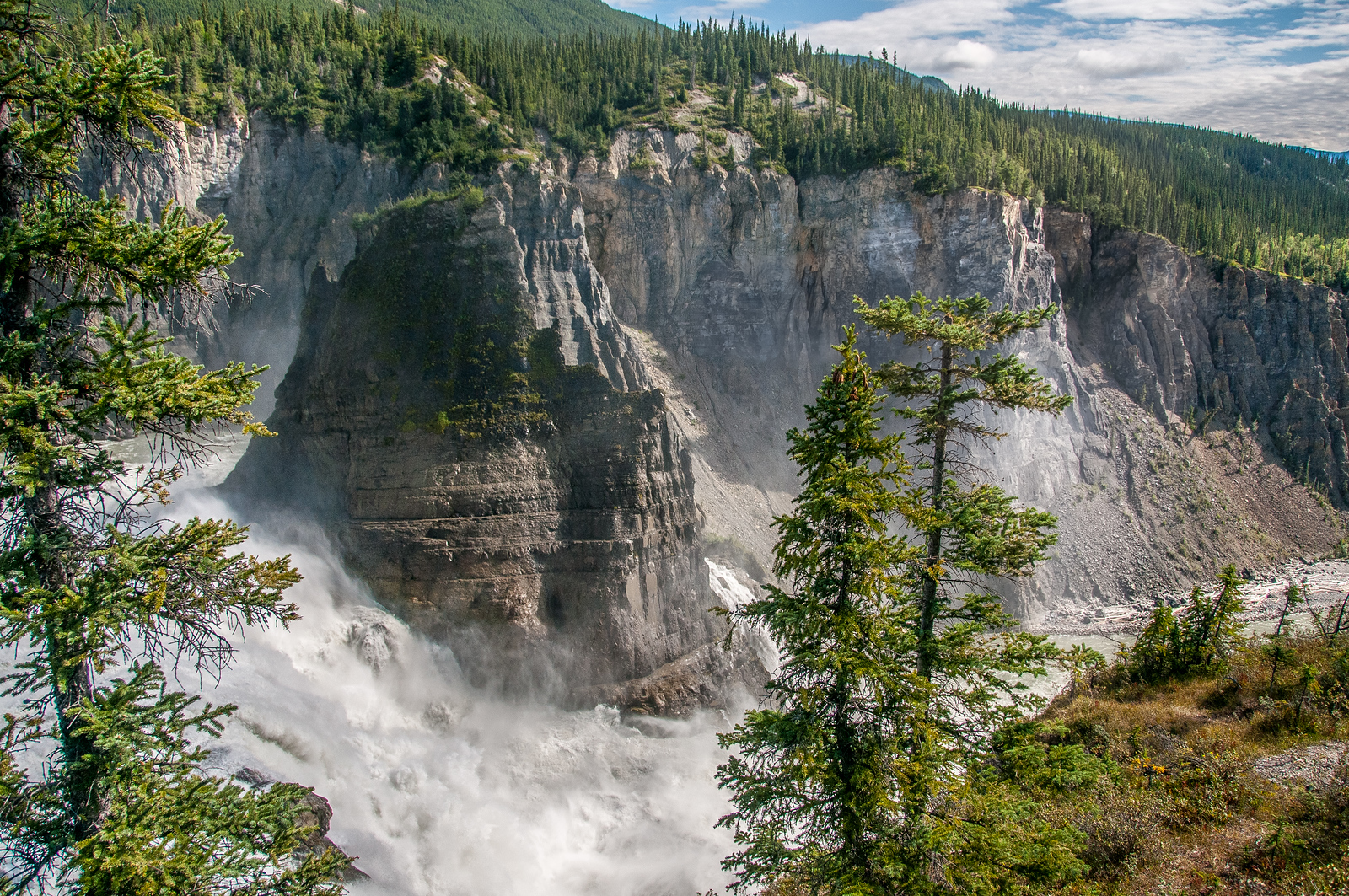 From the World Heritage inscription for Nahanni National Park:

Located in the southwest corner of Northwest Territories along the course of the South Nahanni and Flat rivers, the park lies in a diverse mountainous area comprising mountain ranges, rolling hills, elevated plateaus, deep canyons and huge waterfalls, as well as a unique limestone cave system.

The dissected sandstone, shale and limestone mountains ranges in the east and central areas of the park sharply contrast the Ragged Range of harder igneous rocks in the park’s western extremity. The park encompasses parts of the Hyland Plateau, Selwyn Mountains, Liard Plateau, Mackenzie Plain and Mackenzie Mountains and a major part of the Nahanni River, one of North America’s finest wild rivers.

In the valley below the Ragged Range, tufa mounds known as the Rabbitkettle Hotspring, rise in a succession of terraces to a height of 30 m. Other features of the area include three major canyons; Virginia Falls; extensive karst terrain with a complex underground river system, caves, labyrinths, closed canyons, and sinkholes; wind eroded sandstone landforms known as the Sand Blowouts; and large areas that have remained unglaciated for up to 300,000 years.

The park contains transitional and vegetation types of two major biomes: Nearctic boreal forest; and Nearctic alpine tundra. All stages of boreal forest occur, from recent burns to mature spruce forests, and with associated variations on wet, mesic and dry habitats. Densely growing white spruce and poplar dominate valley bottoms. At higher altitudes and on the northern slopes, black spruce is more prominent. An area of spruce-larch/lichen taiga with several orchid species is present near Virginia Falls. Alpine tundra characterized by sedges, lichens, grasses, and shrubs occurs on the higher mountains of the Tlogotsho, Headless and Funeral ranges. Wild mint, golden rod, yellow monkey-flower, and aster are among the many flowering plants that grow in abundance near mineral springs in the vicinity of Flat River. Almost 600 species of vascular plant and 325 species of bryophyte have been identified in Nahanni.

40 species of mammal, including grey wolf, grizzly bear, black bear, woodland caribou, moose, white-tailed deer, mountain goat, Dall’s sheep and beaver are present. A total of 170 species of bird in 29 families had been observed including peregrine falcon, golden eagle, trumpeter swan and bald eagle. Arctic grayling and Dolly Varden trout occur in the streams that flow into the Nahanni and Flat rivers.

Nahanni National Park was one of the inaugural 12 world heritage sites listed in 1978. Other sites in that initial group of twelve include the Galapagos Islands, Yellowstone National Park, Goree Island, Cracow’s Historic Centre, the Aachen Cathedral, the City of Quito, the Wieliczka Salt Mine, L’Anse aux Meadows, and Mesa Verde.

Given its status as one of the first dozen world heritage sites, I had high expectations for the Nahanni National Park. It did not disappoint.

Nahanni should be considered on the same level as other first-tier national parks in the world. As one former Nahanni park superintendent said, “it has elements of Yellowstone, Yosemite, and the Grand Canyon all in one park.”

The signature image of the park and the main attraction is Virginia Falls (shown above). This waterfall is twice the height of Niagara Falls and it one of the most significant waterfalls in the world. The World Waterfall Database lists it as the #6 waterfall in the world and the highest rated in North America. The average volume of water that comes over the falls in on a par with Victoria Falls in Africa.

If there was nothing in Nahanni but a giant waterfall, it would still probably be enough to warrant its listing as a World Heritage Site. However, the park itself is enormous and has so much more. Wikipedia lists it as the 25th largest protected area in the world.

The mountains are rugged and stunning. There are dozens of deep blue glacial lakes all over the park. The Ram River gorge is on a par with some of the most stunning canyons I’ve seen anywhere.

The reason you haven’t heard more about this park is quite simple: The only way to enter the park is by floatplane and it gets fewer than 1,000 visitors per year.

Nahanni National Park is a natural UNESCO World Heritage Site in Canada. The park was established in 1972 but it was recognized into the UNESCO list in 1978. The park is currently managed by Parks Canada, which is also responsible for managing most of the national parks in Canada. It is located in three cities in Northwest Territories: Fort Simpson, Fort Liard, and Nahanni Butte.

Nahanni National Park spans 413,000 acres area that includes a portion of the Mackenzie Mountains National Region. The central feature of the park is the South Nahanni River. In addition, there are four canyons (each with a depth of at least 1,000 meters) encompass the park. These canyons are referred to as First, Second, Third and Fourth Canyon.

About the Nahani National Park

Nahanni National Park is derived from the indigenous tribe that once inhabited the area. This tribe is believed to be the ancestors of the Navajo people. The park itself consists of a variety of landforms that took millions of years to develop. Hence, this is responsible for the diverse landscape in Nahanni National Park, which is not known to any other national park in Canada.

An ancient inland sea had left behind sediments onto the earth for a period of 500-200 million years ago. These sediments appear on the surface of the earth as layers of rock. As the land continued to shift, this resulted in the various ranges that are now seen today in Nahanni National Park. At the same time, this action on the earth also resulted in volcanic activity resulting in towers of heated rock known as igneous batholiths to form on the surface. There are no volcanoes within the Nahanni National Park, though.

The South Nahanni River is the central feature of the Nahanni National Park. This river runs the entire length of the park. This is also one of the most unique examples of an antecedent river. The most impressive thing about this river is that it follows the same path that it did during ancient times.

Aside from the South Nahanni River, the four canyons are also one of the most impressive features within Nahanni National Park. These canyons line the South Nahanni River. These canyons got their name from the prospectors who numbered them as they traveled through the course of the river. The final canyon is considered as the most beautiful of the four. Meanwhile, the First Canyon had the tallest vertical wall.

To round up the list of notable features within Nahanni National Park is Virginia Falls. The falls is where the water from the river would drop 90 meters in a thunderous plume. The dramatic spire of resistant rock right in the middle of the falls is one of its most notable features. It stands there amidst the thunderous surge of river water.