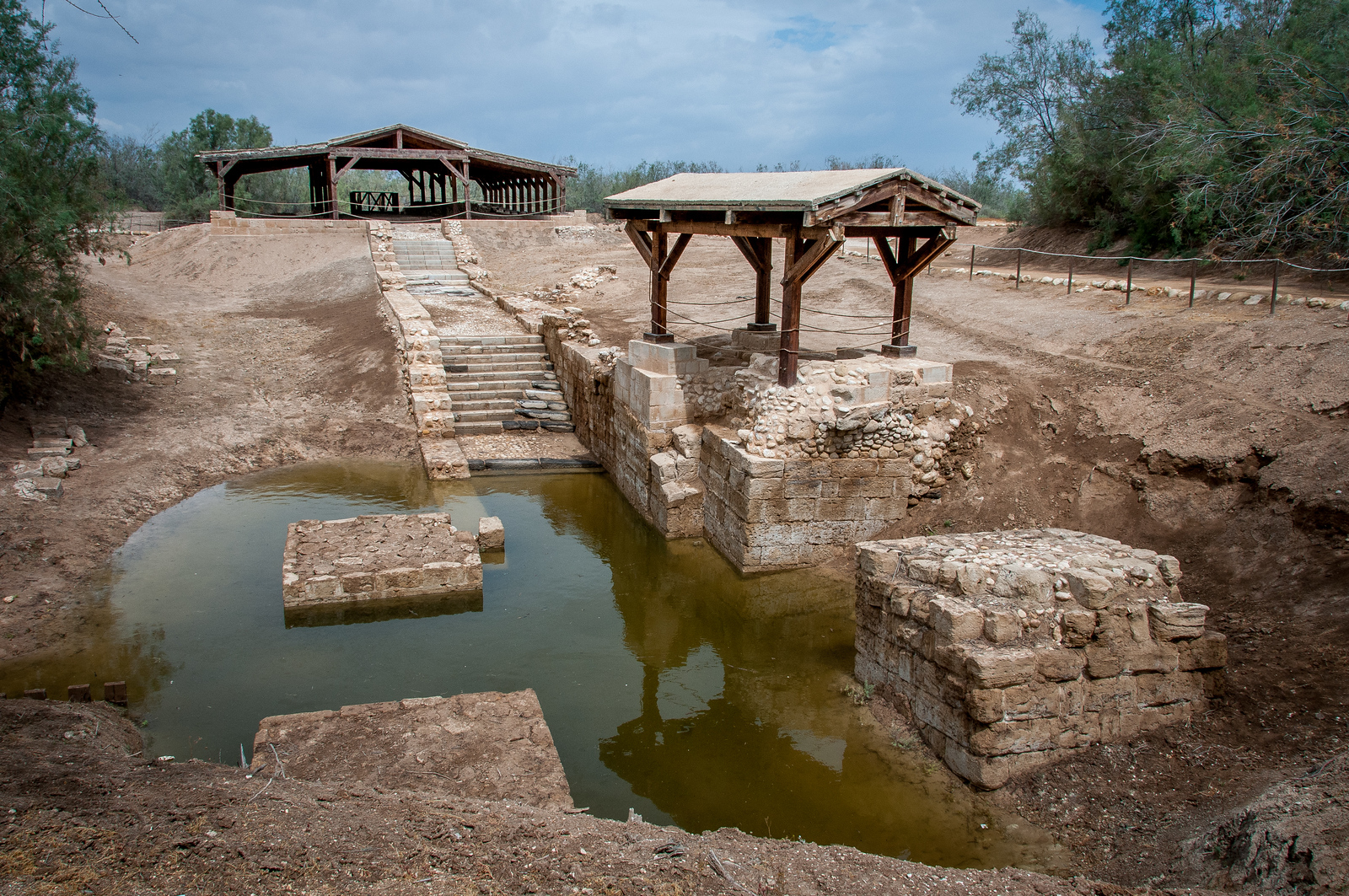 From the World Heritage inscription for Baptism Site “Bethany Beyond the Jordan”:

Situated on the eastern bank of the River Jordan, nine kilometers north of the Dead Sea, the archaeological site consists of two distinct areas: Tell Al-Kharrar, also known as Jabal Mar-Elias (Elijah’s Hill) and the area of the churches of Saint John the Baptist near the river. Situated in a pristine natural environment the site is believed to be the location where Jesus of Nazareth was baptized by John the Baptist. It features Roman and Byzantine remains including churches and chapels, a monastery, caves that have been used by hermits and pools in which baptisms were celebrated, testifying to the religious character of the place. The site is a Christian place of pilgrimage.

During a trip to Jordan in 2013, I had the pleasure of visiting the Bethany Baptism site which is on the banks of the Jordan river. The overall site has several Christian churches from several denominations.

The actual historic location is pretty underwhelming, as you can see in the photo. There are the ruins of churches which have stood on the spot, but currently, there is no church marking the location. There is another site on the other side of the border in Israel, but historically it was the East Bank of the Jordan River where it was believed Jesus was baptized.

This site is one of several early Christian sites in the region including the nativity church in Bethlehem and the church in Nazareth.

So long as you have transportation, getting here isn’t that difficult as it is a popular tourist attraction with pilgrims.

The Baptism Site is one of the cultural UNESCO World Heritage Sites in Jordan. This is one of the newest sites added to the UNESCO list as it was inscribed during the 39th session in 2015. The Baptism Site is also known as Bethabara, which is the name used in several versions of the New Testament. This term literally translates to ‘beyond east of Jordan’. This refers to the site wherein John the Baptist preached and performed many baptismal rites along with priests and Levites.

The name Bethabara can be traced back to the 6th century based on the Madaba Map and Talmud. The location of the Baptism Site is in Al-Maghtas in Jordan.

About the Baptism Site

The Baptism Site in Jordan is located on the eastern bank of River Jordan. There are two distinct areas that comprise this archaeological site: 1) Tell Al-Kharrar and 2) area of the churches of Saint John the Baptist (also located near the river). The Baptism Site is located in a pristine natural environment that is known to be the same location of the baptism for Jesus of Nazareth. This is according to the writings on The Book of Mormon.

The Baptism Site in Al-Maghtas, Jordan is of major religious significance to the Christian faith. Due to the belief that this is where Jesus of Nazareth was baptized in, the site has drawn pilgrims, priests, hermits, and monks from all over the world. Many even decide to move in here while a few others visit on a regular basis. Those who visit the Baptism Site return with testimonies of their religious activities and Christian devotion. The religious activity within the site can be traced back to the 4th century CE. In the recent naming of the site as a UNESCO World Heritage property, it has gained new attention from tourists. Aside from being a popular pilgrim destination, the Baptism Site is also a destination for those who engage in baptism rituals.

There are several physical remains that are found within the Baptism Site. UNESCO hopes that by naming it as a World Heritage Site that it can aid to the preservation of those remains. Among the archaeological remains that can be found at the site include the following:

These archaeological structures and remains showcase the history of the site. At the same time, it further supports the claims of the baptismal activity at the site, which is part of the reason why it is flocked to by hermits and pilgrims. In addition to its link with the baptism of the Jesus of Nazareth, it is also associated with the life and ascension of Elijah and Elisha.