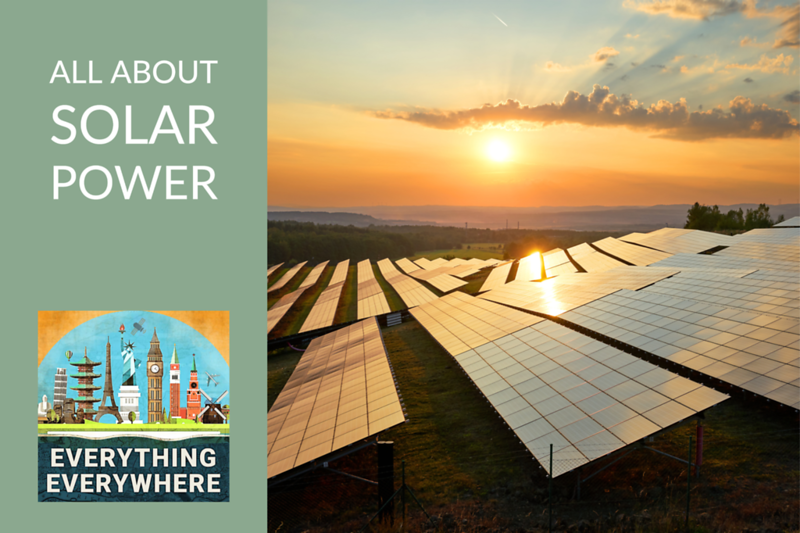 In 1839, a French scientist by the name of Edmond Becquerel was experimenting with an electrochemical cell when he discovered something interesting.

When it was exposed to light, it produced an electrical current.

For over a hundred years this was mostly a scientific curiosity. However, with the advent of the space age, this curiosity began to find practical uses.

Learn more about solar cells and solar power, its history and how it works, on this episode of Everything Everywhere Daily.

As I noted in the introduction, the discovery of the photovoltaic effect dates back to 1839. Edmond Becquerel was experimenting with a liquid electrochemical cell and he found that when exposed to sunlight, a very weak current would be produced.

This was interesting, and Becquerel documented what he found, but he neither understood why it was happening, nor did he realize any practical use for what he discovered. I should note, he was 19 years old when he made this discovery.

Nothing was done with this discovery for decades. It wasn’t until the late 1870s and early 1880s that a host of experiments were done with the element selenium.

In 1873, an English engineer by the name of Willoughby Smith found that selenium exhibited a photovoltaic effect, and in 1883, American inventor Charles Fritts created the first real solar cell by putting a thin layer of gold on a thin layer of selenium.

This first solar cell wasn’t very good as it only had an efficiency of 1%, but it was a start.

There was very little advancement in the practical design and development of solar cells over the next several decades. The effect was simply too weak to be of use.

What did happen, however, was advancements in the theoretical understanding of light and matter. Albert Einstein won his Noble Prize for his explanation of the photoelectric effect.

In 1940, a Bell Labs researcher by the name of Russell Shoemaker Ohl made an accidental discovery. He was examining a piece of silicon that had a crack in it. He found that this particular piece of silicon had an electrical current when exposed to light.

It turned out that there were impurities in the silicon on either side of the crack such that one side was positively doped and one side was negatively doped. This inadvertent discovery was the first p-n junction.

This all came together in 1954 when Bell Labs, who, if you remember from a past episode, invented pretty much everything, released the world’s first practical silicon-based solar cell.

This solar cell had a whopping 6% efficiency.

The intent was to create a power source for warm, humid areas to power telephone systems, where regular batteries would quickly degrade.

When the solar cell was announced at a press conference, it powered a small Ferris wheel and a small radio transmitter.

The New York Times said that the new invention “may mark the beginning of a new era, leading eventually to the realization of one of mankind’s most cherished dreams–the harnessing of the almost limitless energy of the sun for the uses of civilization.”

One year later, Hoffman Electronics released the first commercial solar cell. It was a single cell that sold for $25 and was 2% efficient, but the cost per watt was $1,785. That is a number to remember.

The theoretical maximum efficiency for a solar cell with a single p-n junction optimized for sunlight is only 33.16%.  However, it is possible to get around this, as we’ll see in a bit.

There still wasn’t really much demand for these devices. They were still expensive and inefficient, and there weren’t many use cases.

There was eventually a use case that arose that solar cells were not only a perfect fit, but they were also really the only solution: satellites.

When NASA launched their second satellite into orbit, Vanguard 1, they needed a power source. A battery would have quickly been depleted in a matter of weeks. The solution they chose was solar cells.

Six solar cells were attached to the body of the satellite with a total of 100 cm2 of area. This allowed the satellite to remain in service from March 1958 until May 1964. No battery could have possibly lasted that long.

The history of solar cells entering the 1960s and onward is one of continual, incremental improvements in efficiency and price.

The potential of solar cells was evident from the very beginning. The big problem was cost. In particular, the cost per watt of electricity it could produce.

An expensive, efficient solar cell could be the same as a less efficient, cheaper cell from an economic standpoint.

The use of solar cells in satellites was great and all, but it did little to reduce costs. If you are launching a satellite, you aren’t really concerned about cost so much as you are about efficiency and reliability.

The 60s saw continued use in satellites, but it was the 70s that saw major advances in solar cells, mostly due to the energy crisis.

There have been many many advances in solar cells, most of which have been incremental, so it would be too time consuming to go through all of them, so I’m mostly going to focus on the cost per watt.

I should note that these are only the prices for raw solar cells, not the price per watt for the full installation of a system.

Today, the record for solar cell efficiency is 47.1% which was set in 2021. This was done using a cell with six p-n junctions and a concentrator, which is a lens that concentrates sunlight.

As of the end of 2019, there is an estimated 629 Gigawatts of solar power installed globally. The largest country, with over a third of the installed solar grid, is China. Behind China are the United States and India.

The countries with the highest percentage of their electricity coming from solar power are Honduras at 12.5% and Australia at 11%.

So far, I’ve talked about efficiencies and cost, which are both really important. However, there is a lot more to solar power than just these numbers.

There is one obviously major problem with solar power that I’m sure you are already well aware of. Solar panels do not produce any electricity when it is dark out.

Not only that, but the amount of power it can produce will depend on latitude, the number of days of sunshine, and the time of the year. There are maps which show how effective solar power is based on all these factors.

For example, the best cities for solar power in the United States are Honolulu and Phoenix, and the worst are Seattle and Anchorage.

This variability means that if you want to extensively use solar power you need one of two things: a grid that the power can feed into, or batteries.

Most solar installations will be connected directly to the electrical grid. The good thing about solar is that it tends sto product the most electricity at the same time when demand is the highest: in the middle of the day.

It can provide a variable amount of electricity into the grid, but it requires some other source to provide the base load of electricity. This would usually come from a gas, coal, or nuclear power plant.

In many jurisdictions, electrical companies have net metering for home owners with solar installations. They will pay you for electricity you produce and put into the grid, and then you pay them for whatever you use from the grid.

The grid functions as a battery.

The other option is to use batteries to store the electircity. This sounds simple but it completely changes the cost equation for solar. In addition to solar pannels, you now need batteries, inverters, and other equipment

Moreover, grid scale batteries aren’t really a thing. There are a few large scale grid batteries which have been installed, but they are no where near able to support a whole grid.

The recently installed Big Battery in Victoria, Australia can store enough electricity to power one million homes… for 30 minutes.

There are battery alternatives that exist, but even these are limited. One of the best systems is pumping water from a lower reservoir to a higher one during the day and then letting it flow down using hydropower at night. However, you can only do this in places with the right geography.

I’ve done an entire episode on rare earth elements that I’ll refer you to for this subject.

CSP is pretty simple. You take a whole bunch of mirrors and shine them up at the top of a tower. The top of the tower collects the heat, usually through something like molten salt, and that is then used to boil water and turn a turbine.

CSP systems really only work at scale. You can’t really have a small system. You usually find these installations in deserts. You can find the Crescent Dunes Solar Energy facility outside of Las Vegas, Nevada, and it has 10,347 mirrors that focus solar heat onto a central tower that holds 32,000,000 kilograms of molten salt.

It took two months to melt all of the salt, and once melted it should remain molten during the entire operation of the plant. The heat from the molten salt can continue providing energy even after the sun has set.

Solar power has gotten significantly cheaper and more efficient over the last 70 years. Its share of the global energy market has increased commensurately and will continue to grow into the future.

However, there are still major hurdles that solar power has to overcome in terms of its variable production and energy storage. Unless those problems can be overcome, solar will remain an important, but only partial, part of the energy solution.

Today’s review comes from listener Edgar Guerrero over at Apple Podcasts in the United States. He writes:

Awesome podcast, very well explained and full facts. Keep (up) the great work Gary!!! FYI if come to Sonoma county I (have) tons of wine for you!!!

Thanks Edgar. It has been a while since I’ve been to Sonoma, but if I am ever back out that way again, and I’m sure I will be at some point, I’ll set everyone know.