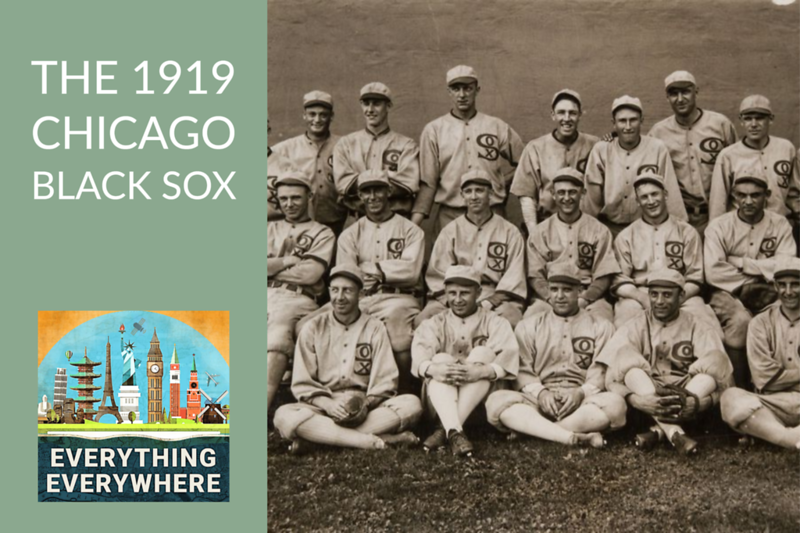 While Cincinatti won the championship on the field five games to three, the series will be forever remembered because of the events surrounding it. Even a hundred years later, it remains one of the most significant events in American professional sports.

Learn more about the 1919 Chicago Black Sox scandal, and how it almost destroyed the game of baseball, on this episode of Everything Everywhere Daily.

In case you are not a sports fan or you know nothing about the sport of baseball, this story really has nothing to do with sports per se.

It does involve athletes and a sporting event, but that really isn’t the story.

The real story is one of economics, greed, and crime.

To understand what happened, you need to know the state of baseball in the early 20th century.

Baseball began as a professional sport in 1869 with the establishment of the Cincinnati Reds. This step from amateur to professional was a big step, but it didn’t mean that men playing baseball for money were making very much at it.

Over the years, baseball grew, and more professional teams were created. Different leagues appeared and died. Eventually, there were two major baseball leagues: the American League and the National League.

In 1903, they eventually agreed that the winner of each league would meet in an annual championship game dubbed the World Series.

Despite bigger stadiums and larger crowds, baseball still wasn’t a huge moneymaker for most players. If you were a major league baseball player, you still probably needed to get a job during the off-season.

The owner of the Chicago White Sox was Charles Comiskey.

Comiskey was a former player and was actually one of the leaders in a player revolt that took place in 1890.

In 1894 he purchased a team in Sioux City, Iowa, named Sioux City Cornhuskers. He moved that team to Saint Paul, Minnesota, where it was renamed the Saint Paul Saints, and then moved the team again to Chicago to join the new American League.

He renamed the name the Chicago White Sox.

The elimination of the reserve clause in 1975 was largely responsible for the explosion in player salaries that came after.

Charles Comiskey had a reputation for being very cheap. He was perceived as not paying his players very much, even though later analysis showed that he was about average for a team owner of that period.

On the team, there were two groups of players. One was a group of straight-laced players, and the other was a group of, how shall I say, more morally flexible players.

The two groups, from all accounts, didn’t particularly like each other and kept to themselves, but baseball is a team sport that doesn’t require a lot of cooperation.

It was in this atmosphere of player resentment and low salaries that the events of September and October 1919 took place.

Gamblers and mobsters always floated around the periphery of major league teams at that period. The low wages of players made them easy targets for bettors who wanted to fix games, or at least who wanted inside information.

However, fixing an entire series of games requires more than just one or two players. You really need to get a whole bunch of players involved; otherwise, it just wouldn’t work.

The idea for fixing the World Series was hatched between the White Sox’s first baseman, Arnold “Chick” Gandil, and a Boston gambler named Joseph “Sport” Sullivan.

Both of them knew they had to get other players on board, so on September 21, they held a meeting at the Ansonia Hotel in New York City. There were a small group of players in this meeting who heard the pitch from Gandil and Sullivan.

In addition to Gandil, the initial players who were in on the fix were pitchers Eddie Cicotte and Claude “Lefty” Williams, shortstop Charles “Swede” Risberg, and outfielder Oscar “Happy” Felsch.

One of the bench players, an infielder, named Fred McMullin, was added to the plot when he overheard the scheme and threatened to turn them in if he didn’t get a cut.

The final player they approached was the star player on the team and arguably one of the greatest baseball players of all time, “Shoeless” Joe Jackson.  More on him in a bit.

The fix of the World Series quickly became a very poorly kept secret in the underworld. The White Sox were initially 3-to-1 favorites over the Reds, but a sudden flood of money on Cincinnati to win quickly and dramatically shifted the odds.

The scheme got a lucky break when the starting pitcher for game one, Red Faber, came down with the flu. Faber wasn’t in on the plot so the pitchers for the first two games were Eddie Cicotte and Lefty Williams, both of whom were part of the conspiracy.

On the second pitch of the first game, Eddie Cicotte hit the Reds leadoff hitter Morrie Rath. This was the signal to the gamblers that the players were going to go through with the plan.

The fix was such a poorly kept secret that during game one, it was already being discussed in the press box, and writers were already on the lookout for plays that seemed suspicious.

The White Sox lost the first two games with two crooked pitchers. They won game three and then lost games four and five.

At this time, the World Series was a best of nine series, not a best of seven series as it was today.

According to the original agreement, the players were supposed to receive $20,000 after every loss so that they would have the full $100,000 after the loss of the fifth game.

However, by the time they were down 4-1, they hadn’t been paid what they were owed.

The players then wanted to renege on the deal and proceeded to win the next two games to bring the series to 4-3 going into game eight.

At this point, some of the players were getting threats against their families from mobsters.

In game eight, Williams was the starter, and the Reds ended up winning 10-5, clinching their very first World Series.

The rumors of the World Series being fixed kept circulating after it was over. A writer by the name of Hugh Fullerton wrote an article for the New York Evening World titled “Is Big League Baseball Being Run for Gamblers, With Players in the Deal?”

However, for the most part, the powers that be in baseball were happy to ignore the rumors and just let the issue rest.

The event which broke the dam on the story occurred in August of 1920 when evidence of a fixed, regular-season game between the Chicago Cubs and the Philadelphia Phillies came to light.

A grand jury was convened to investigate gambling in baseball, and their attention soon turned to the 1919 World Series.

As the end of September rolled around, the White Sox were once again in contention for the American League title. They were in a race with the Cleveland Indians, and if they won their last three games, they could win the title.

However, on September 28, Eddie Cicotte testified to the grand jury that he received money for throwing the world series. After this, the floodgates opened, and more players and gamblers confessed.

Comesky suspended all of the remaining seven players who were still on the team, which resulted in the White Sox losing two of their next three games and coming in second in the league. Gandil had been sent to the minor leagues by this point.

Comesky also gave each of the 10 players who didn’t take a bribe $1,500, which was the difference between the winners and losers bonus from the World Series.

The players who took bribes were all put on trial in July of 1921.

The funny thing was, all of their signed confessions for the grand jury disappeared while in police custody, as well as much of the other evidence which was collected.

All eight players who were put on trial were found not guilty after just three hours of deliberation.

However, the legal aspect of this case wasn’t what has had a lasting impact.

Prior to the 1921 season, the major league baseball owners hired someone to serve as a commissioner for all of baseball. He would be responsible for the rules of the game and for clearing it up to protect the game’s public image.

One of his very first acts as commissioner was to ban all eight players who either received money or who knew about the deal for life. They were ineligible not just to play baseball, but they couldn’t even attend a professional baseball game as a spectator.

For the most part, seven of the men who were banned were middling ballplayers at best.

But one of them, Joe Jackson, was great, and his role in the scheme has always been in doubt.

If he tried to throw the series, he did a horrible job. He hit the only home run in the series. He batted .375, which was the highest for a regular player in the series. He had 12 hits, which stood as a World Series record for 50 years. He had 30 chances in the outfield, throwing out 5 runners with zero errors.

Also, he was never in on the initial meeting, and all of the implicated players admitted they only brought up his name to make the deal seem more impressive to the bettors.

Jackson admitted to taking $5,000 dollars but said it was given to him without any conditions.

Collectively, the eight men banned became known as the Black Sox. They became the subject of popular movies such as Eight Men Out and Field of Dreams. It even had a mention in the novel the Great Gatsby.

There is an apocryphal story that is attributed to a child who walked up to Jackson outside the courthouse and asked him, “Say it ain’t so, Joe”. This has now become a popular phrase used when heroes let you down.

After suspending many of their best players, the White Sox sunk to seventh place and didn’t win another World Series until 2005. It was known as the curse of the Black Sox.

The scandal and the discovery of other regular-season games which were fixed threatened the integrity, and popularity of baseball. One of the things which saved it was the incredible popularity of a single-player named Babe Ruth.

Shoeless Joe Jackson died in 1951, still banned from baseball. Despite having the third-highest career batting average in baseball history, his ban extends to today, resulting in him not being eligible for the Baseball Hall of Fame.