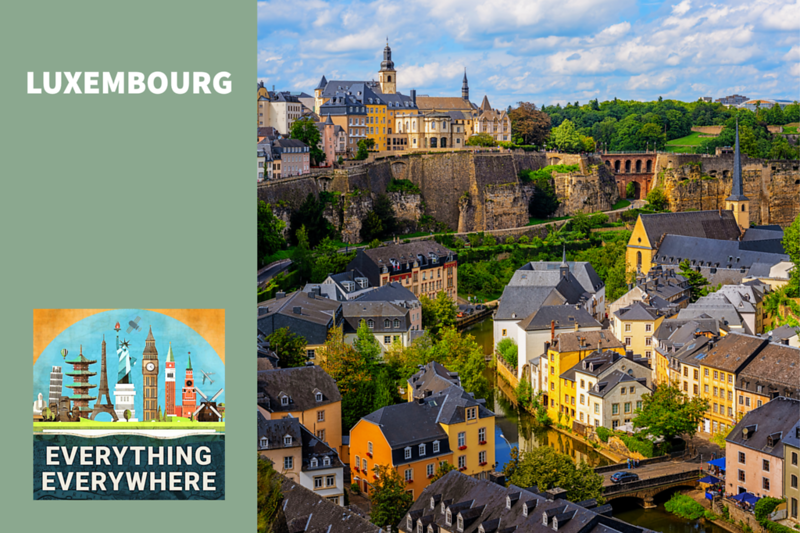 Sandwiched between the nations of Germany, Belgium, and France is one of the smallest countries in the world.

Given its location, it is a blend of cultures and languages. Likewise, its history has been defined by its neighbors. Yet despite being surrounded by other countries for a thousand years, it has managed to survive into the 21st century as an independent country.

Learn more about the Grand Dutchy of Luxembourg and what exactly a Grand Dutchy is on this episode of Everything Everywhere Daily.

Luxembourg is what I could categorize as a small country, but not a microstate like Liechtenstein or Monaco.

What is the cutoff you ask of a small country versus a microstate? Well, there really isn’t anything official, but in my definition, it would be if you could see it on a world map.

You can see Luxembourg. You can barely see it, but you can see it. In fact, I could go so far as to say that Luxembourg is sort of cutoff for what is a small state and what is a microstate.

For those of you in the US, Luxembourg is 82% the size of Rhode Island.

With that out of the way, the story of Luxembourg, as far as it becoming a country, goes back about 1,000 years.

In 963, the Count of Ardennes, Siegfried, established a castle in what is today Luxembourg City. The castle was built on the rocky cliffs overlooking the River Alzette, and it was called the Lu-ci-lin-bur-huc, which means “little fortress.”

Lucilinburhuc is the origin of the word Luxembourg.

Siegfried was the origin of the House of Luxembourg-Ardennes. The Ardennes is the name of the dense forest hilly area which constitutes most of Luxembourg.

The forest and the castle made Luxembourg a very difficult place to attack.

As with almost every other part of Europe, over the next several years, it changed hands, being ruled by the Duke of Burgundy in France and then finally by the Hapsburgs and the Holy Roman Empire.

The House Luxembourg, one of the Royal Houses in the Holy Roman Empire, produced several emperors, including Henry VII and Charles IV.

The modern beginnings of Luxembourg began during the French Revolution when it was conquered by the Republic of France. It remained under French control until the defeat of Napoleon in 1814.

Luxembourg at this time was much larger than it is today. Well over twice the size.

At the Congress of Vienna, which was convened to reorganize Europe after hurricane Napoleon blew threw it. Luxembourg couldn’t go back to being part of the Holy Roman Empire because it didn’t exist anymore.

Both Prussia and the Netherlands claimed Luxembourg. The compromise they came to was that parts of Luxembourg were given to Prussia. This was about 24% of the area of Luxembourg. Today, most of that land is part of the German state of Rheinland-Pfalz.

The other part of the compromise was that Luxembourg would be in personal union with the King of the Netherlands. That means the Dutch King would also be the monarch of Luxembourg as a separate title. This is similar to how Australia and the United Kingdom are in a personal union because they both have the same monarch as head of state.

To make up for having territory taken away, the status was upgraded from a dutchy to that of a Grand Dutchy.

A Grand Dutchy is just a region that is ruled by a Grand Duke. It is a title that wasn’t used that often but was sometimes used in the past. Finland and Lithuania both used to be Grand Dutchies. Today, Luxembourg is the only Grand Dutchy in the world.

The Belgian Revolution of 1839 saw the southern provinces of the Netherlands break away to form the new country of Belgium. Belgium claimed all of the Grand Dutchy as their own.  Most of the population of Luxembourg took part in the rebellion, but the citadel in Luxembourg city never fell.

The end result was that Luxembourg lost 65% of its territory to Belgium, which compromises the Belgian province of Luxembourg today.

This region, which is in the Ardennes forest, is where much of the Battle of the Bulge was fought in World War II.

With Belgium and Prussia both taking most of its land, that is the reason why Luxembourg is so small today.

The end result was a treaty in London where Luxembourg was guaranteed its independence and neutrality.  Known as the Luxembourg Crisis, this was a leadup to the Franco-Prussian war of 1870.

In 1890, Willem III died without a male heir. His daughter Wilhelmina became Queen of the Netherlands, a position she held until 1948.

In Luxembourg, the crown couldn’t pass to a woman while a male relative was still alive. So, the Grand Dukedom was passed to Adolphe, the Duke of Nassau.

His son, William IV, got the law changed so his daughter could succeed him.  There were two Grand Dutchesses of Luxembourg in the 20th century.

The neutrality of Luxembourg didn’t do them much good during both world wars.

Luxembourg was occupied by German troops during world war I, despite being officially neutral. The soft stance of the Grand Dutchess Marie-Adélaïde resulted in her abdication in 1919 after the war.

Just days after the Nazi invasion of Poland in 1939, Luxembourg again publicly declared its neutrality, and again it meant nothing. On May 10, 1940, the Germans swept through the country, seizing the capital Luxembourg City before noon.

No one was killed on either side of the conflict.

The Government and the royal family fled the country and ruled in exile. The future Grand Duke Jean actually took part in the invasion of Normandy.

The Germans declared Luxembourgers to be German citizens and conscripted 13,000 men to fight, of whom 2,848 were killed. Over 2,000 Luxembourger Jews were killed in the Holocaust, and over a third of the buildings in the country were destroyed during the Battle of the Bulge.

After the war, Luxembourg removed its neutrality provision from its constitution. They became charter members of the United Nations in 1945 and of NATO in 1948.

In 1948 they also joined the Benelux Economic Union with Belgium and the Netherlands. This union has changed over the years as the European Union has superseded many of the original terms of the agreement. Today it focuses on cooperation in other areas, including police forces working together, recognizing academic degrees, and the promotion of cycling.

Luxembourg was also one of the original signatories of the Treaty of Paris in 1951, which established the European Coal and Steel Community, which became the precursor of the European Union.

On top of all of these international organizations, which they helped establish, they were also a founding member of Eurovision. They have won the contest five times in 1961, 1965, 1972, 1973, and 1983. Only Ireland and Sweden have won more.

Most people might have heard of one small village in Luxembourg, even if they didn’t realize it: the village of Schengen. This was where the Schengen Treaty was signed, which allowed for the free travel of people within Europe without passports.

Schengen was selected as the location to sign the treaty as it is the closest place to the tri-border of Luxembourg, Germany, and France.

It ranks near the top of almost every international index. It has one of the highest per capita GDP’s in the world at $135,000.

It ranks 5th in terms of economic freedom, in the top 20 of the UN’s Human Development Index, and 4th in the Economist Magainze’s Quality of Life index.

It is also one of the safest countries in the world. The murder rate per capita is 0.3, which puts it just slightly behind Japan and Singapore.

One of the odd things about Luxembourg is its language. The only official language in Luxembourg is Luxembourgish, which is a germanic language heavily influenced by French.

Luxembourgish is similar to Swiss German in that it is mostly a spoken language. Laws and other administrative texts in the country are in French or German.

That being said, German and French are also known by almost everyone, and English is widely spoken and taught in schools.

Luxembourg does not have a great tradition of sports. Since it first participated in the Olympics in 1900, it has only won 2 medals at the summer games in its history. A silver medal in weightlifting in 1920 and the gold medal in the men’s 1500m in 1950.

They did also win two medals in alpine skiing at the Winter Olympics, but they were both won by Marc Girardelli, who was born in Austria and only moved to Luxembourg due to a coaching disagreement.

They have never qualified for a world cup.

I’ve personally visited Luxembourg twice. The first time I visited intentionally to explore Luxembourg City. The second time I was in the city of Trier, Germany. On my way out of the city, I told my guide I had to get gas before I left, and he told me to go to Luxembourg for gas as it was significantly cheaper.

I did some genealogy, and I found out that I am, in fact, part Luxembourger.

In addition, though totally different branches of my family tree, I’m also part Belgian and Duch, so I guess I’ve hit the Benelux trifecta!

Despite its early growing pains, several countries taking land from it, and having been overrun in two world wars despite being neutral, tiny Luxembourg has become a success story.

Luxembourg is one of the few countries which have lived up to its national motto, which in Luxembourgish is “Mir wëlle bleiwe wat mir sinn”

Which means, “We want to remain what we are”

Today’s review comes from listener Llamaramabanana,  over at Apple Podcasts in the United Kingdom. they write:

This podcast does a great job of covering huge topics in concise 10 minute episodes. As a scouser, my favourite is the 5th Beatle episode! I’d love to hear an episode on the history of my city at some point! Stay curious, Gary!

Thanks, Llamaramabanana!  I’ve been to your lovely city several years ago. I got my hair cut while I was Liverpool and I had a conversation with my barber. To this day I have no idea what he said given how thick his scouse accent was.

Also, I don’t know if you are a Liverpool or Everton fan, but I did a tour of Anfield. I got see the locker room, walk on the pitch, and learn about their history, and afterwards I made Liverpool my premier league team. They reminded me the most of my NFL team, the Green Bay Packers.

I think there are some more Liverpool themed episodes that are out there.