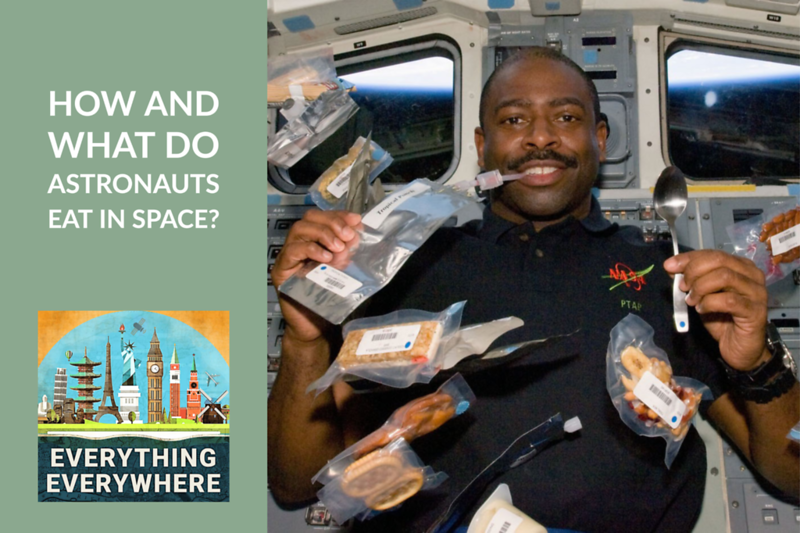 When the space race first began, scientists didn’t even know if it was possible for humans to eat in a zero-gravity environment. Once they figured out it was possible, it didn’t mean that it wasn’t without problems.

There was a host of issues with eating in a zero-g environment that had to be overcome. Some foods were able to be made edible in space, and some never were.

Learn more about what astronauts eat in space and how they do it, on this episode of Everything Everywhere Daily.

I wanted to let all of you know that the one-year anniversary of this podcast is coming up soon on July 1.

In celebration, I’d like to do a special episode and answer all of your questions.

Likewise, you can also ask on the Discord server or you can directly send me an email at [email protected].

Send in whatever questions you have and I’ll try to answer as many as possible. If I have a lot, I’ll split them up into more than one show and spread them out.

You can find my email address and links to my social media accounts in the show notes.

As I noted in the introduction, it wasn’t even known at first if it was possible to eat in a zero-gravity environment. Chewing, swallowing, and digestion all follow a downward path which is helped, at least in part, by gravity.

It would probably work, given that you can swallow food upside down, but you never really know until you try it.

The plan they came up with for the very first space travelers was puréed food which was put in the equivalent of toothpaste tubes. This would then be consumed by sucking it through a straw.

The initial meals were based upon military rations, modified to be used in space.

Oddly enough, the Soviets and the Americans, who were not sharing information with each other, initially came to the same solution for the problem of eating in space.

When Yuri Gargarin first went into space, he had two tubes of puréed meat and one tube of chocolate sauce.

The first two American space flights were suborbital and only lasted 15 minutes, so the Astronauts didn’t bother eating anything.

During John Glenn’s flight which consisted of three orbits around the Earth, he had tubes of applesauce, pureed beef and vegetables, and some sugar tablets in water.

What the Soviets and Americans both discovered independently was that humans can in fact eat and digest in space.

When the Soviets sent their second cosmonaut into space, they discovered something new. Gherman Titov became the first person to vomit in space.

Now called Space Adaptation Sickness, it is a form of motion sickness which affects almost 75% of everyone who goes into space. While you can eat in space, that doesn’t necessarily mean that you can keep everything down in space.

As the Mercury Program flights became longer, they tried eating more types of foods. In particular, in addition to the pureed foods, they tried dehydrated powders. This was the period that gave us Tang, which was actually developed back in 1957.

The reviews of the Mercury Astronauts on the food they were given weren’t good. For starters, freeze-dried foods proved difficult to rehydrate in zero-g, and most importantly, the food didn’t taste very good.

In the first Gemini mission, Gemini 3, John Young snuck a corned beef sandwich on the flight because it was the favorite sandwich of the commander Gus Grissom. This was totally in violation of the mission protocols and it was done in secret.

This was a bigger deal than it might seem and illustrates one of the reasons why the astronauts were given the equivalent of baby food to eat.

Bread has crumbs. Crumbs in space can float all over the cabin, get inside of sensitive electronics, and potentially cause a short circuit. They ended up not eating the sandwich and got chewed out when they got back.

One of the biggest developments during the Gemini program was the creation of freeze-dried foods. Freeze drying actually is a great way to preserve food even if the process is a bit involved.

As the name suggests freeze-drying involved bringing the food below freezing, then exposing it to a vacuum. The water in the food sublimates, meaning it goes directly from a solid to a gas.

They introduced the spoon-bowl system where astronauts could eat out of a ziplock bag with a spoon. Also called wetpacks, the moisture was contained in the bag and the food didn’t have to be rehydrated.

They also created a way for food to be rehydrated with both hot and cold water. Previously, everything was done only with cold water.

Despite the improvement, the Apollo program food still wasn’t great. The longest mission was only 12 days, which is short enough to just suffer through with standard astronaut fair. All of the Apollo astronauts lost weight and the dieticians realized they weren’t consuming enough calories.

The Skylab program involved much longer stays in space, up to three months. This would be far longer than any previous space missions and issues of nutrition and taste became more important. For extremely long-term missions, the psychological well-being would be improved by a greater variety of foods.

One thing that they did on Skylab was introduced a refrigerator and a freezer. For the first time that allowed for perishable food in space. Previously, everything had to be shelf-stable.

Skylab also had a dedicated kitchen and dining area.

The number and types of food available to Skylab astronauts were dramatically larger than in previous programs. 72 different types of food were available including items such as shrimp cocktail, chili, ham, steak, asparagus, and mashed potatoes.

The Soviets had their own space station, the Salyut 1, and they were actually growing their own food. They grew tomatoes and cucumbers, growing and eating the first space produce. It wasn’t a big garden, but it was something.

On the Apollo-Soyuz mission, which I had discussed in a previous episode, the two crews shared their food. The Soviets had canned beef tongue, borscht, and caviar.

With the advent of the Space Shuttle program and eventually the International Space Station, astronauts from many more countries began flying in space. That meant more foods from other cultures.

In most of these cases, a lot of development went into creating a version of the food that was suitable for space. The South Koreans spent over a million dollars to create their space kimchi.

In the 1980s, at the height of the cola wars, both Coke and Pepsi created cans that could deliver a carbonated beverage in space. In 1985, on STS 51, they tried the cans created by both companies, but the results were very mixed and they never tried it again.

One of the specially designed Coke cans is currently at the National Air and Space Museum in Washington DC.

Today, astronauts can request foods and what is sent up to the ISS will often be what they want. Many astronauts prefer spicy food when they are in space because without gravity, their heads get congested and they can’t taste or smell as well.

One of the big problems for the future of space food will be feeding a crew on a mission to Mars.

Even on a year-long International Space Station mission, the crew is resupplied every few months. A mission to Mars will not be able to be resupplied

Also, once astronauts get there they may have to grow food on the Martian soil, which has never been done before.  In fact, Martian soil isn’t even really soil given there is not any microbial life in it, and possibly no nutrients for plants.

Entirely new methods of crop product and food storage will have to be developed to make a Mars mission possible.

There has been a lot of advancement in the area of space flight in the last few years, and are getting closer to the day when civilians and tourist might be able to fly in space.

When that day happens, you too might be able to have some freeze-dried ice cream or canned beef tongue in zero gravity.

Remember if you leave a review, you too may have your review read on the show….even if your review doesn’t use complete sentences.