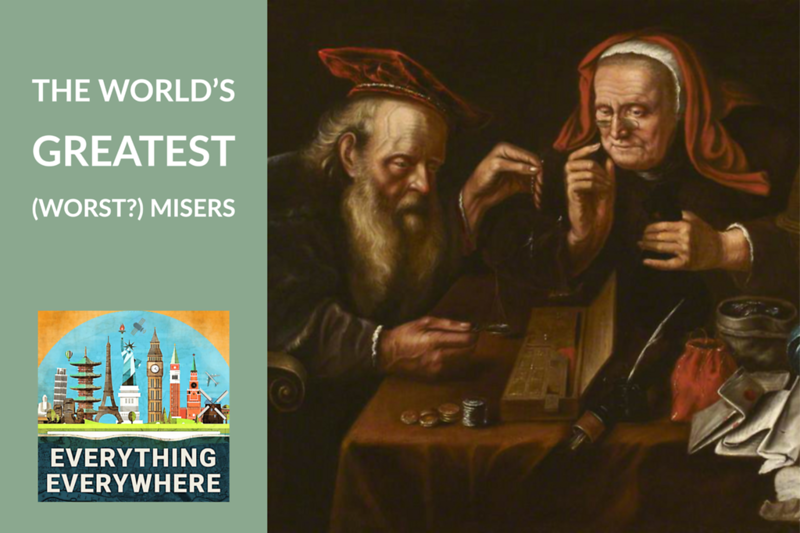 Have you ever known someone who was really cheap? Like they would wear clothes until they disintegrated? Or they would never pick up the tab? Or maybe they are horrible tippers?

Well, there is cheap and then there is cheap. Some people are so cheap that they appear to live in destitute poverty, even though they actually be quite wealthy.

This is the world of misers.

Learn more about some of the world’s most famous misers, and their unbelievable stories, on this episode of Everything Everywhere Daily.

To start this discussion, I should note that I’m not going to be talking about people who parsimonious. Just because you happen to be wealthy doesn’t mean that you have to live like Richie Rich.

For example, Warren Buffet, who is worth over $100 billion dollars has lived in the same home for over half a century that is only worth $500,000 dollars, and he famously only drives used cars. However, he does rent private jets to travel and otherwise lives like a normal person.

Likewise, J. Paul Getty famously had a pay phone in his mansion and refused to pay ransom when his grandson was kidnapped. He did eventually agree to loan his son money for the ransom, but then charged him interest on the loan.

These people might have been frugal, but they weren’t misers.

What I’m talking about are the extreme cases of people who would go far far out of their way to save insignificant amount of money, yet were so rich that it made no sense to do so.

People who were so cheap, that it was probably pathological.

The first person from history I’ll highlight is one of the inspirations for the character Ebenezer Scrooge: John Elwes.

Elwes was an 18th century miser and, belive it or not, a member of the British Parliament.

His uncle who raised him for much of his youth was also a miser, and they would often sit at night, sharing a single glass of wine, and complaing about how wasteful other people were.

As an adult, he would go to bed when the sun set so he didn’t have to spend money on candles.

Rather than ride in a coach, he would walk in the rain. Then, he would just sit in wet clothes rather than building a fire, because he would have to pay for the wood.

He wore shabby clothes with holes in them and looked like a begger. People would often give him money when he walked down the street.

Wigs were in style at the time, and he once found one someone threw away sitting in a bush. He wore it for weeks.

He once came across a dead rotting sheep. He took it home and managed to make meals for two weeks.

He complained about birds robbing him of hay on his farm.

He once injured both legs walking home and had to go to the doctor. He only had one leg treated, then bet the doctor the value of the treatment that the untreated leg would heal faster. He won the bet and paid nothing.

He owned several estates, but refused to spend money on upkeep or repairs on any of them.

For someone who was so paranoid about spending money, he lent it freely to other aristocrats and often played cards for thousands of pounds.

It is believed he only had a single pair of clothes, which he slept in as well.

The next great miser is another Englishman who was a contemporary with Elwes: Daniel Dancer.

Dancer wasn’t as wealthy as Elwes, but he did have 80 acres of land, which would have made him far above average in 18th century England.

When he inerited his parents farm, he immediately set about doing nothing with the land. Literally nothing. He refused to spend the money required to buy seed and cultivate the land.

He lived with his sister, and they would eat a single meal a day, with all the week’s food preapred in advance on Sunday.

When his sister became ill, he refused to pay for a doctor saying “if the ‘old girl’ was going to die the doctors couldn’t save her anyhow.”

He was so paranoid of being robbed that he permanantely locked the door to his home and would enter via an upper story window by a ladder. He would then pull the laddar up behind him once inside.

His one extravagance was that every year, whether he needed to or not, he would buy a new shirt.

A neighbor accused his dog of attacking his sheep. Dancer did the cheapest thing possible. He took his dog to the town blacksmith and had its teeth removed.

She was born a Quaker, which probably influenced her spending and lifestyle habits.

In both of these inheritances, most of the money was in a trust which Hetty couldn’t control. She simply recieved income.

I mention this, becuase before we getting into Hetty the miser, we have to talk about Hetty the investor.

While Hetty did inherit a lot of money, she didn’t sit on it. She was extremely shrewd and was one of the top stock investors in the United States in the 19th century.

Hetty was a contrarian investor. She describe her investment strategy as follows: “I buy when things are low and nobody wants them. I keep them until they go up and people are crazy to get them. That is, I believe, the secret of all successful business.”

Her strategy wasn’t all that different from Warren Buffet.

Like Buffet, her buy and hold approach paid off handsomly.

She wasn’t just lucky. She did an incredible amount of research before investing in something.  She became known as the Queen of Wall Street, and later the Witch of Wall Street due to always wearing a black dress.

In Ken Fisher’s 2007 book, “100 Minds That Made the Market”, he states that Hetty was one of the best investors of the Gilded Age, and her performance was far better in the long run than other high profile investors who had spectacular gains, but eventually went bankrupt.

When Hetty got married, her husband had is own wealth, but it was much less than Hetty had. She requried him to sign an early verison of a prenuptial agreement before the wedding.

What really made Hetty famous wasn’t her investing accument, which was considerable, but rather her thriftiness.

The stories of her penny pinching are legendary and it is hard to separate the fact from the fiction.

Hetty didn’t live in a house that she owned. She spent her life after he husband died living in boarding houses.

She owned a single black dress that she wore every day. She asked her cleaning woman to only wash the dirty parts to save money on soap.

She didn’t have an office. Rather, she used a room at the bank where she held much of her money.

The rumor was she only at oatmeal which was heated on the radiator at the bank.

She personally never used heat or hot water, as it cost too much money.

She supposedly once spent an entire evening trying to find a 2-cent stamp that she lost.

When her son was injured, she took him to a free clinic for the poor, waiting days to get him admitted. That delay eventually resulted in him losing his leg.

Part of her frugality came from not wanting to pay property taxes, which is why she didn’t own a home or an office.

Unlike other misers, Hetty wasn’t a reculuse. She gave interviews to the media occasionally and was always interacting with people.

Although most poeple didn’t know it, she secretly gave sizable sums of money to various charities. She insisted that charity should be done anonymously and not for self agrandisement.

She also personally bailed out the City of New York several times extending them loans. During the Panic of 1907, she cut a check for $1.1 million dollars for the city.

It is estimated that her total net worth in today’s inflation adjusted currency would have been worth about $5.3 billion dollars. Almost all of that was earned by herself through her investing.

She was unqestionably the richest woman in the world when she died in 1916.

So, if you are the person your friends call cheap or a skinflint, the next time you are out raise a glass of warm water with a ketchup packet to the greatest cheapskates of alltime: John Elwes, Daniel Dancer, and Hetty Green.

I love these short stories, and the fun topics!

Thank you very much Golddeer9. As I’ve noted before, if you keep listening, I’ll keep making them.

Remember, you too can have your review read on the show. Just leave a review on sites such as Apple Podcasts or Podchaser.