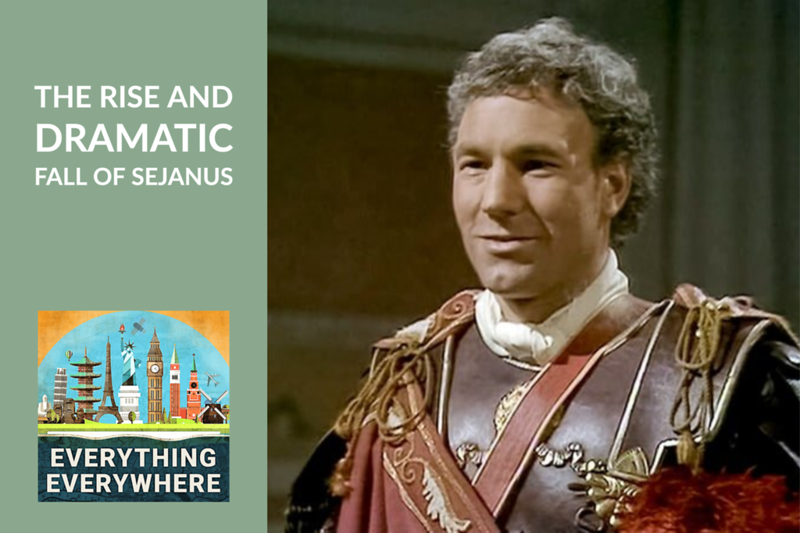 The second Roman emperor was Tiberius. His right-hand man was the leader of his Praetorian Guard, Lucius Aelius Seianus, known to us as Sejanus.

Over the years, Sejanus slowly gained power and influence as well as a host of enemies throughout Rome. Eventually, however, all of his social-climbing and power acquisition eventually came to an end in one spectacular and disastrous day.

Learn more about Sejanus and his spectacular downfall, on this episode of Everything Everywhere Daily.

Father’s day is right around the corner, and there are no better gifts for your dad than some gear from Scottevest.

Scottevest has a father’s day promotion where you can get 30% of select items over at Scottevest.com. This includes a selection of vests, jackets, sport coats, shirts, pants, and of course the Scottemask.

All Scottevest products have extra pockets and are designed for you to carry your gear in comfort and style. You can carry your smartphones, tablets, glasses, passports, and water bottles

The Emperor Augustus was the first, greatest, and longest-serving emperor in Roman history. His reign was so long, that an entire generation of Romans never knew anything else when he died.

Because he was the first emperor, there had never been a transition of power. For decades, Augustus had tried to set up his nephews and grandchildren to assume the throne, but there was one problem. They all died.

He ended up appointing his stepson, and the son of his wife Liva as his successor: Tiberius.

Tiberius was a very capable military leader. He spent most of his life in the field with military units. However, Augustus didn’t seem particularly fond of Tiberius, and Tiberius really wasn’t enthusiastic about accepting the job.

Nonetheless, when Augustus died, the Senate and everyone else quickly fell behind Tiberius as the new emperor.

This story isn’t about Tiberius, however. This is about the man he appointed to the position of Praetorian prefect, the head of the praetorian guard: Sejanus.

The praetorian guard was created by Augustus in the year 27 BC. Their primary function was to serve as the personal bodyguards for the emperor and the imperial family. Think of them as the Roman version of the secret service.

Over time the praetorian guard took on more responsibilities and became a vital part of the Roman civil service.

Being the head of the praetorian guard was a big deal.

Sejanus came from an equestrian class family. They were above the common plebeians but below the senatorial class. His father Lucius Seius Strabo, was the head of the praetorian guard before Sejanus.  Fun fact: strabo means crosseyed in Latin.

Tiberius came to power in the year 14, and one of his first acts as emperor was to appoint Sejanus as joint commander of the guard with his father, and then the next year, Sejanus became sole commander when his father was appointed as the governor of Egypt.

Sejanus consolidated his power with the praetorian guard to ensure that he was the sole person in charge, as well as increasing the size of the guard from 9,000 to 12,000 soldiers.

He became a trusted confidant of Tiberius and his chief advisor. Eventually, he eventually became the de facto number two person in Rome. Tiberius called him his Socius Laborum, or his partner in his toils.

Soon after his appointment in the year 15, Sejanus was sent with Tiberius’s son Drusus to quell an uprising. The two began sparring with each other, which might have had something to do with power. Sejanus was clearly the number two guy, but Drusus was the heir apparent.

The conflict between the two grew over the years until it literally came to blows when Drusus punched Sejanus in the face.

Drusus was an impediment to Sejanus’s ambition. If Drusus became emperor, then Sejanus would be on the outs and most probably he would be killed.

Sejanus seduced Drusus’s wife Livilla and the two hatched a plot to murder Drusus.  Drusus died in the year 23, having widely thought to have been poisoned under the orders of Sejanus.

Statues of Sejanus began appearing all over Rome, and Tiberius began retreating from public life.

In the year 26, Tiberius retreated to the island of Capri, which is just south of Naples, where he had built and huge pleasure palace.

With Tiberius out of Rome, Sejanus was in control of the city. As he controlled the praetorian guards which guarded Tiberius, he had total control of all the information which Tiberius received in Capri.

Sejanus began staging treason trials to get rid of his political opponents in the Senate. He began confiscating the fortunes of his enemies as well, much of which was transferred to him personally.

To integrate himself further into the imperial family, he asked Tiberius for permission to marry Drusus’s widow Livilla, which Tiberius denied.

Tiberius’s other adopted son, Germanicus, who also died under suspicious circumstances, had children who were now in the line of succession. Two of his three sons were arrested and starved to death, leaving only his son known as Calligula.

For five years, Tiberius was in Capri and never once returned to Rome. He had no clue what was going on back in the capital. Everything he knew was fed to him by Sejanus.

By the year 31, Sejanus was treated as the emperor in Rome. His birthday was a holiday, his statues were decorated, senators courted his favor, and he was finally betrothed to Livilla.

With Tiberius off on an island, he considered him ruler of Rome and no one dared challenge him.

Sejanus was so great a person by reason both of his excessive haughtiness and of his vast power, that, to put it briefly, he himself seemed to be the emperor and Tiberius a kind of island potentate, inasmuch as the latter spent his time on the island of Capreae.

It was at this point, at the height of his power, something happened to the relationship between Tiberius and Sejanus. Somehow, someone got to Tiberius and told him what had been happening in Rome. They also implicated Sejanus in the death of his son Drusus as well as possibly his adopted son Germanicus.

What followed is the entire reason for doing this episode.

In the year 31, Sejanus was summoned to the senate where a proclamation from Tiberius would be read. He was told it would be granting him tribunate powers, basically making his person sacrosanct, and he would also be named as Tiberius’s heir.

He arrived at the senate full of confidence at the increase in power he would be granted, with all the senate in attendance.

What was read to the senate wasn’t a promotion for Sejanus. It was a list of his crimes and an order for his execution.

If I could go back in history and take a video of one thing, it might just be the face of Sejanus when his death warrant was read.

I can’t think of anyone else in history who had such a dramatic fall so quickly, in just a matter of seconds. Other leaders who have fallen from power usually do so over a period of weeks or months. Even a successful military coup usually plays out over a period of hours.

This was Joe Pesci getting whacked in Goodfellas when he thinks he’s going to become a made man….but at an imperial level in a very public forum.

There is an excellent scene from the 1968 British series “The Cesars” which depicts the denunciation of Sejanus. The camera zooms in on the face of Sejanus and all the senators move away from him in unison. I highly recommend watching it on YouTube if you can.

As it turned out, a LOT of people hated Sejanus. All of the treason trials, and the confiscations of fortunes, by someone who the senators thought was from a lower class, had built up resentment.

Now was the time for payback.

Within a few hours, Sejanus was dead. He was strangled to death and his body was thrown down the Gemonian stairs. The crowd at the bottom literally tore his body to pieces.

This wasn’t even close to the end of the retribution.

The Senate passed a resolution of damnatio memoriae on Sejanus. If you remember back to my previous episode on the topic, it removed any mention of Sejanus. Every statue was to be destroyed, and any mention of him was to be erased.

His entire family was sentenced to death. His son and young daughter were killed, so he would have no descendants. His wife killed herself.

Riots broke out in Rome and anyone who was associated with Sejanus was targeted.

Tiberius then conducted his own treason trials, targeting those who weren’t targeted in the riots. These were widespread as for years, everyone sucked up to Sejanus.

Livilla was implicated in the death of her husband Drusus, and she was starved to death by her own mother to protect the rest of the family.

The entire Sejanus affair tainted the reputation of Tiberius. He can be found on both the list of best and worst emperors in Roman history.

With Sejanus having eliminated most of the legitimate possible successors to Tiberius, the imperial throne ended up passing to Caligula, who has gone done in history as one of the worst, and most insane, emperors in history.

The biggest legacy of Sejanus was probably with the praetorian guard. This was the first time they inserted themselves into imperial politics, but it certainly wasn’t going to be the last. Centuries later, they were the ones who chose emperors and it eventually got to a point where they literally auctioned off the throne to raise money for themselves.

Sejanus probably goes down as one of the most important non-emperors in the history of the Roman Empire.