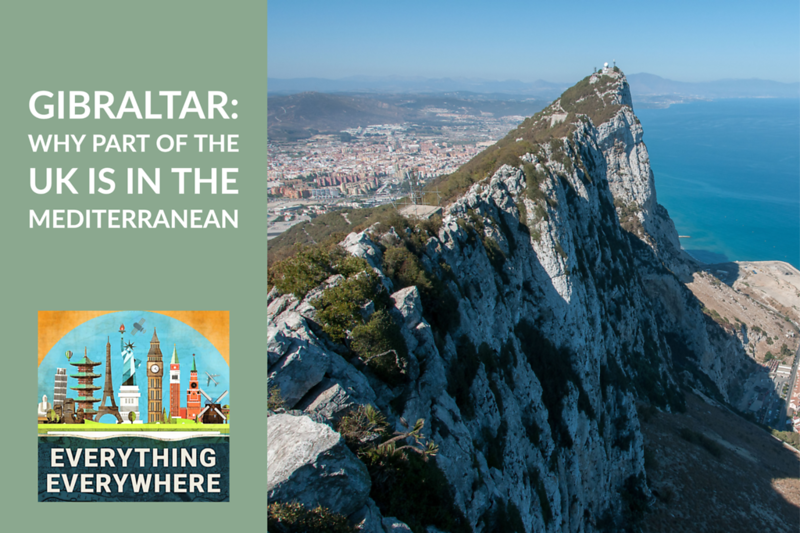 Located on a peninsula off of Southern Spain, best known for the massive rock which dominates its landscape, Gibraltar is one of the most strategic locations in the world.

It has been fought over for millennia, been the focus of many sieges, and is still the subject of diplomatic disputes in the 21st Century.

It also has the only population of wild monkeys in Europe.

Learn more about Gibraltar, the only part of the United Kingdom in continental Europe, on this episode of Everything Everywhere Daily.

My audiobook recommendation today is Gibraltar: The Greatest Siege in British History by Lesley and Roy Adkins.

For more than three and a half years, from 1779 to 1783, the tiny territory of Gibraltar was besieged and blockaded, on land and at sea, by the overwhelming forces of Spain and France. It became the longest siege in British history, and the obsession with saving Gibraltar was blamed for the loss of the American colonies in the War of Independence.

Located between the Mediterranean and Atlantic, on the very edge of Europe, Gibraltar was a place of varied nationalities, languages, religions, and social classes. During the siege, thousands of soldiers, civilians, and their families withstood terrifying bombardments, starvation, and disease.

This is military and social history at its best, a story of soldiers, sailors, and civilians, with royalty and rank and file, workmen and engineers, priests, prisoners of war, spies, and surgeons all caught up in a struggle for a fortress located on little more than two square miles of awe-inspiring rock.

Gibraltar has the distinction of being one of the most strategic places on Earth. Located near the Southernmost tip of the Iberian Peninsula, it is situated near the eponymous Strait of Gibraltar, which is the narrow entrance that separates the Mediterranean Sea and the Atlantic Ocean.

The current territory of Gibraltar is only 6.8 km2 or 2.6 mi2, making it one of the smallest territories in the world, and only slightly larger than Monaco.

The distance between Europe and Africa at this point is only 13 kilometers or 8.1 miles.

The history of Gibraltar actually goes way back to before recorded history.

There is evidence of Neanderthals who lived in caves in Gibraltar 50,000 years ago. It was one of the last places where Neanderthals lived as they were pushed west into the Iberian Peninsula until they reached the sea and went extinct.

The archeological evidence shows that as soon as the Neanderthals died out, humans took over settling the area.

The ancient civilization which inhabited the Mediterranean were very familiar with Gibraltar. It was considered a sacred site by the Phonecians, and the ancient Greeks and Romans called the straight of Gibraltar the Pillars of Hercules.

The site wasn’t of strategic importance to ancient civilizations because they almost never sailed out into the Atlantic. For them, it was effectively the end of the world. The site was important insofar as it was known and revered, but holding the strait wouldn’t give anyone a strategic advantage.

The Strait of Gibraltar began to grow in importance in the middle ages with the spread of Islam. Its importance came not from being the entrance to the Mediterranean, but rather because it was the closest point between African and Europe.

When Islam began to spread, this was the point where the Moorish Invasion of the Iberian peninsula was launched and it sustained the 700-year occupation of Spain.

The name Gibraltar comes from the Arabic term “Jabal ??riq”, which means “the Mountain of Tariq” which refers to the Muslim general Tariq ibn Ziyad.

The Caliphate was the first group that saw the strategic importance of Gibraltar and built the first military fortification in the location.

In 1462, Gibraltar was taken by the Spanish as part of the Reconquista.

This also coincided with the beginning of the Age of Exploration, and Europeans began sailing out into the Atlantic Ocean, both sailing to the Americans as well as sailing around Africa.

This completely changed the importance of Gibraltar. Now it wasn’t the easiest way to go from Africa to Europe, now it became the choke point for controlling the Mediterranean and the rest of the world.

In particular, Gibraltar had large rock which could serve as a fortification, and there was also a large harbor immediately to the wast known as the Bay of Gibraltar.

Its importance can be seen in the fact that since 1309, Gibraltar has been besieged a total of 14 times.

The modern history of Gibraltar dates back to the early 18th century and the War of Spanish Succession.

King Charles II of Spain died without leaving an heir. This resulted in a continent-wide conflict as to who should be the King of Spain.

The English and the Dutch sided with the Holy Roman Empire, which opposed the French.

In 1704, the British sailed down and captured Gibraltar with very little resistance. Most of the residents fled and moved to nearby towns.

When the war was ended with the Treaty of Utrecht in 1713, the English were ceded Gibraltar as part of the deal to get them to exit the war.

Almost immediately, the Spanish wanted Gibraltar back, and they have been working to get it back for over 300 years.

The first Spanish siege of Gibraltar began immediately after it was taken by the English. That lasted from September 1704 to March 1705. The Spanish and French outnumbered the English 4-to-1, but couldn’t take the rock.

The next siege was in 1727 and lasted four months. Here the Spanish had 17,500 troops versus England’s 5,500. Again, the English managed to hold Gibraltar.

The siege was actually part of the American War of Independence believe it or not. The Spanish joined with the French in support of the Americans. As the British were busy trying to crush a rebellion and had their attention elsewhere, they figured it was a good opportunity to try to take back Gibraltar.

The biggest day of the siege was on September 18th, 1782, when France and Spain led an all-out attack on the fortress with over 60,000 men and failed spectacularly.

The results of the siege played a part in Britain’s negotiation of the Peace of Paris with the United States.

It was also the longest siege in British military history.

After 1783, the Spanish gave up trying to retake Gibraltar via military means, but they have never given up trying to get it back.

The 19th century saw the British using Gibraltar as a fortified base which allowed them to expand their influence into the Mediterranean. They ended up controlling Malta and Cyprus during this period as well as digging the Suez Canal.  They literally were able to exert control over both entrances in or out of the Mediterranean.

Gibraltar proved to be especially useful to the British in World War II. Pilots shot down over Europe would try to make their way to Spain. Once in Spain, they could then get to Gibraltar and get home. Gibraltar was also vital for supporting the Siege of Malta, as well as the invasions of Sicily.

The Nazis wanted to take Gibraltar, but Spain’s dictator, Fancisco Franco, who was otherwise sympathetic to the Germans, refused to allow them to enter Spanish territory. The unexecuted German plan was called operation Felix. Had the Spanish supported Operation Felix, it might have radically change the war, and Spanish history.

After the war, Franco continued to press Spanish claims to the Rock often making it difficult for people and goods to cross the border.

This came to a head in 1967 when the people of Gibraltar voted in a referendum about whether they wished to remain under British control or be under Spanish control. They voted to remain British by an overwhelming 99.64% of the vote. 12,138 voted for staying with only 44 against.

In 1969, Franco then completely shut down the border banning any movement in people or goods. The only way in or out was by sea or air.

In 2002, the British held talks with Spain about a joint control over Gibraltar. However, when this was put to a referendum, again 99% of the people living in Gibraltar rejected the idea.

Today, Gibraltar has a population of about 34,000 people. It no longer has quite the strategic importance it did a century ago. Today the economy is mostly centered around banking, tourism, and internet gambling.

One of the unique quirks about Gibraltar is that it is home to the only wild monkeys in Europe. There are about 300 Barbary macaques that live in Gibraltar and the legend has it that when the macaques are gone, the British will leave Gibraltar. During World War II, Churchill imported some just to make sure their numbers were up. They originally came from Morocco.

In addition to the Rock of Gibraltar, there is a narrow strip of land that connects it to Spain. That is the only place where you put a runway, so everyone that enters Gibraltar by land has to cross over the airport runway.

When I visited Gibraltar, I had to wait for a plane to land before I was allowed to cross. It is one of the few places in the world where you can walk on a commercial airport runway.

Another quirk is that the country directly south of Gibraltar across the strait is…..Spain. If you remember back to my episode on Spanish Africa, the land directly across from Gibraltar is actually the Spanish city of Ceuta which is actually in Africa.

English is the official language of Gibraltar, however, almost everyone knows Spanish as well. The working language of most people is called Llanito. It is mostly Andalusian Spanish, but with a whole bunch of English thrown as well as words from other languages.

Gibraltar is an interesting place. If you are ever in Andalusia, it’s worth it to take a trip there. It is a small enough place where you can see almost everything in a day. Likewise, there are cheap discount flights from London, and there are some cruise ships that stop there as well.

The future of Gibraltar is still up in the air. Its status after Britain left the European Union is in question. While the citizens of Gibraltar have overwhelmingly rejected the idea of joining Spain, other ideas which have been floated include complete independence as well as formally joining the UK and electing members to parliament.

Regardless of what the future holds for Gibraltar, it will always be a unique place in Europe with a history unlike anywhere else.