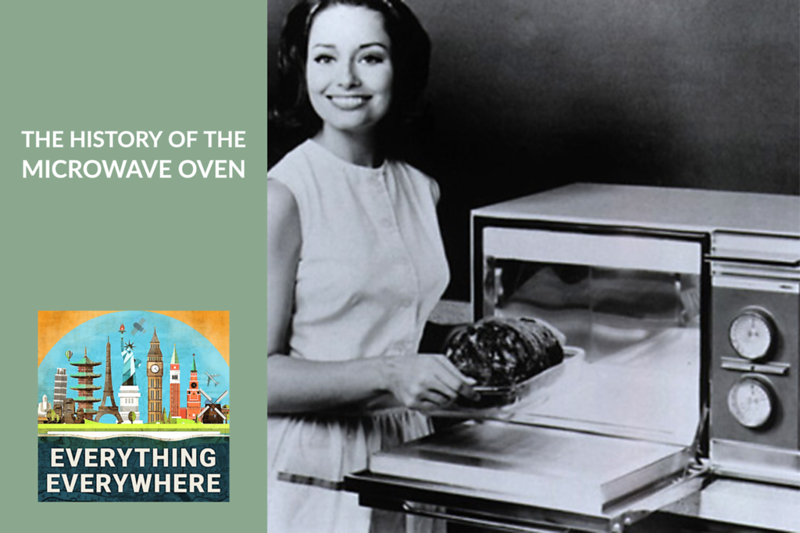 According to legend, in 1945 an engineer by the name of Perry Spencer was working in front of an active radar installation. As he was working, he noted that a candy bar that he had in his shirt pocket started to melt.

His investigation into the phenomenon resulted in a new technology that has radically change how we cook and live.

Learn more about microwaves, how they were invented, and how they work, on this episode of Everything Everywhere Daily.

This episode is sponsored by Expedia’s Out Travel the System Podcast.

I know you love to hear the story behind the story – so let me tell you why I think you might want to listen to the Expedia podcast Out Travel the System.

This season alone, the show talks to someone on a mission to visit every country in the world (in case you were wondering, the tally stands at 194 out of 197 countries). There’s the man who has visited and stayed at literally thousands of hotels, who shares some of his favorite unique accommodations and experiences.

Or how about the woman who has reached some deep philosophical conclusions about travel and privilege, in no small part because of the pandemic?

Get all of this and more when you tune into the show, including larger insights about the future of travel, as well as tips and tricks to maximize your savings for your next trip – whenever you feel ready to head into the world again. You can find Out Travel the System on your podcast platform of choice.

The development of the microwave goes back to the early days of radio.

Experimenters learned that if you used the proper frequency and enough power, the radio waves can make your hand warm.

The best know polar molecule is water. If you think of a water molecule as looking like mickey mouses head, the ears which have the hydrogen atoms have a slight positive charge, and the bottom of the face which is the oxygen atom has a slight negative charge.

This effect, after it was first discovered, was used for some quack medicine known as diathermy. They used microwaves to heat people’s bodies as if that would do something.

Once dielectric heating was known, the next step towards using it to cook food was soon followed. At the 1933 Word’s Fair in Chicago, the Westinghouse company demonstrated cooking steaks and potatoes between two metal plates that were connected to a shortwave transmitter.

In 1937, Bell Labs, which if you remember from a previous episode invented everything, received a patent for dielectric heating.

Beyond novelty uses of cooking a steak between two pieces of metal, not much was done with the concept of dielectric heating until 1945.

That was when the previously mentioned Percy Spencer melted the candy bar in his pocket. While he didn’t discover dielectric heating, he did something that no one else bothered to seriously do before. He wondered if this could be turned into a product.

Spencer was an employee of the Raytheon Corporation and was working on a radar installation and was standing in front of a magnetron. A magnetron is the thing inside every microwave today and is at the heart of a radar system. It converts electricity to electromagnetic radio waves.

He immediately sent an assistant out to get some popcorn, and he tried to make it pop placing it in front of the magnetron….and it worked! Popcorn went flying all over the place.

Next, he then tried to cook an egg. He put a raw egg in a teapot and placed the magnetron directly overhead. One of his associates looked into the teapot at the exact moment the egg exploded, and he got a face full of egg. The egg exploded because the inside was cooking, and it built up too much pressure.

This was the first microwave oven.

..and by the way, for all his efforts for creating one of the most popular cooking appliances in the world, Percy Spencer received a whopping $2 from Raytheon.

It only took two years from Percy Spencer’s cooking popcorn in front of a radar, to the release of the first commercial microwave oven.

It consumed three kilowatts of electricity, and it had to be water-cooled because it got so hot.

The initial market for these huge microwave devices was restaurants and, believe it or not, airplanes. The idea behind using it on an airplane is that it eliminated the heating unit which a regular oven would have been a safety concern, and it could quickly reheat meals for passengers. However, the huge size and weight of the device probably overwhelmed any benefits.

One of the earliest surviving commercial microwaves sits on the NS Savannah, which was the world’s first nuclear-powered merchant ship. Today it is a museum ship in Baltimore harbor, but you can still see the original Raytheon Radarrange in the galley.

As with most technology, microwaves got smaller and cheaper. In 1955, Raytheon licensed its technology to the Tappan Corporation which made kitchen appliances. It introduced the Tappan RL-1 which was the size of a regular oven, and it cost $1,295, or about $11,000 today.

Other companies such as Sharp in Japan, and Littton also produced microwaves in the 60s, but they were still big and expensive, and not something you would find in a home.

That change in 1967. Raytheon purchased the Amana which was a manufacturer of residential refrigerators and released the Amana Raydarrange. It only cost $495 and it could fit on a countertop. It was the first microwave which was small enough and cheap enough for the home.

In addition to the countertop microwaves, in the late 60s and early 70s, there were many models which were integrated into a normal convection oven. You almost never see these sorts of ovens anymore, but they actually make a lot of sense. It is the best of both worlds. You can get the speed of cooking with a microwave, yet you can still bake and broil things to get a crust that you can’t do with a microwave.

By 1975, there were a million microwaves sold annually in the United States.

Today, 90% of American homes have a microwave.

Microwave sales have actually gone down in recent years. They hit their peak in 2004. While they are fast and convenient, there has been a movement back towards slower food cooking for yourself. You will never be able to properly cook a steak or bake bread in a microwave.

Since microwaves have become a common household item, there are several beliefs about microwaves that have floated around. Some of them are true and some are not.

For starters, what is the deal with putting metal in a microwave?

If you have ever put a piece of metal in a microwave, either on purpose or by accident, you probably have noticed that sparks will begin shooting out.

What is happening is that electric fields at the corners of metallic objects become concentrated, which is why you see sparks. Much of this has to do with the shape of the object. It is actually safer to put a spoon in a microwave than a fork for this reason.

Technically you can put metals in a microwave and some products actually do this. A microwavable soup container will have a thin metal layer that is used to heat the soup. However, you can’t leave it in longer than the recommended time, or you will have problems.

Nonetheless, not putting metal in a microwave is still a very good rule to follow.

For starters, the radiation inside a microwave is non-ionizing radiation. It won’t break apart molecules. X-rays and gamma rays are ionizing radiation and are dangerous. Microwaves are between radio and infrared light on the electromagnetic spectrum.

Also, microwave ovens are basically a Faraday cage. The microwaves inside bounce around and can’t get out. The next time you look through the window of a microwave, you’ll notice that there is actually a wire mesh you are looking through. Modern microwaves basically let out none of the electromagnetic waves. You can tape a candy bar to the window and it will not melt.

Why do microwaves heat food unevenly?

This is due to the electromagnetic waves inside the microwave canceling each other out. There are some great experiments online where people put a tray of shredded cheese in a microwave and heat it. When they take it out, some parts are melted and some are not. The distance between the melted parts is the same as the wavelength of the microwaves. You can actually use your microwave to calculate the speed of light.

Do microwaves destroy the nutrients in food?

No, they do not, and actually, they preserve nutrients better than most conventional cooking does. This is because cooking times are shorter, and you aren’t leeching away nutrients in water if you are boiling.

The only thing you don’t really want to do with a microwave is to take it apart and monkey with the electronics. The magnetron inside a microwave requires very high voltages, and the capacitors inside them can give you a very nasty shock, even if it is unplugged.

So, whether you are heating up a cup of coffee at the office, a cup of ramen in your dorm room, or a TV dinner at home, take a moment to thank Perry Spencer whose curiosity took us from a melted candy bar to a ubiquitous household appliance.