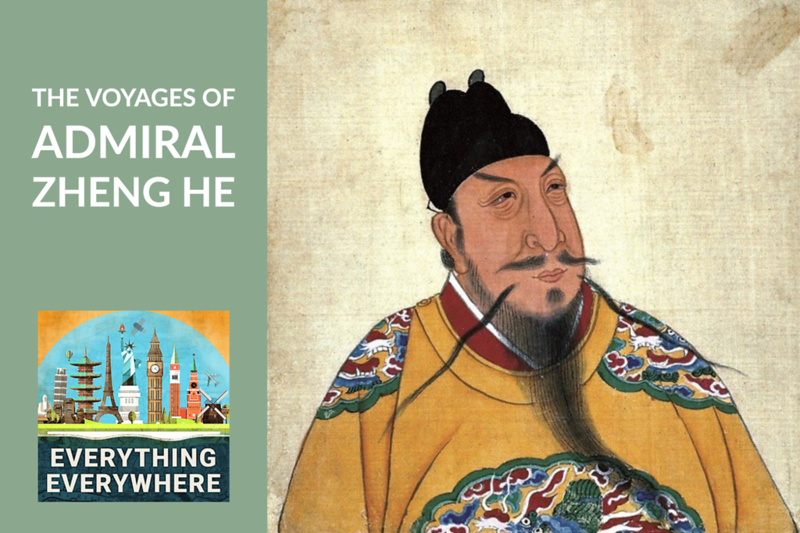 In the early 15th century, just before Europe began its Age of Exploration, China was embarking on a series of voyages that put to shame anything anyone in Europe would do for centuries.

These voyages were led by a man who was the greatest admiral in history up to that point and the ships in his fleet were the largest wooden ships that the world would ever see.

Learn more about the voyages of Admiral Zheng He on this episode of Everything Everywhere Daily.

If you’ve been listening to the show long enough, there are a couple of themes that keep repeating. One of them is that many of the things in our world actually have rather ancient roots. The other is that the Chinese probably did it first.

There were many inventions and innovations which were first developed in China before they were developed in the west, or slowly made it to the west via the Silk Road.

A case in point is Chinese shipbuilding.

When Columbus sailed to the new world in 1492, he had a fleet of three ships. Each of the ships was between 50 to 70 feet long.

The Chinese during the Ming Dynasty were building ships that may have been up to 450 feet long.

Moreover, they were building lots of them and sailing them across oceans almost 100 years before Europeans were crossing the Atlantic, or sailing around Africa.

The man who was most responsible for these achievements was Zheng He.

He was born in 1371 with the name Ma He in China’s southern Yunnan Province. He was born and raised as a Muslim which came from his great-great-great-grandfather who was the governor of the province during the Mongol Empire.

In 1381, the armies of the Ming invaded Yunnan to reconquer it and expel the Mongols. It was during this invasion that 10-year-old Ma was captured by the Ming army.

At some point over the next four years, he was castrated, became a eunuch, and was put in the service of the Prince of Yan, Zhu Di.

While in the service of Zhu Di, he became a close confidant. He moved with him to Beijing where he was involved in leading troops fighting the Mongols.

He was given an education, which was normally not done for eunuchs.

When a civil war broke out between Zhu Di and his nephew the emperor, Ma He served as a general and helped lead forces to capture the Chinese capital of Nanjing.

In 1402, Ma He’s master, the man to whom he was a top advisor, was now the Emperor of China, the third Emperor of the Ming Dynasty, known to history as the Yongle Emperor.

The Emperor bestowed the name Zheng to him because of his efforts in defending the Beijing water reservoir of Zhenglunba in 1399.

Here I should note the pronunciation of Zheng He. If you read the title of this episode you might pronounce it “zeng hee”. I’m trying to stay true to the Chinese pronunciation as much as I can.

The new emperor inherited a rather large fleet of ships, however, he wanted to expand their fleet and use it to project Chinese power and influence beyond its borders.

The emperor assigned Zheng He the task of overseeing the project.

Zheng He began construction on the fleet in a shipyard in Nanjing, which sits on the Yangtze River, just upriver from the modern city of Shanghai.

The fleet consisted of warships, merchant vessels, supports ships, and of course the giant treasure ships. The treasure ships were awe-inspiring and still would be today if one were to sail into a modern port.

Creating that sense of awe was part of the mission. The Chinese wanted to impress the locals in every port they arrived at.

A total of 28,000 sailors, merchants, and soldiers took part in the expedition.

The route they took was similar to what Chinese merchants had been traveling for centuries.

They traveled south to southeast Asia stopping in the modern-day countries of Vietnam, Indonesia, Brunei, Malaysia, Sri Lanka, and India.

Along the way, they stopped in various ports of local kingdoms, engaged in trade, and also took with them, envoys from the local kings.

When they returned to China in 1407, they fought a brief battle with a Chinese pirate and delivered the envoys to the imperial court. There, they delivered their gifts to the Ming Emperor and were given gifts for their rulers in return.

Their stay in China was short as the Emperor ordered a second voyage to set sail that year.

This time they followed roughly the same route, taking the envoys back to their home cities along with gifts from the Chinese Emperor. They resolved a standing diplomatic issue between Java and China.

In all, over a period of 20 years, there were six voyages of the Ming Treasure Fleet, all of which were commanded by Zheng He.

The fleet strengthened China’s ties with states all over Southeast Asia and along the Indian Ocean. It dramatically increased trade with these regions and brought back to China a plethora of goods. They also established China as the hegemonic power in Asia, by having other Asian states recognize and pay tribute to the Chinese Emperor.

China often used this power to stop local wars to stabilize the region. They were able to do this because of their overwhelming naval supremacy.

The fleet managed to sail as far as the east coast of Africa, visiting Ethiopia, the Horn of Africa, and they possibly went as far south as Madagascar.

They brought back to the Emperor such exotic animals like ostriches and giraffes.

Back in China, the recognition of foreign powers, tribute gifts, and even a giraffe, all served to strengthen and legitimize the power of the Yongle Emperor. The giraffe was claimed to be a mythical qilin, which is a beast that is said to appear and the coming or passing of a great ruler.

In 1421, the Emperor put a temporary halt to the Treasure Fleet voyages. He was busy fighting the Mongols again, and the fleet was stationed at Nanjing to protect the city.

In 1424, Zheng He was sent on a diplomatic mission to the city of Palembang on the island of Sumatra. When he arrived back in Nanjing, he found that the emperor had died.

The new emperor, called the Hongxi Emperor, was against the Treasure Feet and canceled future voyages. However, he was only emperor for one year.

The next emperor, the Xuande Emperor, approved the seventh voyage in 1433, 12 years since the sixth voyage left China. They brought back with them 11 envoys from places as far away as Mecca.

After that, the voyages just stopped. No one is quite sure why. Contemporary records about the voyages were favorable, and by every indication, they were a net positive for China, and they seemed to have made money.

All future emperors followed suit, and the Chinese never again had the same naval dominance they did under the Zheng He.

Historians have raised doubts about the Treasure Fleet over the years. Given the amount of documentation about the fleet in China and in the places they visited, there is no doubt that it existed. However, they have yet to find hard evidence for the giant treasure ships.

They think they have found the shipyard where they might have been built and a rudder that would be an appropriate size for such a large ship.

One author even contends that the Treasure Fleet might have made it to the coast of the Americas, however, there is very little evidence to support this. While Chinese ships could certainly have made the voyage, there is no documentation or hard evidence that this is the case.

The voyages of Zheng He marked the high water mark for Imperial China internationally. After the Treasure Fleet, the country slowly began to turn inward, becoming more isolationist and focusing on internal matters. The capital moved from Nanjing to landlocked Beijing, which also took attention away from seafaring.

Zheng He to this day remains one of the greatest sailors and explorers not just in Chinese history, but in world history.