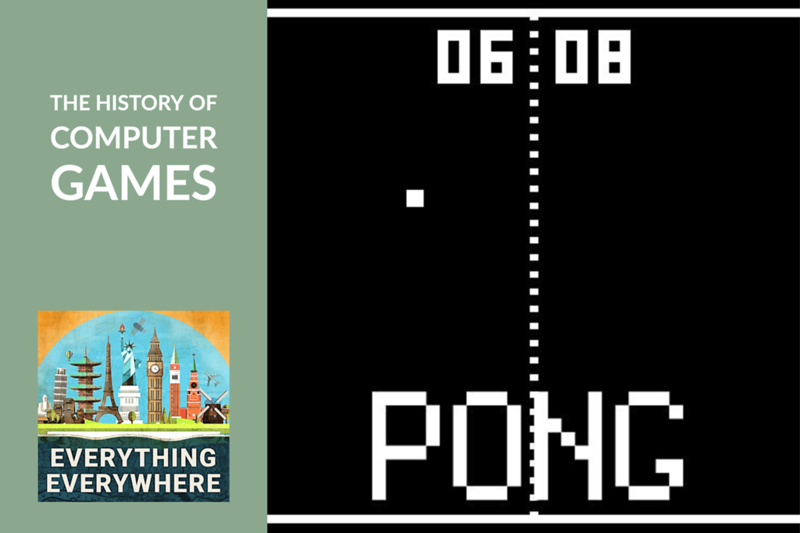 Video games have become ubiquitous in today’s world. Most of us probably have some sort of computer game on our smartphone, as well as games on our desktop computer, and you might even have one or more dedicated computing devices dedicated solely to playing games hooked up to your TV.

Learn more about the history of computer games and how it has closely followed the computer industry itself, on this episode of Everything Everywhere Daily.

I ended up going with computer games for one simple reason: The first computer-based games were created before there was a video component.

In fact, one of the surprising things I discovered in the process of researching this episode was just how quickly programmers began creating games, even in the earliest days of electronic computing.

The very first computers were created before the integrated circuit was developed, and even before the transistor. They were huge vacuum tube behemoths that took up entire buildings and used an incredible amount of electricity.

It was built by Josef Kates for the 1950  Canadian National Exhibition. The display was a three-by-three grid of lights, the computer would play against people, and it had different difficulty settings.

After the two-week event, the computer was disassembled. The purpose of the game was to demonstrate a new type of vacuum tube.

In 1951, the Ferranti corporation in the United Kingdom created Nimrod, which was a specially designed computer to play the game Nim. Nim is a very simple, ancient game where you can pick up objects from different piles.

It too was built for a festival, the Festival of Britain. The interface was just a bank of lights that would turn on and off.

There were several of these very simple games which were created in the 1950s, but they all shared something in common. They had a custom-built interface, they played a very simple game, and they couldn’t be played anywhere other than on that computer.

Moreover, computer time back then was incredibly expensive. There were only a handful of computers in the entire world, and they had more important things to do other than play games.

The next big breakthrough occurred in 1958 with the creation of the game Tennis for Two by William Higinbotham at the Brookhaven National Laboratory.

Tennis for Two was innovative in two very important ways. First, the display was on an oscilloscope, which had a cathode ray tube, the same as used to be used on a television set.

The game consisted of a straight horizontal line on the bottom which was the tennis court, and a vertical line in the middle which was the net. You just hit pixels over the line just you would in tennis.

This could be considered the first real video game, as it was on a sort of video monitor.

The other big advancement was that used custom-built controllers which were created by Higinbotham and a technician Robert Dvorak.

The game was only around for three days, again as a demonstration, before it was disassembled. Higinbotham actually testified at a patent trial in the 1970s to show that there was prior art for the game.

Tennis for Two was crude and simple, but most people would recognize it as a video game. There was a screen, there were controllers, and you played against another person.

However, it was still tied to a single computer.

The next big advance occurred in 1962 with the creation of Spacewar! which was created by computer scientist Steve Russell at MIT. The game was designed for the Digital Equipment Corporation PDP-1 minicomputer.

The PDP-1 was a general-purpose computer that cost under $25,000. Unlike many of the previous computers, this was a computer that could be found in many different locations around the world.

Spacewar! was the first video game that was designed to run as software on any PDP-1. It wasn’t hardwired to a single device.

The game was a dogfight game between two spaceships, which were really just cursors, which orbited around a star with gravity. There was ammunition and fuel for the spaceships.

What made this different was that the game was passed around to different institutions with PDP-1 installations and other programmers contributed to developing the game. Today we would call it open source, but back then, no one really thought to think of computer code as property. The machines were the expensive part, not the software.

The game was extremely popular amongst the small community that used computers at the time. It was easily the most played computer game in history up until that point, just because it was played in more than one location, and it wasn’t created just as a hardware demonstration.

Other computer games were designed for mainframes in the 1960s, but there were still server limitations with the cost of computers and programming.

However, things were changing rapidly. Computers were getting cheaper, more powerful, computer programing languages were being developed, as well as the first UNIX operating systems.

In the 1970s, minicomputers gave way to microcomputers. Computer enthusiasts could buy parts and build their own computers at home. These computers also used standard television sets as a display.

Many of these early home computer games were text-based adventure games like Star Trek, Hunt the Wompass, and Colossal Cave Adventure.

In 1971, the first computer arcade game was released. It was called Computer Space and it was based on the 1962 game Spacewar!. It was the first commercial video game of any type.

1972 saw the release of the first dedicated video game console which could be played on a television set: The Magnavox Odyssey. The Odyssey sold for $99.95 in 1972 dollars and came with 2 controllers and a light gun.

The creator of the Magnavox Odyssey was Ralph Baer, who is considered the father of the video game industry. Before the Odyssey there were games, but this was the first device to be sold to consumers as a game with the intent of making a business off of it.

1972 also saw the creation of the Atari corporation by one of the developers of Computer Space, Nolan Bushnell. They released Atari’s first cabinet arcade game, Pong, which was the first really popular arcade game. Pong was a descendent of the original Tennis for Two from 1958.

Pong was the first computer game I remember playing in the 1970s. My dad purchased a Radio Shack knock off which hooked up to the TV set and it played four different games you selected by turning a knob, and it costs $29.99.

1977 and 1978 saw a real explosion of video games into popular culture.

In 1977 Atari released the Atari 2600 console, which was the first and really only console that I’ve ever owned. The 2600 wasn’t the first device to sell games separately as read only memory or ROM cartridges, but it did popularize the practice of selling games separately.

1978 saw the release of Space Invaders, which quickly became the most popular arcade video game in the world.

In 1980, Atari got the license to release Space Invaders for the 2600, and sales quadrupled within a single year.

The early 80s saw an explosion in arcade culture. That was where I went as a kid to hang out. Computer games had found a spot in the center of popular culture as evidenced by the 1982 movie Tron.

Around this time you also saw the sale of mass-market home computers. Machines like the Apple II, and Commodore 64.

One of my friends had a Commodore Vic 20 and I can still remember buying video game magazines where they would have all the code for the game published in the magazine. We would have to type the code into the computer exactly as it was shown, and if we screwed up a single character, the game wouldn’t work.

The other big advance in gaming in the 1980s was the first networked games. Dial-up bulletin boards were increasingly popular, and while incredibly slow, they did work well enough for text-based adventure games.

The late 80s also saw a shift in the video game industry from the United States to Japan. Companies like Nintendo and Sega, which popularized 16-bit computer consoles in the late 80s and early 90s, became the dominant players in the industry.

Obviously, the video game industry kept getting bigger into the 90s and beyond, and most of you were probably around for most of it. Consoles kept getting better, the internet radically changed how we play games with each other, and smartphones allowed people to spend ridiculous amounts of money on games like Farmville.

However, there is one last game that I want to mention, because its legacy is still with us today in a very literal sense: Doom.

Doom was the game that popularized the genre of first-person shooters. Released in 1993, it was originally released as shareware. I remember seeing CD’s of Doom for sale at the checkout register at computer stores.

When it was released, Doom was a cutting-edge game for serious desktop computers.

Since then, however, a small community of people has taken it upon themselves to install the original Doom code on pretty much any and every device you can think of.

It has been installed on digital cameras, industrial equipment, printers with small screens, an oscilloscope, a single key of a programable keyboard, smartwatches, ATM machines, stadium jumbotrons, and even a digital home pregnancy test!  (FYI, the pregnancy test had a 128×32 monochrome display).

Now well into the 21st century, the video game industry just keeps getting bigger and better. Tools like the Unreal Engine are allowing developers to create games that are now almost lifelike.

All of this creativity and technology owes its existence to a 13-foot high Canadian computer that could play tic-tac-toe.