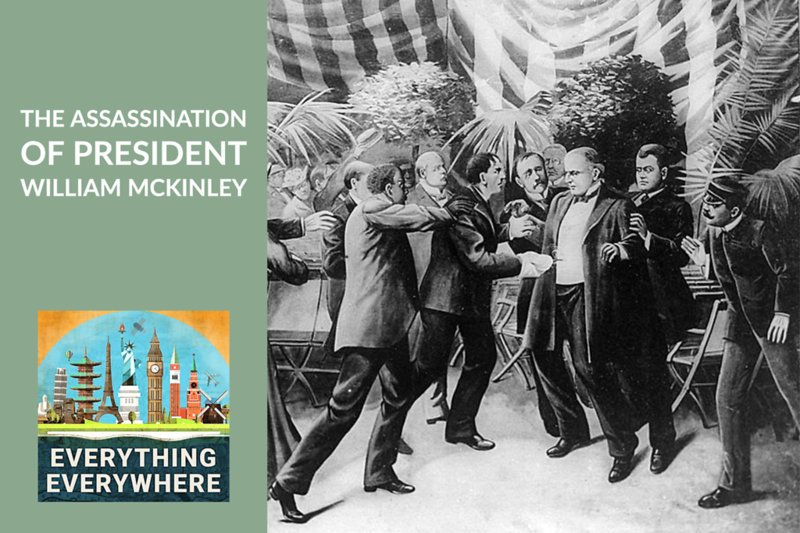 On September 6th, 1901, in Buffalo, New York, the President of the United States, William McKinley was shot twice in the torso.

Seven days later, he passed away due to an infection. For the third time in only 36 years, a US president had been assassinated.

Yet, few people remember this event, or even the president himself.

Learn more about the assassination of President William McKinley on this episode of Everything Everywhere Daily.

My audiobook recommendation today is The President and the Assassin:  McKinley, Terror, and Empire at the Dawn of the American Century by Scott Miller.

In 1901, as America tallied its gains from a period of unprecedented imperial expansion, an assassin’s bullet shattered the nation’s confidence. The shocking murder of President William McKinley threw into stark relief the emerging new world order of what would come to be known as the American Century. The President and the Assassin is the story of the momentous years leading up to that event, and of the very different paths that brought together two of the most compelling figures of the era: President William McKinley and Leon Czolgosz, the anarchist who murdered him.

Scott Miller chronicles how these two men, each pursuing what he considered the right and honorable path, collided in violence at the 1901 Pan-American Exposition in Buffalo, New York.

William McKinley isn’t one of the better-known US Presidents, which is sort of odd.

For, starters, his election in 1896 ushered in an entire reordering of the political system in the United States as I mentioned in my episode on America’s six political eras.

He won two presidential elections, and most presidents who’ve won two terms usually are the ones who stand out in history.

Finally, he was assassinated and the presidents who are killed in office, like Kennedy and Lincoln, tend to deified and remembered.

The McKinley administration ushered in many changes to the United States government. Under McKinley, the US entered into the Spanish-American War, its first foreign war.

They also began an ill-fated attempt at becoming a colonial power gaining territories outside of North America for the first time. Puerto Rico, Guam, Hawaii, American Samoa, and the Philippines all became US territories under the McKinley administration.

While there weren’t any opinion polls at the time, by any measure McKinley was a popular president. He won two presidential elections by comfortable margins and even had to publicly announce that he wasn’t going to seek a third term.

The other player in this story is the assassin, Leon Czolgosz.

Czolgosz was born in Michigan to a Polish family of eight children and grew up in Detroit.

When the Panic of 1893 struck, which absolutely going to be the subject of a future episode, he, along with others at the steel mill, was laid off and then asked to accept lower wages. The company went on strike, which began the political awakening of Leon Czolgosz.

He started by attending meetings of moderate socialists groups, and then gravitated towards more extreme groups, before finally winding up as an anarchist.

Czolgosz was a socially awkward person. He never dated anyone, had few friends, and would, like all good assassins, be described as a loner. He began approaching anarchist leaders around the midwest and began asking very direct questions about their organization in a way that made him seem rather shady. Some groups thought he was a spy.

In July 1901, he attended a speech by noted anarchist leader Emma Goldman and then later went to her house to talk to her.

He became inspired by the assassination of King Umberto I of Italy, who a year earlier was assassinated by an anarchist.

Czolgosz figured that he would do his part for the cause by killing the President of the United States of America.

His plan was pretty straightforward. The President was going to be speaking at the Pan-American Exposition which was being held in Buffalo, New York. That was the place he was going to commit the act.

On August 31, 1901, he arrived in Buffalo and rented a room. On September 2nd, he purchased a .32 caliber Iver Johnson “Safety Automatic” revolver and on September 6th he went to find McKinley.

McKinley was in a receiving line in the Temple of Music, which was the concert hall at the Pan-American Exposition. It was a temporary structure that was only intended to be used for the duration of the fair.

Czolgosz waited in line to meet the president until it was his turn. When he got to the font of the line, the president extended his hand to him. Czolgosz, however, pulled out his gun and fired two shots point-blank at the president.

The wound was not necessarily fatal. If a similar gunshot wound happened today, odds are the victim would live.

The man behind Czolgosz in line was James Parker, a man who was born into slavery in Georgia. Parker punched Czolgosz in the neck and wrestled him to the ground, knocking the gun out of his hand.

Nearby police and soldiers then piled on Czolgosz and began beating him senselessly. It was McKinley himself who ordered them to stop beating Czolgosz. He told them “Go easy on him, boys”.

Parker gave an account of the incident to local newspapers. He said:

I heard the shots. I did what every citizen of this country should have done. I am told that I broke his nose—I wish it had been his neck. I am sorry I did not see him four seconds before. I don’t say that I would have thrown myself before the bullets. But I do say that the life of the head of this country is worth more than that of an ordinary citizen and I should have caught the bullets in my body rather than the President should get them.

The exhibition had its own hospital, and that was where the president was taken. However, there was no doctor on the premises at the time. The lead surgeon was in Niagara Falls and was in the middle of surgery when he was notified.

Eventually, two doctors arrived, but they weren’t necessarily trained to treat abdominal wounds. One was a gynecologist. They decided to go into surgery immediately, as the operating room was lit by natural light, and the sun was setting.

The surgeons couldn’t find the bullet. The president’s stomach had an entry and an exit wound, but they didn’t have the tools to properly work on the president.

There was an experimental x-ray at the exhibition which could have been used to help the doctors find the bullet, but they never thought to use it.

Czolgosz was immediately taken to a local police station where he was held. Crowds gathered outside the police station and when people found out he was an anarchist, there were attacks on other anarchists around the country.

At first, it appeared that the president might survive. The day after, September 7th, he appeared to be doing better.

Vice-President Theodore Roosevelt was in Vermont and rushed to Buffalo to attend to the President. By September 9th, he had left, confident that the president would make a full recovery.

On September 10th, Secretary of State John Hay arrived. Hay had been a personal secretary to Abraham Lincoln and was a personal friend of James Garfield, the two previously assassinated presidents.

McKinley’s improving condition was deceptive, however. Gangrene was spreading in his body, and the infection got worse and worse.

Vice-President Roosevelt was returning to Buffalo. He learned of the news when he arrived at a train station in North Creek, New York and there was a special train waiting for him. When he arrived in Buffalo, the decision was made to take the oath of office immediately.

As for Czolgosz, he was indicted by a grand jury just 2 days after the president’s death.

He was assigned two defense attorneys, but he refused to speak to them as he viewed them as being part of the system he was trying to fight. He did however speak freely and often with his prison guards.

The trial began on September 23, just nine days after McKinley’s death. Czolgosz entered a plea of guilty, but the judge recorded it as not guilty.

The defense had no witnesses, and because Czolgosz refused to cooperate, had really no defense at all.

The case was open and shut as there were multiple witnesses, a murder weapon, and Czolgosz never really challenged the fact that he did it.

The jury found him guilty after only 30 minutes, and that was only because they took time to review the evidence. He was sentenced to death by electric chair.

Czolgosz did not seek an appeal and was resigned to his fate.

He was executed on October 29th, just 45 days after McKinley died.

His last words were:

“I killed the President because he was the enemy of the good people – the good working people. I am not sorry for my crime. I am sorry I could not see my father.”

His body was drenched in sulphuric acid before burial to facilitate the dissolution of his body.

The aftermath of the assassination had several repercussions.

After three presidential assassinations in 36 years, steps were finally taken to improve presidential security. Agents of the Treasury Department, known as the Secret Service, were immediately assigned by congress to provide protection for the president, and that became permanent in 1902.

The anarchist movement became divided on the question of Leon Czolgosz. Some thought the assassination was a good thing, and others thought it hurt the movement more than it helped.

McKinley was buried in Canton, Ohio in one of the largest tombs dedicated to any president of the United States.

James Parker, the man who tackled Czolgosz refused to take any money but did go on a speaking tour after the assassination where he addressed sold-out crowds. He went on to become a salesman for a magazine for Pullman Porters and other African American hotel employees.

The location of the assassination was a temporary structure, so it was eventually torn down. Today, the location is marked by a very small stone in the median of an unassuming residential street.

Today the presidency and the assassination of William McKinley have mostly been forgotten. Nonetheless, at least in 1901, it was the single biggest story in the United States.