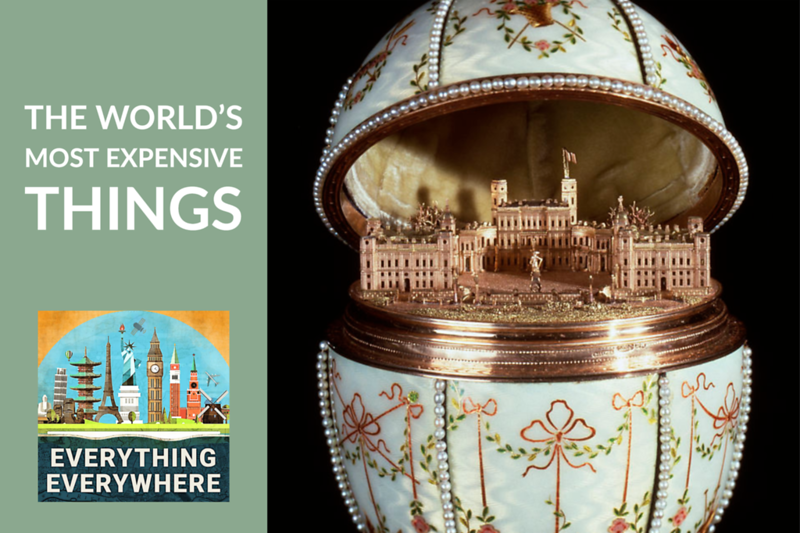 I’m talking about the realm of ultra-expensive items which would be more than most people would make in a lifetime. Items so expensive, that they usually make no financial sense to buy them whatsoever.

Learn more about the world’s most expensive things on this episode of Everything Everywhere Daily.

If you happen to have a couple of billion dollars burning a hole in your pocket, then CuriosityStream might have some shows to help you decide on what to do with it.

They have documentaries on classic cars, as well as on palaces such as Versailles in France, and a show on history’s greatest homes.

They also have shows on great works of art, and fellow billionaires such as the Sultan of Brunei.

To start this discussion of really expensive things, I think it is first necessary to narrow down what I mean by a thing.

I’m not talking about something which can be made more expensive by just amassing more of it. If oil is $50 per barrel, then you just buy 2 billion barrels and spent $100 billion.

I don’t think that is in the spirit of the discussion, so all the tea in China or all the land in Russia doesn’t count as a “thing”.

By the same measure, just encrusting something in jewels or making it out of gold doesn’t really count either. You can just keep adding jewels to make it more expensive and the value of the object would just the sum of the individual parts. Likewise, a solid gold rocket car is really just a big chunk of gold, and not really a good rocket car.

So, with that out of the way, let’s start with a big-ticket item which many people around the world own: a house.

There are many palatial homes around the world that have sold for tens or even hundreds of millions of dollars. These are usually very large estates in areas with very high property prices.

The most expensive home in the world currently on the market that I could find is called “The One” and it is located in Bel Aire, California. It is a 100,000 square foot, or 9,300 square meter, mansion with 20 bedrooms, 30 bathrooms, and five swimming pools.

It currently has an asking price of $500 million dollars.

However, this is not the most expensive residential home which has been built. Not by a long shot.

That distinction goes to India’s richest man, Mukesh Ambani, who built a 400,000 square foot, 27 story residential tower in Mumbai for himself and his family.

The building is called Antilla. It has a 168 car garage, 3 helipads, its own air traffic control center, a 50 person theater, and a snow room, which creates its own snowflakes.

It requires a staff of 600 people to maintain the building, and it is currently valued at $1.2 billion. However, a spokesperson from the architectural firm which designed it said that the total cost of construction may have been as high as $3 billion.

While all private jets cost a lot of money, the most expensive ones aren’t the jets that are marketed as private jets. We aren’t talking bout Gulfstreams or Lear jets.

The largest commercial aircraft in history is the Airbus A380. It can seat up to 853 people.

Not surprisingly, the most expensive private aircraft ever designed was a  customized A380. It was designed but ultimately canceled, by Saudi Prince Alwaleed bin Talal, who is one of the richest people in the world.

The plane was to have a Turkish bath, garage space for cars, and a stable for horses and camels. It would have cost $500 million, but it was canceled for financial reasons.

Russian billionaire Alisher Ashmanov currently owns a customized Airbus A340-300. The plane itself, before the customization, cost $238 million. The total price is estimated to be between $350 million and $500 million.

This, however, is not the most expensive plane in the world. The next version of Air Force One is estimated to cost approximately $4 billion dollars. It will be a customized Boeing 747-8 and the expense come from all the communication and defensive customizations which are required.

OK, so we got a house and a jet, but you are going to laughed out of the billionaire’s club if you don’t have a yacht.

There are many superyachts that sell for hundreds of millions of dollars.

However, there is one yacht that crushes them all in terms of valuation. Russian billionaire Roman Abramovich owns the megayacht Eclipse. At 533 feet long, it is currently the third-longest yacht in the world.

However, it is also the most expensive yacht. Built in 2010, the cost of the yacht is estimated to be between $1.5 and $1.9 billion. The ship has two separate helipads, two swimming pools, and a missile defense system.

While this is the most expensive private ship, there are more expensive ships out there.

The USS Gerald R. Ford is the United States’ newest nuclear aircraft carrier. It is currently undergoing testing, but the total cost of the ship, including all of the design, research, and development, cost over $14 billion.

Billionaires can’t just have mansions, jets, and yachts. You have to decorate it and to do that you need art.

Art prices have been going through the roof over the last several decades. There have been several dozen paintings that have sold for over $100 million.

However, there is one painting that, when it went up for auction, crushed every record for art prices. Leonardo da Vinci’s Salvador Mundi was sold at auction in 2017 for $450 million. It is one of only a very small number of surviving paintings by Leonardo, and one of the very few in private hands.

The buyer of the painting is unknown, but it is believed to be the Saudi Crown Prince Mohammed bin Salman. The painting hasn’t been seen since its sale.

The story behind Salvador Mundi is fascinating and I’ll devote a special episode to it in the future.

I should also note that the most expensive book ever sold was also created by da Vinci. The Codex Leicester, which is a notebook from da Vinci was purchased by Bill Gates in 1994 for $30 million.

There are a host of other things which a proper billionaire needs.

Let’s start with a car. The most expensive car ever produced was the Pagani Zonda HP Barchetta. Only three of them were ever made and all three of them were delivered to the Pagani CEO Horacio Pagani. The cost of each car was a reported $17.5 million, which is far above any other car which has been sold.

The most expensive TV is the 370 inch Titan Zeus. It is a 4k display that retails for $1.6 million.

All of this is great, but what is the most expensive “thing” if we don’t worry about luxury items. What if you had the power and budget of a government?

The answer to that isn’t an airplane, a ship, or even a building. It is something that no individual, at this point in time, could possibly afford to build.

The cost of launching stuff into orbit is dropping rapidly. It isn’t totally ridiculous that at some point, perhaps in the next few decades, there might be a small, private space station in orbit.