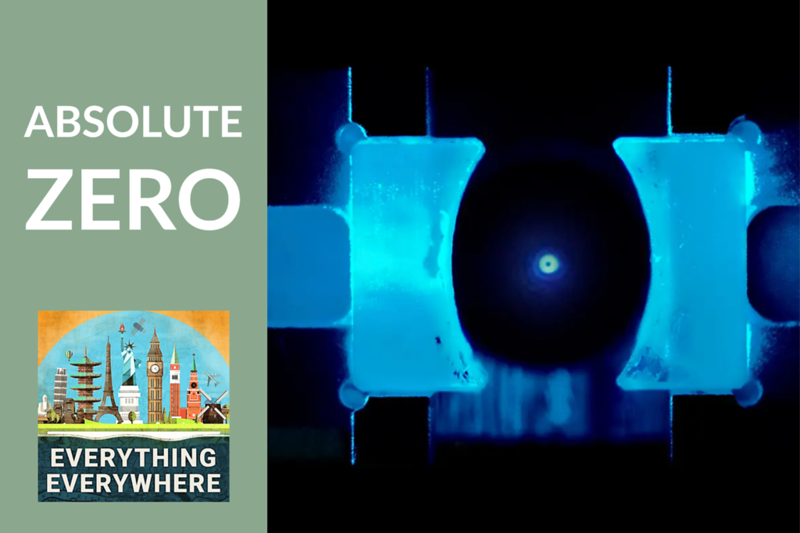 One of the interesting things about temperature is that no matter how cold you’ve ever been, or how low of a temperature anyone has ever achieved, you can always get colder, if only by a little bit.

That is because temperature has an absolute barrier that can never be broken.

Learn more about absolute zero and the attempts to get ever close to the impossible temperature on this episode of Everything Everywhere Daily.

The discussion of absolute zero can be a bit involved, however, the definition is rather straightforward.

Absolute zero is defined as ?273.15 Celcius, or ?459.67 Farenheight, or more accurately, 0 Kelvin. In fact, the entire Kelvin scale is based around absolute zero and 0 Kelvin is the very definition of absolute zero, and just as a refresher, Kelvin units are the same size as Celcius units, the only difference being where they put zero.

To understand why 0 Kelvin is an absolute which can never be crossed, we first have to understand exactly what temperature is, and to do that we need to understand the Kinetic Theory of Matter.

Kinetic Theory of Matter states that all matter is made up of small particles, atoms, and molecules, which are constantly in motion. The particles will all move randomly, bouncing off against other particles nearby. Some particles move much faster than other particles.

The average of all the particles in a given system is considered the temperature of the system.

Particles will move differently depending on the state of matter they are in. A particle in a gas will move much more than one that is a liquid, which is more than that in a solid. At what temperature the particles break away to boil or melt will depend on the substance.

As you get colder and colder, the movement of everything slows down. However, the closer you get to absolute zero, the more work you have to put into the system to make it even colder. Eventually, the amount becomes so great that it would require an infinite amount of work to make the atoms completely stop moving.

To this extent, absolute zero is to temperature what the speed of light is to velocity. You can approach it, but the closer you get, the more energy is required, and ultimately getting there is impossible.

The idea of absolute zero actually goes back before modern science. English chemist Robert Boyle proposed that there was a primum frigidum back in 1665.

However, none of them had the basic understanding of atoms that we do today.

In the 19th century, there was a race amongst researchers to reach ever lower temperatures.

The way they were able to get low temperatures in a time before electricity was widely available, is actually the same way that air conditioners and refrigerators work today: evaporation.

When a liquid evaporates, it requires energy to convert it from a liquid to a gas. The energy that it takes will cool down the substance that it takes the energy from. This is why you can cool down when its hot out by getting yourself wet, and it is why we sweat.

You can also lower temperatures by decompressing a compressed gas. If you have ever blown compressed air out of a can to clean a keyboard or something, you’ll notice immediately how cold it gets, and that frost can quickly form on the can.

In the laboratory, they had to cascade temperatures, evaporating one substance to cool down another substance. They would have to do it again and again with different substances with lower boiling points.

Much of this was literally experimentation, trying different substances at different pressures.

By 1845, Michael Faraday managed to liquify most gases except for six: oxygen, hydrogen, nitrogen, carbon monoxide, methane, and nitric oxide. These gases became known as permanent gasses and Farady speculated that they might be impossible to liquify.

However, this wasn’t the case. Scientists went to work to try and liquify these gases.

In 1877, the first drops of liquid air were created.

Liquid oxygen and nitrogen were first created in 1883 by Polish researchers. This got the temperature down to 90K and 77K respectively.

In 1898, James Dewar managed to liquefy hydrogen which brought temperatures down to 20.28 K.

At the beginning of the 20th century, there was only one gas that hadn’t been liquified. The gas with the lowest boiling point of any element: helium.

This happened in 1908 when Dutch physicist Heike Kamerlingh Onnes managed to liquefy helium at 4.222 K.

Onnes went on to discover superconductivity and was awarded the 1913 Nobel Prize for his low-temperature work.

4.222 K seems like it is getting pretty close to absolute zero. However, there is a lot that goes on between 4.2 and 0 and the physics down there gets really weird.

In 1937, they got liquid helium-4, that is helium with 2 protons and 2 neutrons, down to 2.2 K. At that point, it becomes what is known as a superfluid. There is zero viscosity and friction at this temperature. That means if you stir something which demonstrates superfluidity, it will never stop rotating.

Even at 1 single Kelvin of temperature, there was still a lot to learn.

The next big breakthrough in low temperatures occurred in 1978 with the discovery of laser cooling. This uses the light-absorbing and light-emitting properties of atoms to capture and slow a very small number of atoms.

One of the weird things which happens below 1 K is that there is a whole other state of matter known as a Bose-Einstein Condensate. This was theorized by Satyendra Nath Bose and Albert Einstein.

It was first created in 1995 when rubidium atoms were cooled to 170 nanokelvins. 179 billionths of a Kelvin!

The current world record for the coldest temperature ever created in a laboratory is 100 picokelvins which were done on the International Space Station. It is theoretically possible in space to possibly get as low as 1 picokelvin, or 1 trillionth of a degree above absolute zero.

The answer is…..yes. At least in theory. However, unlike absolute zero, there is no way to even approach absolute hot.

However, ordinary matter can’t even get to the Plank Temperature. Only subatomic particles can.

There is another temperature called the Hagedorn Temperature, and that is basically the temperature where hadronic matter, the stuff we and our world are made of, just fall apart.

This is about 1.7 trillion kelvin.

This has actually been achieved at the Large Hadron Collider in Europe with subatomic particles. In 2012 they announced they very briefly got particles to reach 5.5 trillion Kelvin.

To put this in perspective. The surface of the sun is only 5,778 K and the interior of the sun is believed to be 15 million degrees kelvin.

A record was recently set in a Chinese fusion reactor experiment where they reached a temperature of 120 million Kelvin for over 100 seconds….which is nowhere close to either the Plank or Hagedorn temperatures.

The quest to reach absolute zero is one that we will never achieve. However, it is a quest that has rewards for just coming close. We have made huge advances in physics and our understanding of the universe by coming absurdly close to absolute zero, but never quite touching it.