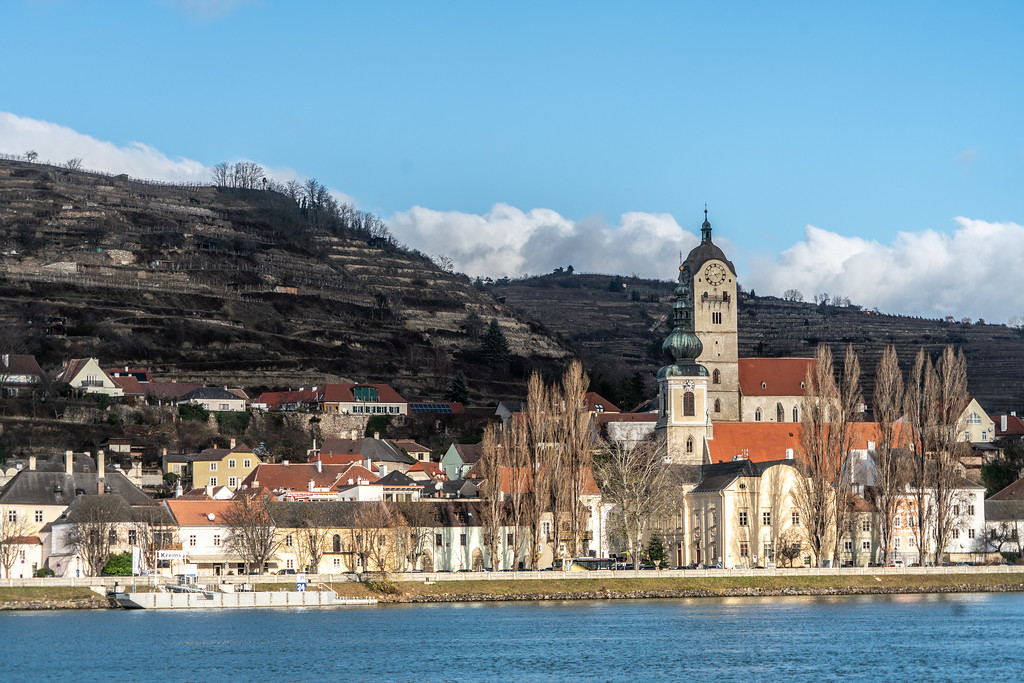 The Wachau Wachau Cultural Landscape is an Austrian World Heritage Site location along the Danube River approximately between the towns of Krems and Melk.

It is one of the most popular world heritage sites in the country attracting thousands of riverboat passengers each year, as well as visitors from the nearby capitals of Vienna, Bratislava, and Budapest.

The valley has a rich past dating back to prehistory and has played an important part in the history of Austria and Europe.

The valley is also one of the best wine-producing regions in Austria.

A human presence has been found to have been in the Wachau Valley dating back to the paleolithic area. However, modern human involvement in the valley and the beginning of cultivating the landscape dates back to around the year 800 CE with the advent of viniculture in the region.

The House Babenberg came to ascendancy in the 10th century and ruled the region until its fall in the 13th century. During their rule, they donated the Abbey of Melk to the Benedictine order in the 11th century. The German name for the Abbey (Stift Melk) comes from this donation by the Babenberg family (it comes from “stiften” which is the German word for donation).

One of the most noteworthy events in the history of the Wachau Valley was the imprisonment of the English King Richard the Lionhearted in the 12th century. He was accused of disrespecting the Austrian flag as he was passing through the area, returning from the crusades in the Holy Land. Babenberg Duke Leopold the V imprisoned him, and he was eventually ransomed for a ransom of 35,000 kg of silver.

House Babenberg was replaced by the Hapsburg dynasty which ended up ruling the Holy Roman Empire, and the Austro-Hungarian Empire, up until the end of WWI.

The valley was declared a UNESCO List of World Heritage Site in December 2000, recognizing its “riverine landscape” and “medieval landscape that depicts architectural monuments, human settlements, and the agricultural use of its land”.

What to do and See

Touring the Valley – Every visitor should take a trip up and down the valley, stopping in the smaller towns along the way. Some of the towns and villages along the river include Dürnstein, Spitz, Willendorf, and the endpoint cities of Krems and Melk.

Melk Abbey – By far, the most outstanding single attraction in the entire valley is Melk Abbey (aka Stift Melk in German). If it wasn’t a world heritage site through its location in the Wachau Valley, it could easily be listed on its own merits.

Not only does it have a fantastically decorated church, but the library is considered one of the best medieval libraries in Europe. One of the characters in Umberto Eco’s novel “The Name of the Rose” was Adso of Melk, in honor of the great abbey library.

Tours of the abbey are offered several times throughout the day. Make sure to get your tickets in advance as tour groups and passengers from river cruises often will reserve most of the tickets.

Dürnstein Castle ruins – This was the castle where Duke Leopold V held Richard the Lionhearted from 1192 to 1993. The castle is a 20-minute walk from the Dürnstein town center.

Vineyards – The Wachau Valley is probably the top wine-producing region in Austria. Here you can find some fantastic white wines varietals which are grown in the valley, such as grüner veltliner and riesling. Most vineyards will only be open seasonally. I visited in December and there was very little wine tourism going on.

Christmas Markets – As with many towns along the Danube, they run Christmas markets to cater to passengers on riverboats. The Melk Christmas market isn’t necessarily the best Christmas market I’ve seen in Europe, but they do have good food and an interesting city to walk around in. Reason enough to pay a visit in December when crowds are otherwise smaller.

The Wachau Valley is a photographer’s playground. There is so much to photograph it is hard to narrow it down to just a few things. A few suggestions for your trip:

There are many options for where to stay in the Wachau Valley. The most popular locations would be in Melk and Krems, but there are also rooms available in nearby St. Polten. If you are willing to do a day trip, you can also find rooms in Vienna as well.

The Wachau Valley is extremely accessible and easy to reach.

The closest major airport is Vienna International Airport (VIE) which is about a 1-hour drive from the Wachau Valley, depending on traffic. Bratislava and Budapest also have airports which a bit farther away but are still within driving distance.

The Danube is one of the most popular rivers in the world for river cruising. A large number of the tourists who visit the Wachau Valley will be doing so via a riverboat. There are many companies that provide cruises along this section of the Danube.

The Wachau Valley is approximately a 90-minute drive from Vienna. You can reach Melk from Vienna via highway-1.

This part of Austria has four seasons. Temperatures in the winter can and will dip below freezing for most of the season, and you can expect snow on the ground.

Regardless of what time of year you visit, prepare for the possibility of cold or at least seasonably cool weather.