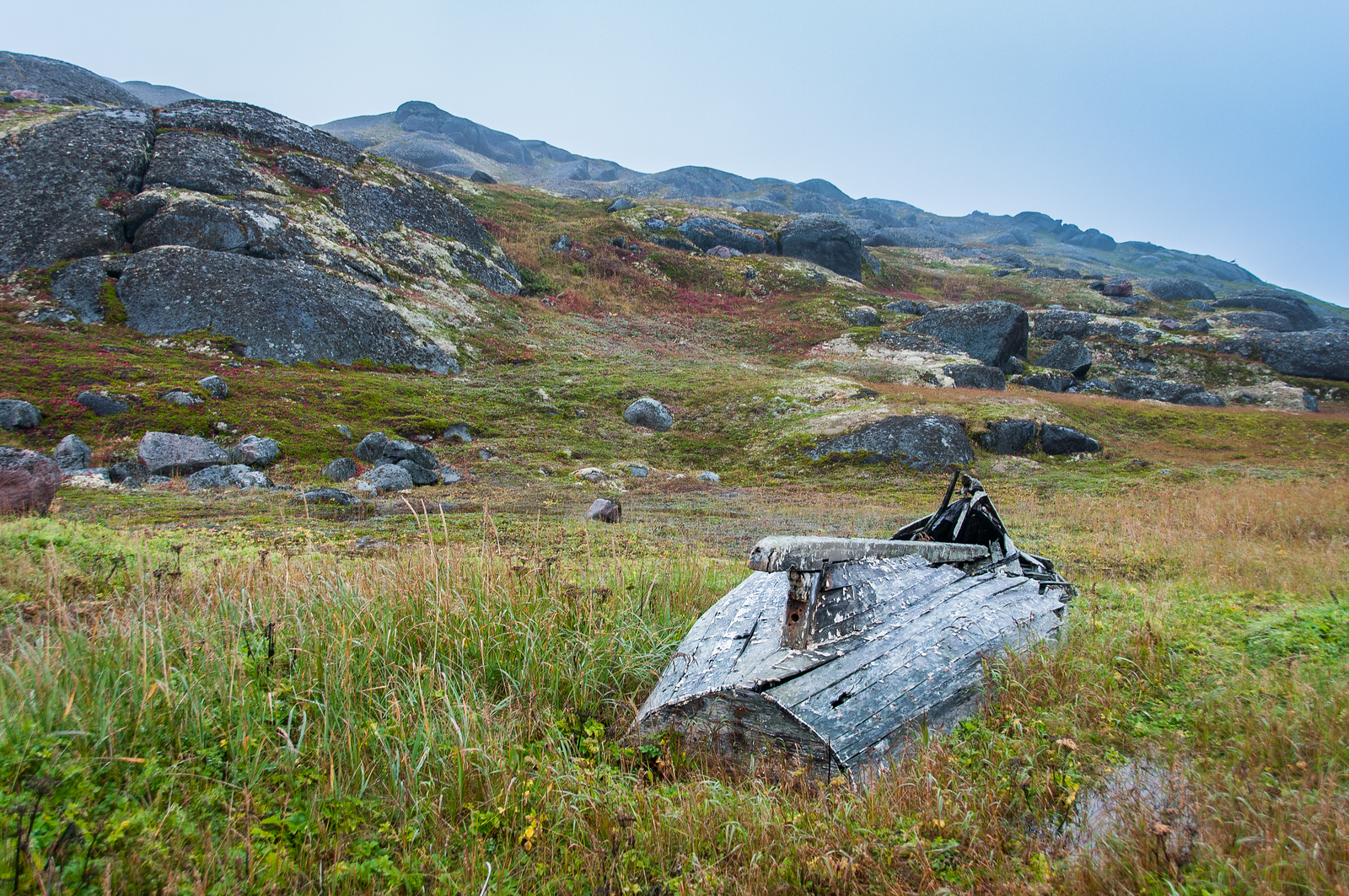 From the World Heritage inscription for the Red Bay Basque Whaling Station:

Situated in Labrador, in north-eastern Canada, on the shores of the Strait of Belle Isle, Red Bay was an Arctic maritime base for Basque mariners in the 16th century. It is the earliest, most comprehensive and best preserved archaeological testimony of a pre-industrial whaling station. It was used for coastal whale hunting in the summer, the butchery of the whales, and the rendering of the oil and its storage. The whale oil was sold in Europe primarily for lighting purposes. The property includes the remains of rendering ovens, cooperages, a wharf, living quarters and a cemetery, together with the underwater wrecks of vessels and whalebone deposits.

As of my visit in September 2013, Red Bay was Canada’s newest UNESCO World Heritage Site. It was added to the list at the meeting in Cambodia in June.

The Red Bay site commemorates the whaling station which was established by Basque whalers in the 1530s, which if you do the math is only a few decades after Columbus arrived in the Americas. There have been rumors that Basque maybe have visited North American several decades before Columbus but kept it a secret so no one else would fish in their cod waters.

Red Bay is the oldest confirmed Basque settlement in the Americas. The evidence of human habitation is obvious if you walk around nearby Saddle Island. Harpoons, clay tiles, graves, and other items have been found and dated to the 16th century. Researches have identified areas where the blubber was boiled in large cauldrons, barrel making sites and other parts of the whale oil manufacturing process.

The greatest treasures, however, were found under the water. Several sunken ships have been found in the area which has shed insight into how the Basques lived and worked.

Despite Red Bay being a very small community, there are 3 different buildings with displays and interpretative. There is a Parks Canada building near the entrance to the city, the community center, and an interpretive center that is on the water.

As Red Bay is one of the more difficult world heritage sites to visit in Canada, it is worth bundling it with a trip to the L’Anse aux Meadows in the north of Newfoundland. You can either travel between the two sites by car ferry, or there are short flights from St. Anthony, Newfoundland and Blanc Sablon, Quebec, which is on the border with Labrador.

The Red Bay Basque Whaling Station is a cultural UNESCO World Heritage Site in Canada. It is located in the province of Newfoundland and Labrador and was inscribed in 2013. The site is also a National Historic Site of Canada and was added in 1979.

Red Bay Basque Whaling Station is a fishing village and once the site of the Basque whaling stations. It is located in the southern coast of Labrador. The fishing village flourished from the early 16th to the 17th century and served as a major whaling area. During the time of its operation, the village had 3 Basque whaling galleons and 4 small chalupas. These were used in capturing whales. The recognition of this abandoned site came to be after the discovery of these vessels. This made Red Bay one of America’s most important underwater archaeological sites.

The Red Bay Basque Whaling Station is situated on a natural harbor on the bay of the same name – Red Bay. The name was formulated due to the red granite cliffs that were prevalent in the region. Due to the sheltered location of the harbor, it became a mooring site for naval vessels during the Second World War. There are two main islands in this World Heritage Site: Penney and Saddle Islands. Both of these islands were used as part of the whaling operations while it was still active. San Juan is the sunken vessel that was uncovered at the site and is located near Saddle Island.

During the time of its operation, Red Bay Basque Whaling Station had sailors from northern Spain and southern France would come here to do whaling activity. They had more than 600 men and 5 whale ships in an effort to catch bowhead and right whales – two of the most common types of whales found in the region. The San Juan vessel sank in the Red Bay during 1565 due to a storm. Aside from this large vessel, there are also several other smaller vessels that had been recovered since the Red Bay was named a UNESCO protected area.

The Red Bay Basque Whaling Station was added as a UNESCO World Heritage Site during the 37th session. The inscription signifies that this site is of outstanding cultural and universal value. It also serves as a commitment to protect Red Bay and its surrounding areas linked to the heritage of whaling in the region.

Red Bay Basque Whaling Station is a symbol of the largest and most complete industrial-scale activity for whaling in the world. There are also many artifacts and tools that were discovered at the site. These artifacts provided a glimpse into the whaling process itself, which was instrumental to the growth and expansion of the whaling industry in this part of Canada.