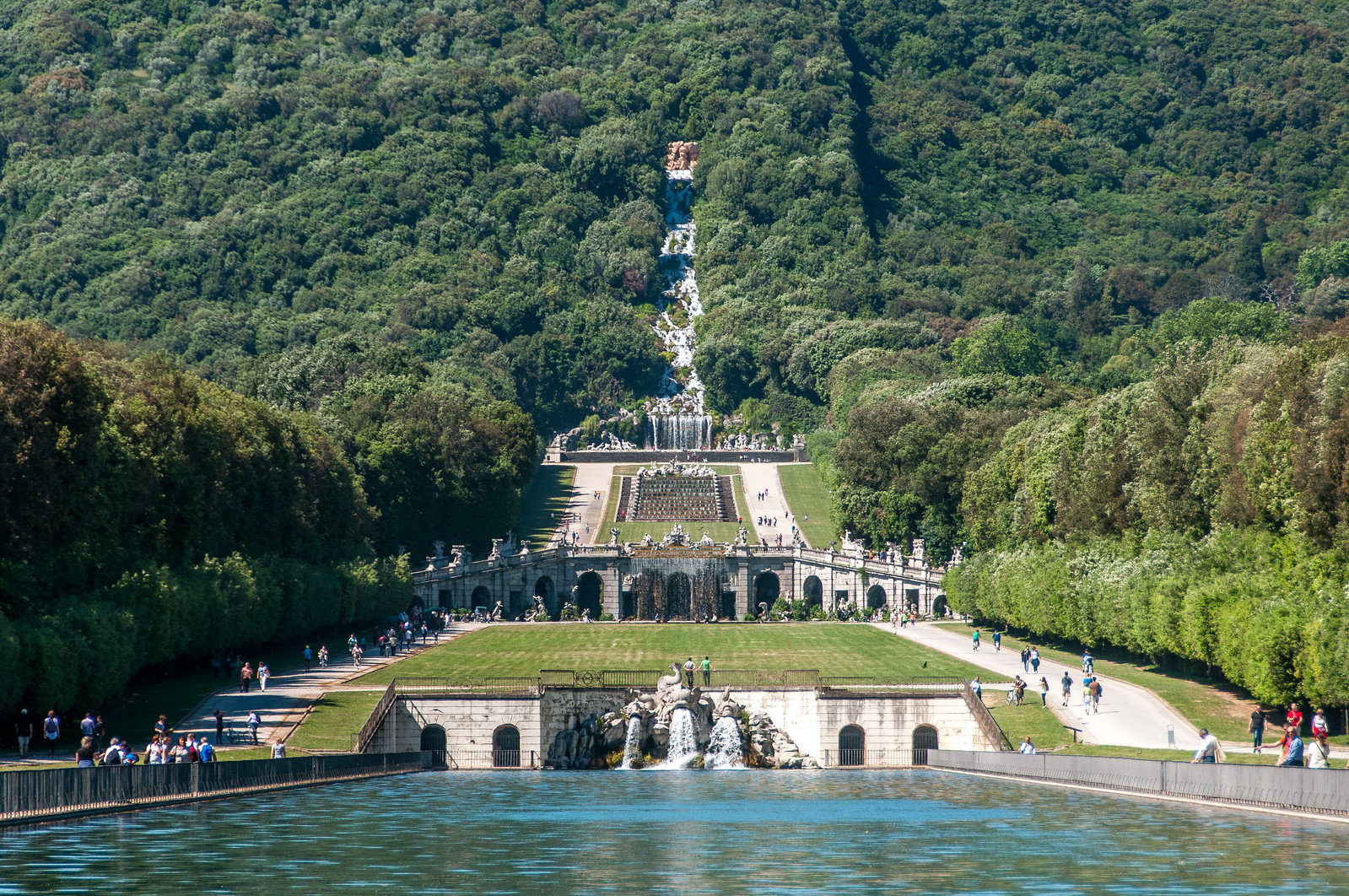 From the World Heritage inscription for the 18th-Century Royal Palace at Caserta with the Park, the Aqueduct of Vanvitelli, and the San Leucio Complex:

The monumental complex at Caserta, while cast in the same mold as other 18th-century royal establishments, is exceptional for the broad sweep of its design, incorporating an imposing palace and park, and also much of the surrounding natural landscape and an ambitious new town laid out according to urban planning precepts of its time. The industrial complex of the Belvedere, designed to produce silk, is also of outstanding interest because of the idealistic principles underlying its original conception and management.

In 1734 Charles III, son of Philip V, became King of Naples, a self-governing kingdom that was no longer part of the Spanish realm. He decided in 1750 to build a new royal palace, to rival the Palace of Versailles. It was designed to be the center of a new town that would compete with leading European cities. He employed architect Luigi Vanvitelli, then engaged in the restoration o St Peter’s in Rome. The Bosco di San Silvestro, on the two hills of Montemaiuolo and Montebriano, was covered with vineyards and orchards when in 1773 Ferdinand IV decided to enclose it and create a hunting park.

The hill of San Leucio takes its name from the Lombard church at its top. A hunting lodge, the Belvedere, had been built at its foot in the 16th century by the Princes of Caserta. The fief had been purchased by Charles Ill, and in 1773 Ferdinand IV initiated work on the Old Hunting Lodge, to be abandoned after the death of his son. In 1778 the king decided to begin the production of silk. His architect, Collecini, converted the building for this purpose, as the center of a large industrial complex, including a school, accommodation for teachers, silkworm rooms, and facilities for spinning and dyeing the silk. He issued a series of laws in 1789 to regulate the San Leucio Royal Colony: this laid down piecework rates of pay, abolished dowries, and prescribed similar clothing for all the workers, in a form of proto-socialism. During the next decade, plans were made for enlargement of the village, and Collecini produced designs for a town, to be known as ‘Ferdinandopolis’, but this dream was not realized because of the French occupation.

The fishponds in the gardens of the Royal Palace, the Royal Silk Factory and the planned new town all required large amounts of water, and so the Carolino Aqueduct was built (completed in 1769) to bring water from the Fizo spring over a distance of 38 km to the top of Montebriano. In 1744 Charles III acquired the rich Carditello estate. The hunting lodge there was built in 1784, as part of a complex of rural houses and roads radiating fanwise from the main building. This had the royal apartments in the center and rooms for agricultural and stock-rearing activities on either side.

I was very impressed with Caserta.

I knew nothing about this site before I visited and I came away wondering why I haven’t heard more about it. Caserta is easily on the same level as Versailles and Schönbrunn. Not only had I never heard of it, but most of the people who were visiting were Italians, not foreigners, which is the exact opposite of what you see at almost every other Italian monument or attraction.

The real highlight of Caserta is the enormous waterworks which extends out several kilometers from the palace itself. As can be seen in the image, it extends up a mountain with waterfalls bringing the water down to the fountains and pools on the level of the garden. To experience the entire garden will take several hours of walking.

Despite being 30km from Naples, I had a very difficult time visiting Caserta. I made the mistake of visiting on a Sunday when many of the buses and trains were canceled. If you visit any other day (other than Tuesday when it is closed) getting there from Naples should be quite easy as there are regular trains and buses. The palace is a short distance from the train station can can’t be missed.

I highly recommend visiting Caserta to anyone who visits Naples. This site is very overlooked and should be better known.

The 18th-Century Royal Palace at Caserta with the Park, the Aqueduct of Vanvitelli, and the San Leucio Complex is a cultural UNESCO World Heritage Site in Italy. It was inscribed in 1997 and is located in Caserta, Italy. This UNESCO site earned its recognition due to its ability to adapt to its surrounding landscape and its integration of the construction of the palace and other features to co-exist with these elements.

The 18th-Century Royal Palace at Caserta with the Park, the Aqueduct of Vanvitelli, and the San Leucio Complex came about after King Charles of Bourbon’s desire to build an inland Royal Palace from Naples. He didn’t want to stay in his former palace anymore given that it was vulnerable to attacks from the sea. He eventually decided to build his palace in Caserta. With Luigi Vanvitelli as the architect, the construction began in 1752. But the palace wasn’t completed by the time of his death in 1773 so his son Carlo had to take over and finished the 250-meter wide façade and all five floors of the building. The palace consists of about 1,200 rooms and 1,790 windows in total.

About the 18th-Century Royal Palace at Caserta with the Park, the Aqueduct of Vanvitelli, and the San Leucio Complex

The 18th-Century Royal Palace at Caserta with the Park, the Aqueduct of Vanvitelli, and the San Leucio Complex are one of the grandest UNESCO sites in Italy, not only in terms of size but also in its spectacular display of Baroque and Early Neoclassical architectural styles. The Royal Palace of Caserta is the world’s largest royal residence. Hence, that is saying a lot given that there are a handful of royal residences in the world. It covers more than 235,000 square meters in floor area or 2.5 million square feet on all five floors of the building.

When architect Luigi Vantivelli developed the design for the Royal Palace at Caserta, it was believed that he modeled it after the Versailles. This is not in relation to the design and disposition but rather in the ability to assemble the space for king, court, and government into one massive building. When this castle was still being built, the population of Caserta had to be moved to include 10 more kilometers in order to provide the additional workforce.

The Palace of Caserta is the primary feature of the site. It follows a rectangular plan with all four sides connected by two orthogonal arms. Hence, there are four inner courts within this royal palace. It also has 5 floors and 1,200 rooms including two dozen state apartments, a massive library, and a theater that was designed after Naples’ Teatro San Carlo.

Aside from the palace, there are two other components to the UNESCO site 18th-Century Royal Palace at Caserta with the Park, the Aqueduct of Vanvitelli, and the San Leucio Complex. You can learn more about them below:

As the name implies, this part of the 18th-Century Royal Palace at Caserta with the Park, the Aqueduct of Vanvitelli, and the San Leucio Complex is an aqueduct. It was commissioned for by King Charles VII as part of the Royal Palace of Caserta and was also designed by Architect Luigi Vanvitelli. It was built to supply water to the palace and San Leucio Complex. The construction for this aqueduct started in 1753 and was officially opened in 1762.

This complex is another key component of the UNESCO site 18th-Century Royal Palace at Caserta with the Park, the Aqueduct of Vanvitelli, and the San Leucio Complex. It serves as the commune of Caserta within the Campania region in Italy. The site of the complex is a former royal hunting lodge. At the time of its construction, they used the most advanced technologies in Europe.