For generations the buffalo were the Plains Indians’ source of food, clothing, tools and dwellings. These animals were gifts from their Gods, and each piece of the animal had a purpose. Even the buffalo chips were used as fuel. They were plentiful on the plains before the middle of the 1800’s, like pigeons in New York City today. It would be hard to believe they would ever near extinction.

Yet they were close to being wiped off the planet. We visited the buffalo of Caprock Canyon State Park earlier this year, and after doing some digging I’ve found their story to be fascinating.

The Changing Face of the Plains

Despite their large numbers the High Plains had been stripped of most buffalo by white hidehunters by the 1860’s. They were greatly helped by the development of high powered repeating riffles. An experienced hunger with a long range rifle could kill 100-150 buffalo a day, leaving their carcasses to rot after their hides had been stripped. This destruction and miles of rotting carcasses was especially infuriating to an already unhappy group of people who’s homes were being encroached upon. This outrage would lead to violence. 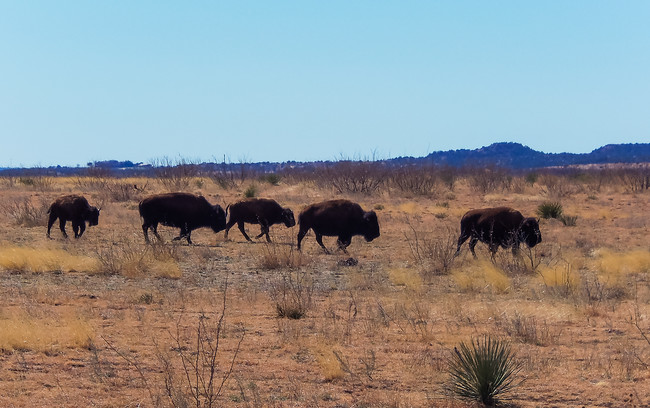 The Comanche Campaign, a series of battles over the late 1860’s – mid 1870’s, was designed to force the Comanche people to retreat to their designation reservation in the midst of all this slaughter. The United States government used the destruction of buffalo as a tactical advantage to help them solve their “Indian problem.”

…The older Indians at first will be unwilling to confine themselves to these districts (reservations). They are inured to the chase and they will not leave it. The work may be of slow progress, but it must be done. If our ancestors had done it, it would not have to be done now; but they did not, and we must meet it. Aside from extermination, this is the only alternative now left us. We must take the savage as we find him, or rather as we have made him.

…When the buffalo is gone the Indians will cease to hunt. A few years of peace and the game will have disappeared. In the meantime, by the plan suggested we will have formed a nucleus of civilization among the young that will restrain the old and furnish them a home and subsistence when the game is gone. — Excerpt from the US Indian Commissioner’s Report, January, 1868

The Surprise at the Bottom of Palo Duro Canyon

As the Comanche Campaign came to a close and the last of the nomadic plains people were forced into reservations, the area became safer for cattlemen. Charles Goodnight was one of them. He started searching for Palo Duro Canyon, where the last of the large battles between the US Army and free-roaming Native Americans took place in the Southern Plains. He knew water was available at the bottom of the canyon, a resource rare in the area but necessary to raise a significant amount of cattle. The adjacent plains would also be great grazing in the summer. Goodnight found the canyon and established the first cattle ranch in the panhandle of Texas in 1876 and eventually named it the JA Ranch after his business partner. 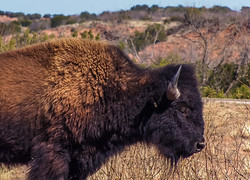 Goodnight was shocked when he found buffalo at the bottom of the canyon. Gone from the plains, he found an astounding 10,000 to 12,000 buffalo in the canyon. Goodnight knew that the buffalo would compete with his cattle for the canyon’s grasses. Not wanting to slaughter the animals, he drove the buffalo to the furthest part of the canyon from his ranch. He accomplished this fete by shooting near their hooves and continued to do so with any stragglers he found.

But word got out that buffalo were plentiful in the canyon, and buffalo hunters made short work of slaughtering the herd. When it became clear that the hide hunters were exterminating every last buffalo in the canyon, Charles Goodnight’s wife Mary Ann encouraged him to start a herd of his own. He reported started with two roped calves and grew his famous herd to 250 buffalo. When he left the JA Ranch to move to a new ranch, he moved the herd with him.

The Legacy of the Goodnight Herd

In 1997, the herd was donated to the Texas Parks and Wildlife Department. After sampling the DNA of the buffalo, most were found to be pure – and unique. This was truly the last pure herd of the great wild southern herd that roamed the prairies in great number.

“What makes this herd unique is that while Goodnight shipped a lot of animals out, it appears that he never brought an animal in. Their DNA is not found in any other buffalo herd in the world. ” — Danny Swepston, wildlife district leader of the Texas Parks and Wildlife Department for the Panhandle district 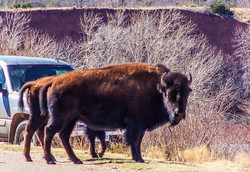 Today, the herd resides at Caprock Canyons State Park. The hope is that the buffalo will continue to reproduce and can eventually be reintroduced to roam wild in the prairie. But for now, they have to make due with a 153-acre pasture. They co-exist with the visitors that come to see them. While the visitors are instructed to keep at least 50 yards away from the buffalo, someone forgot to tell the buffalo to keep away from the visitors. When heading to get water in Lake Theo, these wild majestic creatures will walk inches away from your car. It is a pretty surreal – and unique -experience to have.

Caprock Canyons State Park is in the panhandle of Texas near the city of Quitaque. It is an hour and a half south of Amarillo, and about four and a half hours west of both Oklahoma City and Fort Worth. There are campsites available, as well as a limited amount of hotel rooms in the surrounding area. Like the rest of the panhandle, the summers can be blistering hot and the winter can bring snow. The best times to visit would be in the spring and fall.