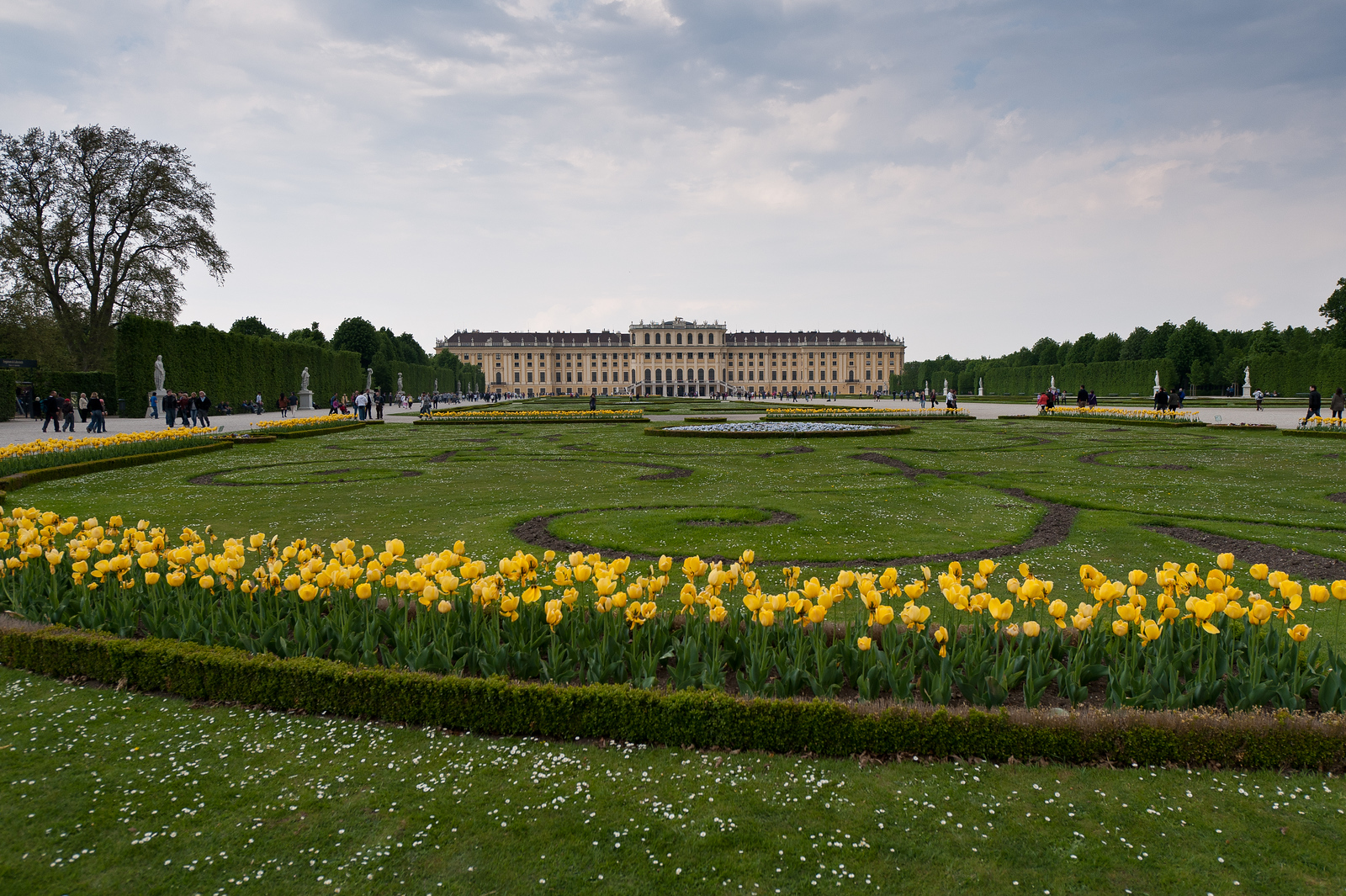 From the Palace and Gardens of Schönbrunn World Heritage inscription:

From the 18th century to 1918, Schönbrunn was the residence of the Habsburg emperors. It was designed by the architects Johann Bernhard Fischer von Erlach and Nicolaus Pacassi and is full of outstanding examples of decorative art. Together with its gardens, the site of the world’s first zoo in 1752, it is a remarkable Baroque ensemble and a perfect example of Gesamtkunstwerk

When you visit Schönbrunn Palace, you get the strong impression that at one point an Emperor or Empress of Austria visited France and was the guest at the Palace of Versailles. When they got back home they said “We have GOT to have one of those”, and construction on the palace was begun.

It is incredibly ostentatious and it is a surprise that they didn’t have a revolution in Austria as well as France.

The Palace and Gardens of Schonbrunn are one of the UNESCO World Heritage Sites in Austria. Its grandeur and beauty can compete well with that of the Palace of Versailles in France. This palace was built in the 18th century as an imperial summer residence. The palace features Baroque architecture and has over 1,400 rooms. Along with the palace, the gardens are also quite popular among tourists. With a history of over 300 years, this site reflects the tastes and aspirations of the Habsburg monarchs.

The history of the Schonbrunn Palace date back to the late 16th century when Emperor Leopold I commissioned an imperial palace to be built that would rival that of France’s Palace of Versailles. This led to the building of a Baroque Imperial Palace at the former site of the Palace of Klatterburg. This palace was built from 1696 to 1730 and consists of 1,441 rooms and apartments. The palace underwent alterations from 1816 to 1819 and after World War II.

Even though there are over 1,400 rooms in Schonbrunn Palace, only 40 of these are open to the public for those visiting the Palace and Gardens of Schonbrunn. Some of the notable rooms to be explored during your tour include the West Wing, Walnut Room, Emperor’s Audience Chamber, Empress Elisabeth’s Salon and the Franz Joseph’s Bedroom.

The Hall of Mirrors is probably the most notable part of the entire Palace of Schonbrunn. This area is filled with crystal mirrors that are placed in gilded Rococo frames.

The second half of the UNESCO site Palace and Gardens of Schonbrunn is the park and garden. This area covers up to 500 acres of land area. It was laid out during the 1900s and like the palace is also built using the Baroque style. The garden is accentuated by the impressive 44 sculptures of mythological creatures made with marbles. In addition to these sculptures, don’t forget to visit Neptune’s Fountain.

Another impressive structure within the Schonbrunn Garden is the Palm House. This structure was built in 1883 and is the largest greenhouse in Europe. It is composed of three sections and one of them contains exotic plants. The others are made up of hundreds of species of butterflies.

Another must-see when exploring the Palace and Gardens of Schonbrunn is the Classical Gloriette. This was built in 1775 on a hilltop with an overlooking view of the palace grounds. The central structure is a triumphal arch with arcaded wings on each side of the structure.

Before you make your way to Palace and Gardens of Schonbrunn in Vienna, you need to know these tips: