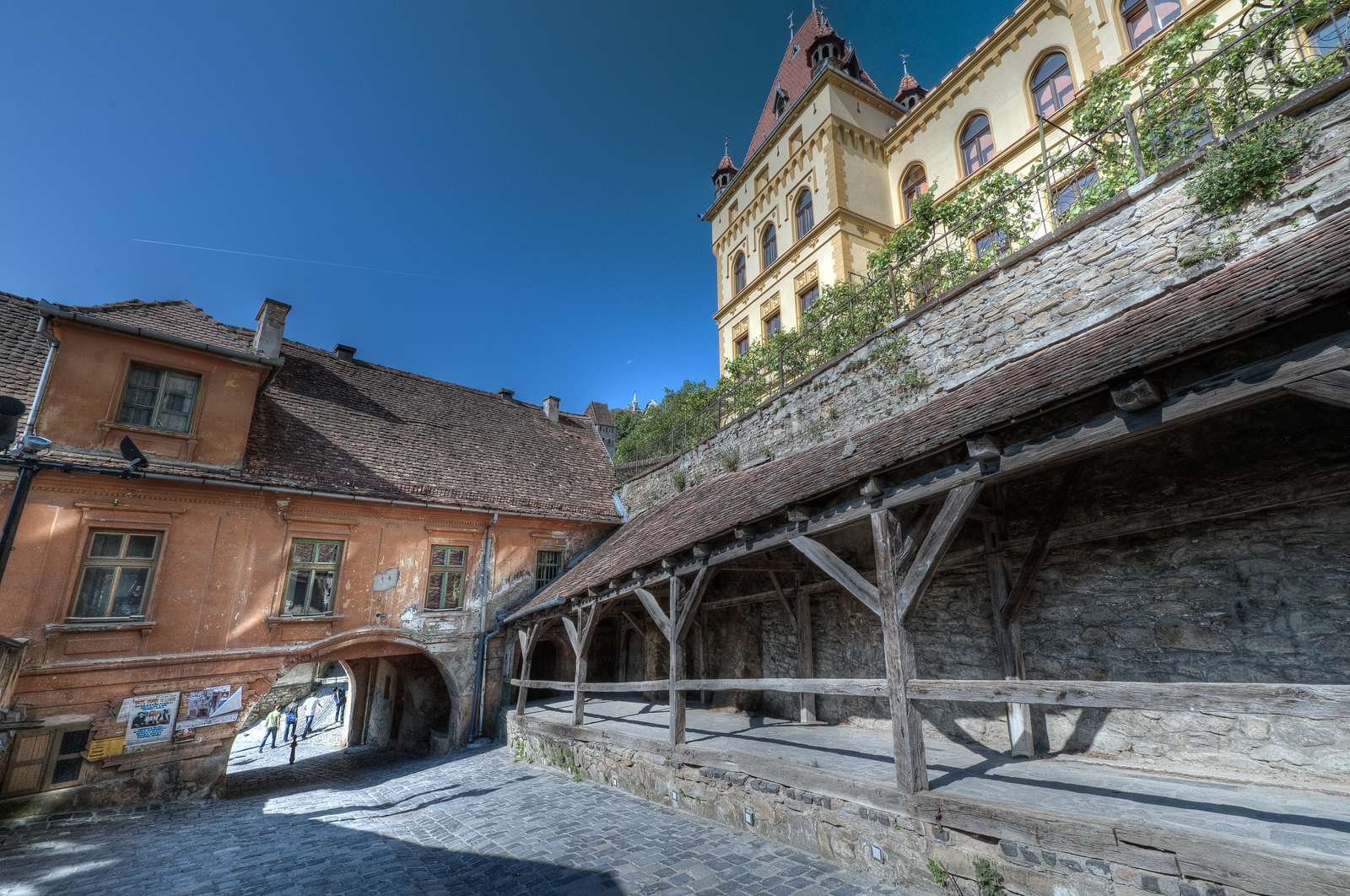 From the Historic Centre of Sighisoara World Heritage inscription:

Sighisoara, an example of a small fortified city in the border region between the Latin-oriented culture of central Europe and the Byzantine-Orthodox culture of south-eastern Europe, is an outstanding testimony to the fast-disappearing culture of the Transylvanian Saxons.

The city, which lies in the heart of Transylvania, developed on a plateau and is dominated by a hill overlooking a bend in the river Trnava. In the 13th century, German craftsmen and merchants, known as Saxons, were ordered by the Hungarian sovereigns to colonize Transylvania and protect the border of the Carpathians against the steppe peoples. They settled on a hill, called the City Hill, which has revealed traces of occupation going back to the Palaeolithic period. Following incursions by the Tatars in 1241, the fortified settlement was reinforced with walls, guarded by towers, later extended to surround the entire plateau. The town, known in 1280 as Castrum Sex, developed commercial activities thanks to the powerful guilds of craftsmen. Each guild was responsible for the construction of a tower and its defense. The importance of the town was recognized in 1367 when it obtained the title ‘Civitas’ and became the second national political entity of Transylvania. Under pressure from the Turks between 1421 and 1526, the city heightened its walls.

The historic center of Sighisoara is composed of a fortified site spread over a steeply sloping plateau and dominated by City Hill, and the Lower Town with its woody slopes lying below. These two sectors form an indissociable group corresponding to the historic boundaries of the medieval town.

Sighisoara is best known, not for its history as a Saxon town, but rather as the birthplace of Vlad Dracul and Vlad the Impaler (aka Dracula). Although the historical Vlad the Impaler has nothing to do with vampires, the popularity of vampires in popular culture has made Sighisoara a popular tourist spot in Romania. Given the medieval nature of the town and the cemetery on the top of the hill, you could totally see a vampire movie being shot here.

The Historic Center of Sighisoara is a cultural UNESCO World Heritage Site in Romania. This site was inscribed in 1999 and is known for its urban, Medieval European landscape. This small medieval city is in an excellent preserved state and most of the buildings that were constructed by the Saxon settlers during the medieval period still exist today.

The city of Sighisoara is also constructed on a hill, which protected it from invaders such as the Tatars. This was also partly responsible for the well-preserved state of the city.

About the Historic Center of Sighisoara

The Historic Center of Sighisoara represents the old historic center for the city of Sighisoara in Romania. This town was established by the Saxon colonists during the 12th century. For 850 years, the historic town center is the only living and existing testament to the culture and history of the Transylvanian Saxons. Sighisoara is best known in history as the birthplace of Vlad the Impaler, also known as Dracula. However, there is more to Sighisoara than just Dracula.

If you want to learn about the exceptional cultural heritage of Romania, this is the best place to go to. You will find everything here that will remind you about the historical and cultural heritage of the town center. The medieval flair of this town is still evident and it also features a wide range of structures including painted monasteries, fortified churches, ancient Dacian ruins, and wooden masterpieces. In fact, there are 25 architectural gems that are found within this UNESCO property that are recognized for their monumental, natural and scenic appeal.

In an effort to retain and honor its rich cultural heritage, Sighisoara is the venue for a medieval festival that is held annually. This festival features arts, crafts, stage plays, and rock music. Even though it is smaller than other neighboring cities or towns, like Sibiu or Brasov, it is an architectural gem that is reminiscent of medieval Germany. During the Communist history of the city, the German area of the town was richly preserved such that what it looks like now is the same as it did during the Communist era.

In addition to the medieval flair and architectural landscape, the historic center of Sighisoara is also strategically positioned in the trade routes of the Ottoman Empire and the rest of Central Europe. Hence, it was also commercially important. During its heyday in the 16th to 17th centuries, Sighisoara had 15 guilds and 20 handicraft branches.

Want to explore the Historic Center of Sighisoara? There are several travel options to get to Sighisoara. If you are traveling from outside Romania, the closest airport is the Targu Mures Airport in Recea, Romania (about 30 miles away) or the Sibiu Airport (about 54 miles).

You can also travel by train via the Sighisoara Train Station. There are daily trips available to and from Budapest. The total travel time is around 10 hours. If you are traveling from Vienna, you can also take the train and it will take about 12 hours. If you are traveling from Bucharest, there are also domestic trains available at several times during the day.

2 thoughts on “Historic Centre of Sighisoara”