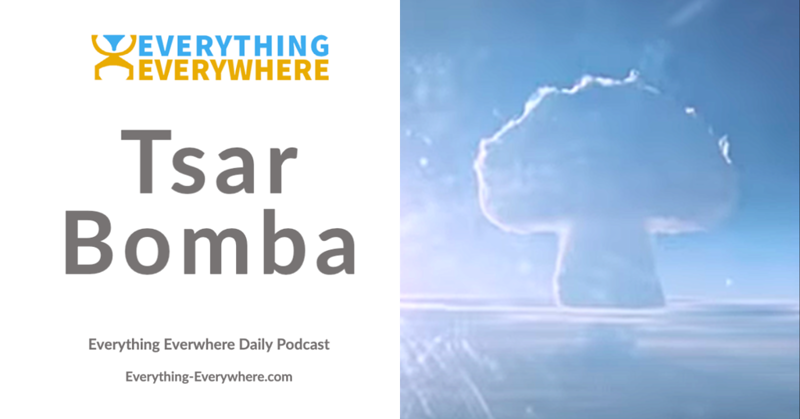 On October 30, 1961, the Soviet Union detonated the largest explosion the world had ever seen, before or since.

The explosion was so large, that it permanently changed the course of nuclear weapons development.

Learn more about the Tsar Bomba, the world’s largest nuclear explosion, on this episode of Everything Everywhere Daily.

The United States detonated its first atomic bomb on July 16, 1945, at the Trinity test site in New Mexico.

The Soviet Union detonated its first atomic device on August 29, 1949.

Once the US lost its monopoly on atomic weapons, an arms race began between the Americans and the Soviets.

The arms race wasn’t just a function of the number of weapons but across a wide range of related technologies including strategic bombers, nuclear-powered submarines, intercontinental missiles, and the size of the weapons themselves.

On November 1, 1952, the United States upped the stakes with the detonation of the first thermonuclear device, also known as a Hydrogen Bomb, or H-Bomb. Using energy from nuclear fusion instead of just fission which was used in all previous bombs, this explosion was significantly larger than all others which came before it.

The bomb, known as Ivy Mike, detonated with the equivalent of 10 million tons of TNT, or 10 megatons. In comparison, the bomb dropped on Hiroshima was only 15 kilotons.

In less than a year, on August 12, 1953, the Soviets followed suit with an H-Bomb test of their own.  Dubbed Joe 4 by the Americans, it was a 400 kiloton hydrogen bomb. Much smaller than that American device, but much larger than anything else they had previously detonated.

A year later, the Soviets detonated their first megaton size device with the RDS-37. On November 22, 1955, the device was detonated with a yield of 1.6 megatons.

Despite being the largest bomb they had ever tested, the weapon was still an order of magnitude smaller than the bombs that the Americans had.

By this time, Stalin had died and Nikita Kruschev came to power, and the Cold War had gone into high gear. It wasn’t just being a matter of being militarily prepared, it was also a cultural conflict.

In 1959, Kruschev had his famous Kitchen Debate with Vice-President Richard Nixon at a cultural exhibition in Moscow. The two went back and forth about which system was superior, and during the debate, Kruschev used a Russian expression that didn’t really translate well.

Kruschev said that the Soviet Union would surpass the United States and said  “we shall show you Kuzka’s mother’.

The American interpreter had no idea what he was saying. He knew Russian, but he didn’t know the expression. He translated it literally, talking about someone’s mother.

Showing someone Kuzka’s mother is a Russian expression for saying “I’ll show you”, or “we’ll teach you a lesson”.

I mention this because as the Soviet’s entered the 1960’s they were working on a really big bomb. The code word which was used internally for the weapon was “Kuzka’s Mother”.

The term Tsar Bomba comes from several other things in Russian history which were really big. The Tsar Bell and Tsar Cannon were a giant bell and cannon respectively. The equivalent would be calling something the “King” if it were the largest or best.

The initial plans were for a 100 megaton bomb. The reason for a bomb of this size was mostly for propaganda purposes. A bomb this large would be impossible to deliver with existing missile technology, and extremely difficult to do with a bomber.

The test of the weapon was ready to go in 1961. It was a matter of when it would be detonated to maximize propaganda.

At first, it was delayed due to a summit between Kennedy and Kruschev. On October 17, 1961, Kruschev announced the bomb at the 22nd Congress of the Communist Party of the Soviet Union.

On October 30, the test was ready to go.

The size of the test was reduced from 100 megatons down to just 50. “Just” 50 megatons might not really hammer home just how big this explosion would be. 50 megatons would still be over 3x larger than any other nuclear explosion.

The test would take place on Novaya Zemlya, a remote archipelago located above the arctic circle.

The bomber crew was only given a 50% chance of surviving the mission.

The calculations put the bomber at a distance of 45 kilometers away when the bomb would detonate.

The pilot, Andrei Durnovtsev, actually ignored his orders after the bomb was dropped, by increasing his speed away from the bomb and going as fast he could. If you only have a 50% chance of survival, why not?

The explosion was tremendous. The diameter of the fireball was 8km or 5 miles wide at its maximum. Oddly enough, the shockwave was so powerful it bounced off the ground and prevented the fireball from reaching the surface.

The mushroom cloud from the explosion was 67 km or 42 miles high, or seven times the height of Mount Everest.

Despite being detonated 4 kilometers above the surface, it still registered as a 5.2 earthquake on the Richter scale.

A village located 55 kilometers away from the blast was completely leveled.

The heat from the explosion would have caused 3rd degree burns 100 km away.

One observer was able to see the flash and feel the heat from 190 km.

Windows were damaged as far away as Finland and Norway.

The explosion was equivalent in size to 20% of every nuclear weapon which had been detonated up to that point and was 3,000x time the size of the bomb dropped on Hiroshima.

The bomber which dropped the bomb survived, but only after dropping over a kilometer when it was hit by the shockwave.

The fallout from this explosion (pun intended) was widespread.

The Soviets saw no need for testing anything larger. A larger bomb would result in a large amount of nuclear fallout, of which the vast majority of it would fall on the Soviet Union.

The primary designer of the bomb was a physicist named Andrei Sakharov. The bomb changed his mind about the development of nuclear weapons. He became a Soviet dissident and was awarded the Nobel Prize in 1975 for his effort to stop the spread and escalation of nuclear weapons.

The bomb was so large, that neither the US nor the Soviet Union saw any point in building larger weapons. They couldn’t easily be delivered, and the damage was so great that it could hurt the party which dropped it, not just the recipients.

The bomb helped pave the way for the 1963 Partial Test Ban Treaty which banned the surface and space detonation of nuclear weapons.

However, I’d be remiss if I didn’t at least mention one particular scientist who had absolutely no problem thinking of even bigger bombs: Edward Teller.

Teller was unquestionably a brilliant physicist. Born in Hungary, he studied in Germany and immigrated to the US along with other prominent German scientists to escape anti-semitism.

He worked on the Manhattan Project, and he was largely responsible for the development of the hydrogen bomb. It earned him the name the Father of the H-Bomb.

Teller was far more concerned about the theoretical problems of building weapons, and not the practical. His focus was on what could be built, not what should be built.

One of his designs was for a 10,000 megaton bomb or 10 gigatons. A bomb so stupefyingly large, it is hard to even put it into words.

A 10 gigaton bomb couldn’t ever be practically tested…..anywhere. It would be the equivalent of all previous explosions, nuclear and conventional, in human history.

A bomb of this size couldn’t even be delivered. The largest airplane or rocket ever built couldn’t carry it.

How big would the explosion of such a weapon be? Nuclear historian Alex Wallerstein said:

A 10,000 megaton weapon, by my estimation, would be powerful enough to set all of New England on fire. Or most of California. Or all of the UK and Ireland. Or all of France. Or all of Germany. Or both North and South Korea. And so on.

Thankfully, Teller’s idea when absolutely nowhere.  Not surprisingly, Edward Teller was the inspiration for the character Dr. Strangelove.

60 years later, the Tsar Bomba remains the largest explosion in human history, a distinction which it will hopefully keep for the rest of human history.