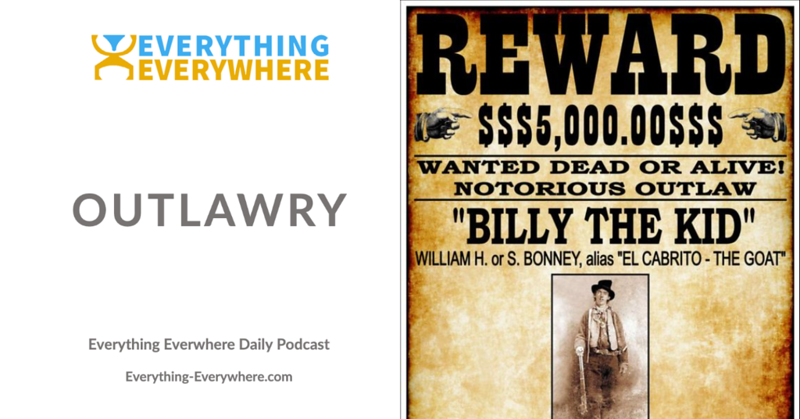 I’m sure everyone hearing this is familiar with the word outlaw. It mostly used as a synonym for “criminal”.

However, if I can paraphrase Inigo Montoya from The Princess Bride, “that word does not mean what you think it means.”.

Learn about the ancient punishment of outlawry, and how it was used throughout the world and throughout history, on this episode of Everything Everywhere Daily.

My audiobook recommendation today is The Notorious Reno Gang: The Wild Story of the West’s First Brotherhood of Thieves, Assassins, and Train Robbers by Rachel Dickinson.

They were the first outlaws to rob a moving train. But from 1864 to 1868, the Reno brothers and their gang of counterfeiters, robbers, burglars, and safecrackers also held the town of Seymour, Indiana, hostage, making a large hotel near the train station their headquarters.

When you hear the term “outlaw” you think of criminals, perhaps from the Old West, and names like Billy the Kid or Jesse James.

As most people understand the term today, an outlaw is someone who has violated the law, or who has done things outside of the law. That certainly is true, at least in terms of how the word is used today.

However, the word outlaw has a much more ancient and more specific meaning, which goes back centuries.

The word stems from Medieval English Common Law where a “Writ of Outlawry” could be issued against someone. They were usually issued against people who were not present in court because they failed to honor a summons, or because they fled. It was also only used in criminal matters.

The writ would give the person the status of Caput lupinum, which is Latin for wolf’s head.

What this did is set the person outside the protection of the law. Hence, they became outlaws.   The wolf’s head thing comes from the fact that they would have the legal standing of a wolf in the realm.

A person outside the rule of law could be killed by anyone without punishment, and all of their property could likewise be taken without any repercussions.

Moreover, no one else was allowed to assist or help you in any way. If you did, you could be found guilty of aiding and abetting, which could also get you in trouble.

Killing an outlaw was not only legal, it was considered a good deed. If you killed an outlaw, you were to announce the fact and report it immediately.

It should be noted that a writ of outlawry wasn’t necessarily a sentence of guilt. It was usually passed when someone fled justice, even if they were innocent.

The best-known example of an English outlaw would be the fictional character, Robin Hood.

Why was Robin Hood an outlaw? According to the story, he was a supporter of King Richard the Lionhearted who went off to fight in the crusades and an enemy of the usurper King John.

King John issued a writ of outlawry against Robin Hood to try and get rid of him.  That was why Robin Hood had to hide out in Sherwood forest. He couldn’t just hang out in a populated area where anyone could kill him. That was why he grouped with other outlaws, his band of merry men.

That would probably also explain why he robbed from the rich and gave to the poor. It was a PR campaign to get the people on his side, who could otherwise have an incentive to kill him.

This idea of putting someone outside the protection of the law was used in many countries.

Many medieval German and Scandanavian countries had similar concepts. In Germany, it was known Vogelfrei, which means freedbird, or free as a bird.

We have been conditioned by Lynard Skynard to think of being “a freebird” as being a good thing, but that wasn’t what it meant back then.

Here is the translated text of the penal code from 16th century Bamberg, in what is today Germany.

As you have been lawfully judged and banished for murder, so I remove your body and good from the state of peace and rule them strifed and proclaim you free of any redemption and rights and I proclaim you as free as the birds in the air and the beasts in the forest and the fish in the water, and you shall not have peace nor company on any road or by any ruling of the emperor or king…..his body should be free and accessible to all people and beasts, to the birds in the air and the fish in water so that none can be made liable for any crimes committed against him

If such a person was killed, their body was not to be buried, so it would be consumed by the birds and the beasts.

Perhaps the best example of this came from ancient Rome. During the first civil war, the dictator Sulla issued a list of people who were proscribed. The proscription list was a list of his enemies who usually were also rich. Anyone killing a proscribed person was entitled to a percentage of their estate, with the rest going to the government.

It was a way to eliminate his opponents and fill the treasury all in one fell swoop.

Octavian and Marc Antony also issued a proscription list when they took control during the Second Triumvirate as well.

At the Congress of Vienna in 1815, several nations in Europe declared Napoleon Bonaparte to be an outlaw, putting him beyond the protection of the law.

So, coming back full circle to the examples I gave at the start of the episode, was outlawry something which existed in the United States? Were Billy the Kid and Jesse James outlaws in the traditional English sense of the word?

The answer is, not really. In the United States, we have a thing called the constitution, which explicitly requires due process. Even if someone is a mass murder that you know is guilty, you can’t just go and murder them. They have to have their day in court.

The “Wanted: Dead or Alive” posters were legally suspect, and if they were ever challenged before an actual court, they almost certainly would have been ruled invalid.

In many parts of the old west, there was little to nothing in the way of formal legal oversight, and many things were done that probably shouldn’t have been.

Today, the modern equivalent of outlawry would be bounty hunting. You can put a price on someone’s head and have licensed bounty hunters chase them down, but they can’t just outright kill them.

There is one final thing about outlawry I should mention before I finish. The British Outlawries Bill.

This is the ceremonial bill which is the first bill introduced after the queen’s speech to open a session of parliament. The bill is totally symbolic and represents the Parliament’s independence from the monarchy and freedom to discuss whatever subjects they wish.

There is nothing special about the bill other than tradition. There are other parliaments around the world which use other bills instead. The British have used the Outlawries Bill since 1727.

There really aren’t any true outlaws in the traditional sense of the word anymore.  The line between enforcing outlawry and vigilantism is thin, and not having people legally killed on the streets 21st century is probably a good thing.