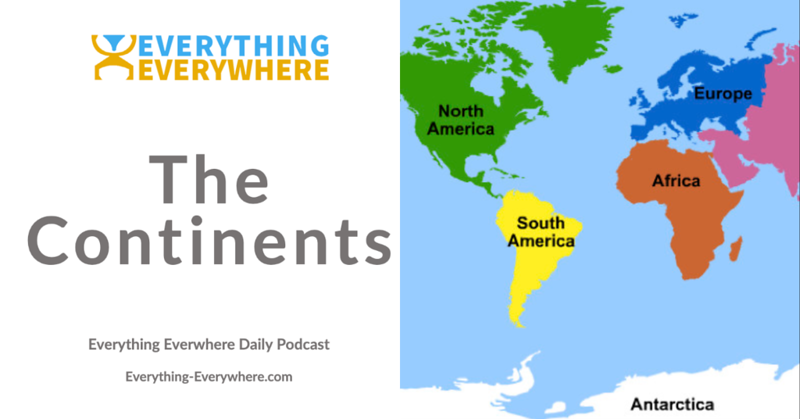 How many continents are there? That sounds like a really easy question. After all, there are only so many giant landmasses on the planet and we can easily count them with our fingers.

Yet, for something seemingly so simple, the answer to the question can be surprisingly complicated.

Learn more about the continents on this episode of Everything Everywhere Daily.

Believe it or not, I’ve been to every continent. And during my travels around the world, I’ve brought my Scottevest gear with me to every one. Scottevest jackets, shirts, and pants have made it easy to get through airports, to carry my stuff if I’m just walking around town, and to make sure I leave nothing behind when I’m walking on an ice field in Antarctica.

There are seven continents.

The executive producer of Everything Everywhere Daily is Jame

The standard list of continents which most people learn is Asia, Europe, Africa, North America, South America, Australia, and Antarctica.

Before we get into the weeds of that list, however, we should define what a continent is.

The standard definition of a continent is: continents are large landmasses with clearly defined boundaries and separated by oceans.

That’s a fine working day-to-day definition, but certainly, scientists must have something better than that.

The Geological Society of American defines a continent as follows:

“The ‘Glossary of Geology’ defines a continent as ‘one of the Earth’s major landmasses, including both dry land and continental shelves.’ It is generally agreed that continents have all the following attributes: (1) high elevation relative to regions floored by oceanic crust; (2) a broad range of siliceous igneous, metamorphic and sedimentary rocks; (3) thicker crust and lower seismic velocity structure than oceanic crustal regions; and (4) well-defined limits around a large enough area to be considered a continent rather than a microcontinent or continental fragment

Ok, that can help a bit, but it leaves a lot of questions unanswered.

For starters, how in any of these definitions are Asia and Europe separate continents?

Asia and Europe are part of one big Eurasian landmass. There is nothing that separates the two. The traditional division of the continents is the Ural Mountains, but to be honest, that was selected by Russia a long time ago, just so they could say that Moscow was a European Capital.

The divisions between Europe and Asia are cultural, not geologic or geographic. You can take a train from London to Singapore, and never cross an ocean or a sea.

By any strict definition you want to use, there isn’t much of an excuse for separating Europe and Asia. So, there should be 6 continents, not 7, right?

Well, if we do that, then we should apply the same to the Americas. North and South America are connected. They are one contiguous landmass with a northern and southern lobe.

Sure, it gets narrow in the middle down near Panama, but why should that matter? There are no roads or railways directly connecting North and South America because of the Darian Gap in southern Panama, but that is more an issue of policy and budgeting for the nation of Panama, not some insurmountable barrier.

Moreover, the Americas can’t even really make a claim to cultural differences like Europe and Asia can.

So, maybe North and South America are really one continent too?

But if we can’t let a skinny piece of land and a canal get in the way of a continent, we also have to address the fact that Eurasia is connected to Africa.

Over near the Sinai Peninsula, millions of humans migrated over that strip of land as people walked in and out of Africa. It’s all one massive, connected landmass.  So maybe, Afroeurasia should be one giant continent as well?

That would give us four continents.

But, what about Australia. Australia isn’t anywhere close in size to Afroeuroasia or the Americas. Remember our definition up above says “large enough area to be considered a continent rather than a microcontinent”

Why wouldn’t Australia just be a microcontinent, whatever that is? After all, if we count Australia, then maybe we’d need to do the same for Greenland or Madagascar?

Well, if we don’t include Australia, then we’d just have three continents. Afroeuroasia, the Americas, and Antarctica. Save for Antarctica, which was unknown at the time, this what most people thought several hundred years ago. There were two large continents which could roughly be thought of as the old world and the new world.

…and speaking of Antarctica….well, nothing. Antarctica, you’re cool. Don’t worry. You’re a continent. It’s all good.

But maybe this whole approach isn’t the right way to be looking at it. This is mostly just looking at a map.

Since the age of exploration, science has come a long way, especially geology. We know much more about how the Earth works, and we are now aware of something called plate tectonics.

Also, we know that hundreds of millions of years ago, all of the continents were once all smushed together in a supercontinent called Pangea. Maybe the answer is in collecting all of the pieces of Pangea.

This is helpful because we can weed out islands that are made out of Oceanic crust. Hawaii is a good example. Hawaii isn’t made out of continental crust. Its composition is closer to the seafloor, but it just happens to be sticking out above the surface of the ocean…..for now.

So, if we use this approach where are we at?

Eurasia is still out of luck. Europe and Asia are still one giant tectonic plate using this approach.

North and South America are not, however. In fact, there is a small plate between the two, the Caribbean plate, which includes Nicaragua, Haiti, and Puerto Rico.

Africa is once again separate, but then so is the Arabian Peninsula, which has its own tectonic plate. Likewise, most of South Asia south of the Himalayas is part of the Indian plate, which would be a continent too.

Australia is back in the club, and it’s bringing the island of New Guinea with it along with parts of New Zealand.

We can further divide Africa by splitting off the Somali plate, which takes much of East Africa with it, as well as Madagascar.

At this rate, it would be difficult to even come up with a number. Some plates might only have a tiny section of land, and it doesn’t even stick on a map as being a separate thing. You’d need to look at geologic maps, and no one does that.

We could have almost 2 dozen continents by this approach, which would be very confusing and wouldn’t really help anyone.

At this point I look to Dan Montello, a geography professor at the University of California, Santa Barbara, who noted:

“No one can say as a matter of principled fact how many continents there are, because the decisions are largely based on convention, and convention that goes in and out of fashion over time….There simply is no ‘czar’ or ‘CEO’ of continents or any other ultimate authority, so it is pretentious for anyone to claim they have the authoritative answer,”

Maybe its just easier to go back to what I said at the start of the episode.

There are seven continents.