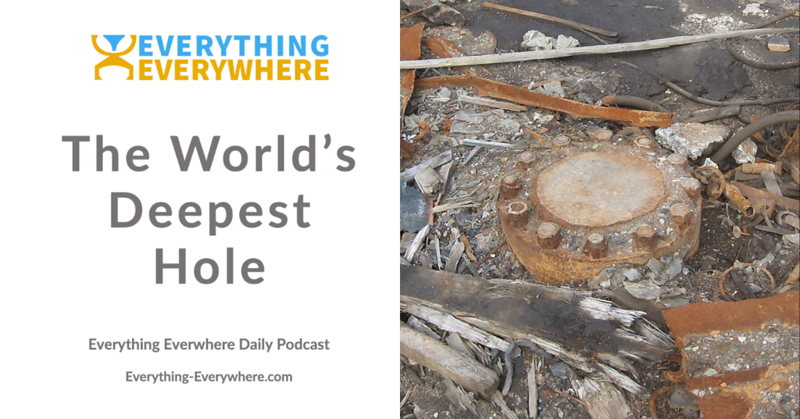 In 1970, scientists in the Soviet Union set out to drill the deepest hole in the world. They weren’t drilling for oil or gas, they were just drilling for the sake of drilling to see what they could find.

They actually found out quite a lot.

Learn about the Kola Superdeep Borehole, the deepest hole on Planet Earth, on this episode of Everything Everywhere Daily.

Before we dive down the hole of this topic, pun intended, we should do a brief review of how the earth is structured.

At the top, the part we live on is called the crust. The crust is actually quite thin in the big scheme of things. The crust makes up less than 1% of the volume of the Earth and it is only about 5 to 70 kilometers deep depending on where you are on the planet. The crust is thinner on the oceans and much thicker on land, especially under mountain ranges.

Below that is the mantle, which makes up the vast majority of the volume of the Earth, and finally in the middle is the Earth’s core.

The boundary between the crust and the mantle is called the Mohorovi?i? discontinuity or the Moho layer.

Scientists wanted to get an actual piece of that part of the Earth. We have sent space probes out tens of billions of miles, but we haven’t really gotten a glimpse of what is sitting just a few kilometers below our feet.

In the 50s and 60s, the US and the Soviet Union engaged in a very unsexy and not well-known competition to drill the deepest hole and try to be the first to reach the Earth’s moho layer.

The United States started in 1957, with Project Mohole. This was a drilling ship anchored off the coast of Mexico which tried to drill through the crust at one of its thinnest points.

They began drilling in 1961 and managed to drill to 183m below the surface of the seafloor. If that doesn’t sound like much, you need to realize that they were drilling in waters 3,600 meters deep.

As a scientific project, it failed in its attempt to reach the mantle. As an engineering project, it was actually a great success, and the techniques they learned became the basis of offshore drilling platforms.

The Soviets began their project in 1970 up in the Kola Peninsula, only a few kilometers from the Norwegian border.

Dilling can take a long time, and it especially took a long time here as they were drilling through solid granite.

In 1972 an oil well, known as Bertha Rogers, was drilled in Oklahoma which in 2 years set a record dilling down to 31,441 feet or 9,583 m. They eventually had to stop because the heat at that level prevented further drilling.

The Oklahomans basically started later than the Soviets and lapped them in just two years. But they were drilling in far easier Earth. The Soviets also weren’t just drilling, they would frequently stop to analyze the samples they were bringing to the surface.

The Soviets just kept on drilling. By 1989 they reached their maximum depth of 12,262 meters or 40,230 ft. That deeper than Mount Everest is high and deeper than the Marianas Trench.

There are actually several holes that branch off of the main hole, which is also why it took so long to drill. The main hole is only 9 inches wide or 23 centimeters wide.

So, after 20 years of drilling, what did they find?

Well, quite a lot actually.

For starters, there is a lot more water than they expected.

Geologists didn’t expect to find any water that far down. The compression of the rock is so great that they didn’t think there would be any room, and it would be pushed to the surface over time.

They found a lot of water. In fact, many geologists now think that there is as much below the seafloor than there is above it. Granted, it’s all tied up in rock and spread out over a much larger depth than the oceans, but it’s a lot.

Next, they found a lot of gasses. Gasses they didn’t expect.

They found helium, which was expected. Helium is the natural byproduct of naturally occurring radioactive decay. When uranium or thorium decays, which can take billions of years, it expels a helium atom that doesn’t chemically bind with anything.

They also found hydrogen. You almost never find hydrogen in its raw form on Earth. If it is in a gaseous form, it will rise out of the atmosphere escape.

6 kilometers, or 4 miles below the surface they found 24 different species of microscopic plankton fossils. This is something that confirms other observations made around the world that there is a staggering amount of microbial and microscopic life below the surface of the Earth. These small lifeforms have astonishingly slow metabolic rates and long lives.

From a geologic perspective, the biggest discovery was the lack of basalt. Basalt is the type of rock you find on the seafloor. Seismic reading detected a layer below the granite which is why they expected it. It turned out that the heat and pressure metamorphized the granite into a different form.

In the early 90s, the Kola Superdeep Borehole project ended due to a lack of funding when the Soviet Union fell apart. Today, the drilling facility is a ruin, and the hole itself is just covered with an iron cap. The building is literally falling apart with massive holes in the wall and roof.

In the process of drilling, the Soviets had to invent new techniques to deal with extreme depths. One of the biggest ones was how to rotate the drill bit over such extreme distances. Normally, the drill bit is at the end of a large shaft, and the shaft is rotated. However, when the shaft is several kilometers long, it becomes impossible to rotate to get enough torque to actually eat through rock.

They developed a new type of bit which rotates when high-pressure fluid is pumped down the hole, eliminating the need to rotate the entire shaft. This technique is now used all over the world on drill rigs.

Since the end of the project there have been other deep boreholes attempted, but nothing as deep Kola Borehole.

In Qatar, there was well dug which was just a hair longer, but it wasn’t as deep because it went horizontal.

In Germany, there was a hole bored down to over 9,000 meters, but there they encountered temperatures twice as hot as what was discovered in Russia.

In the future, it is entirely possible that we might create a hole that is deeper, but probably not too much deeper. The temperatures once you reach a certain level make it next to impossible to drill.

Thankfully, with what we’ve learned from deep boring projects in the past, if someone should try to break the record in the future, they should at least know the difference between their head and a hole in the ground.