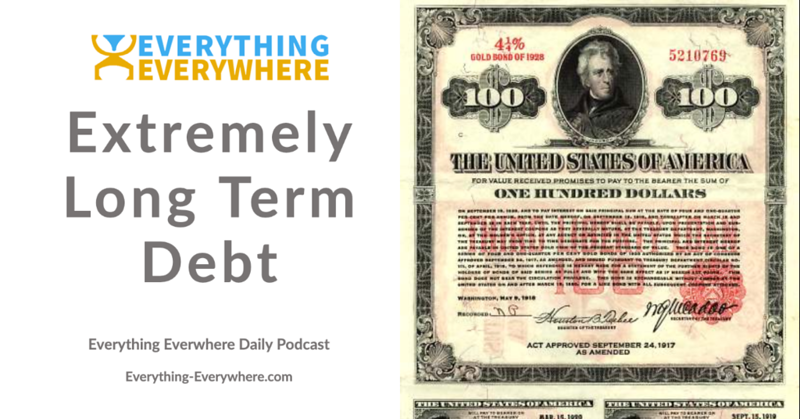 If you have ever taken out a loan, you are probably familiar with the details of taking on debt. You have an amount that is borrowed, an interest rate, and a term over which the debt is paid back.

However, sometimes, a term might be extremely long. In a few cases, the debts can be served in perpetuity.

Learn more about the extremely old debts which took forever to pay off on this episode of Everything Everywhere Daily.

If you are interested in economics, CuriosityStream has dozens of documentaries that help you learn more about the subject. They have biographies of notable economists like Adam Smith, Karl Marx, and Milton Friedman, as well as overviews of topics like the stock market crash of 1929 and the Dutch tulip bubble.

If you love to learn then start your subscription by visiting Everything-Everywhere.com/CuriosityStream or click on the link in the show notes

If you take out a mortgage on your house it will probably be for somewhere between 20-40 years. You get a set amount of money, then pay off the debt in fixed payments until the debt is gone.

However, debts that you or I might take out are fundamentally limited by one thing. Human life spans. No one would give out a 100-year mortgage to someone for a home because they won’t be around to collect it, and the person taking out the loan wouldn’t be around to pay it.

However, some things do live forever. In particular, governments.

When they take out debt to fund things like wars or infrastructure projects, they may end up paying for it for decades or even centuries after the fact.

In a previous episode, I told the story Irene Triplett, who passed away in May 2020, who received the last US Civil War pension, 155 years after the Civil War ended.

In the greater world of owing money, that case was hardly unique.

Let’s take, for example, one of the best-known cases of a government having to pay up money: Germany after WWI.

In the Treaty of Versailles, the central powers agreed to pay the allies for damages. Some of the central powers, Bulgaria, Austria, and Turkey, never really paid anything before the debt was eventually forgiven.

The Germans had to pay the bulk of it.

If you took high school history, you probably remember this issue coming up, and then it was probably never mentioned again.

In 1921, a schedule of payments was set up for Germany to pay the modern-day equivalent of $33 billion. Needless to say, if you can remember the photos of people with wheelbarrows of money during the Weimar Republic, they didn’t really pay on time.

France occupied the Ruhr Region in 1924 because they didn’t get paid, sort of acting more like a loan shark.

The whole process was a humiliation to Germany, and in no small part helped the Nazi party rise to power, and in 1932 they stopped paying altogether.

The Allies, however, never forgot. After WWII was over, and Germany was occupied, the allies were still asking “where’s my money”.

In 1953, Germany agreed to a new payment plan to pay off half the remaining debt from WWI.

Germany made its last Treaty of Versailles payment on October 3, 2010, 91 years after the payment terms were first set.

The German debt was nowhere near the worst that a nation has had to pay to another.

Unquestionably the worst was what Haiti had to pay to France, for their freedom and independence.

In 1804, the slaves in Haiti rose up and kicked out the French to become the second independent country in the western hemisphere. (that is a gross simplification of the story, but I will address this in a future episode.)

In 1825, French warships came a-knockin and they wanted money to compensate them for the lost property, including French-owned slaves. Basically, the French wanted money because the Haitians were free. In exchange, France would recognize Haiti.

Haiti, at the time, wasn’t in much of a position to negotiate. They couldn’t match the French militarily, and in 1825 the threat was very real that they could be returned to slavery if the French were to invade. They agreed to pay 150 million French Francs. While the amount was reduced a bit later to only 90 million Francs, it was still more than 5 times the Gross National Product of Haiti. An absolutely devastating burden for a poor country.

Haiti didn’t manage to pay off the debt until 1947. 122 years after they agreed to pay the French.

France has been unwilling to pay the money back to this day.

Speaking of France, they are still paying off an extremely long debt, although it isn’t nearly as burdensome as want they forced on Haiti.

Back in 1738, a man named Claude Linotte served as a financial advisor to the Duke of Bouillon. As part of his payment, the Duke agreed to pay Monsieur Linotte an annuity of 1,000 French livres per year, which was to last until “the date of death of the last survivor among the descendants of Mr. and Mrs. Linotte.”

This was a really good deal. A skilled craftsman would make about 400 per year. The value at the time was worth 10 ounces of gold or 150 ounces of silver.

Eventually, the dutchy was absorbed into France during the French Revolution and the government assumed all of the assets and the liabilities.

Well, the Linotte family was very fruitful, and they still have descendants today, 282 years after the annuity was established.

Marie and Jean Verrier of Paris are the recipients of the annuity, and they have the paperwork to prove it, however, the cost in paperwork doesn’t even make it worth their time to collect.

The British government too still has debts from the 18th century they are repaying.

Back in 1927, the British had debt floating around from a whole host of things including the South Sea Bubble panic in 1720, the Napoleonic Wars, the Crimean War, and the recently fought WWI.

The then Chancellor of the Exchequer, Winston Churchill, issued what was called the “Four Percent Consolidated Loan”, or consol bonds. What was unique about them is that they weren’t dated. The bonds would be paid in perpetuity.

In 2014, they finally took action to buy back most of those bonds as the interest rates are now less, and having something they have to pay forever is a huge liability.

Likewise, Britain only paid off their Lend-Lease loans which the United States made to them during WWII, in 2006.

However, the undisputed king of perpetual debt has to be the bonds issued in 1648 by the Lekdijk Bovendams water board in the Netherlands.

Dutch water boards are quasi-governmental authorities whose power is limited to issues of water and water levels. They can tax and spend on projects related to water control.

The bond was a bearer bond, meaning that whoever held the physical document could collect the interest payments.

The value of a bond is something that can be calculated if you know the principal, interest, and term. It is a pretty straight forward equation.

In 2003, Yale University purchased the bond for $25,000. Well beyond what the financial value of the bond was worth?

It was originally written on goatskin, the bond was so old, that the value of the document as a collector’s items surpassed its value as a financial instrument.

Also, because it was a bearer bond when interest was paid, it was written down on the actual document. They had eventually run out of space, so in 1944 a paper addendum was added to the document to keep track.

To collect the interest, Yale would have to fly to the Netherlands to collect in person. Given the value and fragile nature of the bond, they didn’t want it to leave the museum.

The water board agreed that only the paper addendum would be necessary to bring to collect, so in 2015 a representative of Yale flew to the Netherlands to collect 12 years’ worth of interest, which came to a whopping €136.20 or about US$153

Today, you seldom see perpetual bonds or even bearer bonds anymore. Most bonds are registered and paid electronically, and they have a call option whereby they can be bought back at any time.

However, the financing is handled, the fact still remains that the cost of things we buy today can have an impact decades or even centuries later.