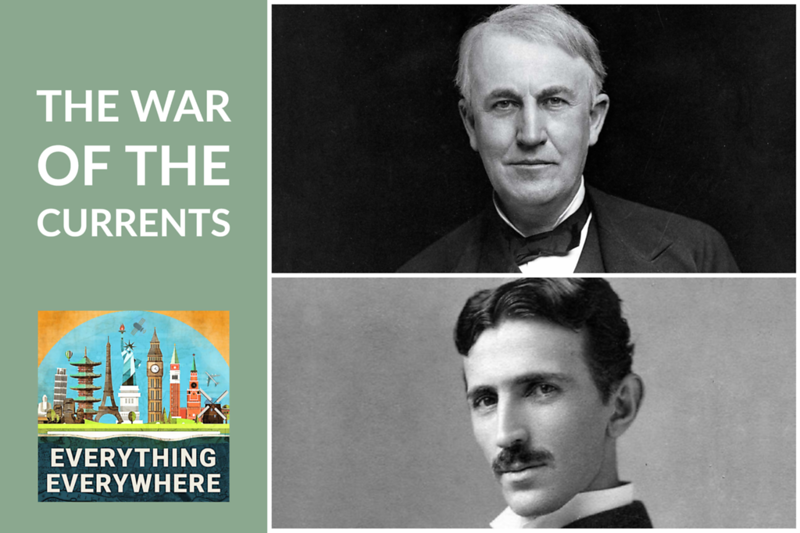 In the late 19th century, several of the world’s foremost investors engaged in a public battle for the future of electricity. The battle was fought in boardrooms and newspapers, and there was seemingly nothing that was off-limits.

Learn more about the current wars between George Westinghouse, Nikolai Tesla, and Thomas Edison, on this episode of Everything Everywhere Daily.

If you are interested in science and technology, there are a host of things you can explore in Spain.

The world’s largest astronomical telescope, the Gran Telescopio Canarias can be found on the island of La Palma in the Canary Islands. It is the location of some of the most incredible recent discoveries in astronomy, and you can visit it for yourself.

Likewise, if you are interested in volcanoes, there is probably no better place in the world at this moment than the island of La Palma where there is an active eruption as I’m speaking this.

You can also visit the incredible City of Arts and Sciences in Valencia, which serves as a  location for almost every science fiction production. It also has a great planetarium and aquarium.

You can plan your intellectual adventure in Spain by visiting Spain.info which has everything you need to plan your trip.

Standards are really important. If everyone has a standard way of doing something, it usually will make things easier for everyone. Even if the standard which is chosen isn’t the best, some standard is usually better than nothing.

We have a standard for how to communicate on the internet, how to listen to podcasts, and many other things.

In the late 19th century, it was becoming clear that electricity was going to be the next big thing and that it had the potential to revolutionize the world.

However, as electricity became more developed a problem began to arise. There were two competing methods for the transmission of electricity.

These two currents are mutually exclusive. You can do one or the other, but you can’t do them both over the same wire.

The story starts with Thomas Edison. If you remember back to my episode on the invention of the lightbulb, Edison didn’t exactly invent the lightbulb, but he did create the first workable system for electric lighting.

He also had a working electric motor that could convert electricity to physical motion which could be used in manufacturing.

Basically, everything which Edison had which used electricity used direct current. Moreover, Edison was a big advocate of direct current and he thought that it was what the future of electrification would be built upon.

One of the major benefits of DC back in the early 1880s was that there were no electric motors that could use AC power at the time. That was until a young Croatian engineer who worked for Edison by the name Nikolai Tesla pitched him on the idea of an AC electric motor in 1884.

This was actually a major breakthrough. It totally changed what type of current could be used for one of its most important applications.

However, when Tesla tried to pitch the idea to Edison, he wasn’t interested. Edison believed the future was DC and was willing to stake the future of Edison Electric on it.

Tesla thought the future belonged to AC. The main reason for this was that AC was the current produced by an electrical generator and AC could travel much further along a wire than DC could.

In fact, this was the big problem with direct current. Direct current can only travel a few miles along a wire. Edison’s early systems had generators very close to where the electricity was ultimately used.

Tesla quit working for Edison after only six months, and he went on to get several patents for devices using alternating current.

Tesla’s ideas were brilliant, but he wasn’t able to bring his inventions to market on his own. He needed an organization and he needed money.

He found that in the person of George Westinghouse. Westinghouse was an industrialist and the inventor of the railway air brake. He was also one of the foremost manufacturers of electrical components and equipment at the time and a direct competitor of Edison.

Westinghouse was a big believer in alternating power and entered the AC power business in 1885. He was very technically literate and had read the literature on AC power and newly developed transformers. Transformers can step the voltage of a current up or down.

Westinghouse realized that a system running AC could scale far better than one running DC. He could build large-scale electrical plants and transmit the electricity over long distances, as opposed to Edison’s system which required many smaller power plants transmitting electricity over shorter distances.

His AC systems were quickly expanding into areas that already had Edison systems and moreover, they were gaining in popularity.

Edison needed to fight back if his DC system was to stay relevant.

The way he fought back was in the court of public opinion. While AC power could be sent over longer distances, it had to be done at higher voltages. He tried to smear AC power as being dangerous.

Edison began just making public pronouncements about Westinghouse and AC. In 1886 he said, “Just as certain as death Westinghouse will kill a customer within six months after he puts in a system of any size, He has got a new thing and it will require a great deal of experimenting to get it working practically.”

He then began to step up his efforts to discredit DC.

In 1888, the State of New York was looking for a more humane method of execution. Edison, who had been opposed to the death penalty his whole life, suggested the use of electricity as a means of execution. In particular, execution by high voltage alternating current.

He suggested it because he wanted to associate alternating current with death. In particular, he recommended “alternating machines,’ manufactured principally in this country by Geo. Westinghouse”.

Also in 1888, an engineer by the name of Harold Brown began writing about the dangers of alternating current in the New York Post.

He wrote The only excuse for the use of the fatal alternating current is that it saves the company operating it [AC] from spending a larger sum of money for the heavier copper wires which are required by the safe incandescent systems. That is, the public must submit to constant danger from sudden death, in order that a corporation may pay a little larger dividend.

As far as we know, he had no prior association with Edison. He did this all on his own.

Then he went far beyond letter writing, however.

The spectators supposedly were horrified and begged him to stop.

During this time, Westinghouse was buying as much of the competition as he could, and anything associated with AC. It was just after the Harold Brown demonstrations he purchased the patents of Tesla for a significant sum.

Edison’s recommendation of using AC for executions still hadn’t been implemented. People with the State of New  York discounted the demonstrations done by Brown electrocuting dogs because they were so much smaller than a human.

In December of 1888, Brown rented out space at Edison’s New Jersey laboratory to put on an event for the media. There he electrocuted three calves and a horse to demonstrate the lethality of alternating current.

The state agreed to use alternating current for their executions, but Westinghouse didn’t want to sell them any generators. Edison and Brown managed to acquire some for the state anyhow.

1889 saw more panic about AC. A Western Union lineman in New York City named John Feeks died when he was electrocuted by high voltage electrical wires when he was supposed to have been working on low voltage telegraph wires.

This started what was known as the “Electric Wire Panic”. People in New York were afraid that the wires over their head were going to kill them, and newspapers were calling for executives from AC companies to be charged with manslaughter.

In August of 1890, William Kemmler became the first person to be executed via electric chair. He was given a 17-second current of 1,300 volts of alternating current electricity….but he didn’t die despite all the promises from Edison. He was then given a second jolt of 2,000 volts and finally died, and his body caught on fire.

Despite Edison finally getting his wish of an execution by alternating current, the current wars pretty much died by 1890.

In 1889 Edison lost control of Edison General Electric, and by 1890 his own subsidiaries were building AC equipment. Moreover, several years earlier, an internal memo at the Edison labs recommending switching to AC power, but it was rejected by Edison personally, who was on his DC crusade.

In the end, the economic advantages of AC power were simply overwhelming.

In 1892, Westinghouse got the bid for the World’s Fair in Chicago, and it went off without a hitch, showing to the world that AC was safe. This helped Westinghouse win the bid for the Niagara power station, which was the biggest in the world at that point. The transmission lines out of the station were built by Edison’s General Electric.

Direct current is still in use, however, particularly in computers. That brick attached to your laptop is what converts alternating current to direct current. Same with your smartphone or anything which uses a battery.

While the result of the war of the currents was sort of predestined, the world would be very different if Edison had gotten his way, we’d be living in a world with coal-fired generators every few miles.

I just wanted to give a big thank you to everyone who has listened and supported the show.

Yesterday, the podcast just notched its one-millionth download. That is the total number of individual episode downloads since the podcast began.

It is a huge milestone and one which very few podcasts ever make.

The biggest thing you can do the help the show would just be to tell a friend about it. I’m sure you know someone at work or someone you used to go to school with who is just as curious of a person as you are.

Also, once again, if you leave a