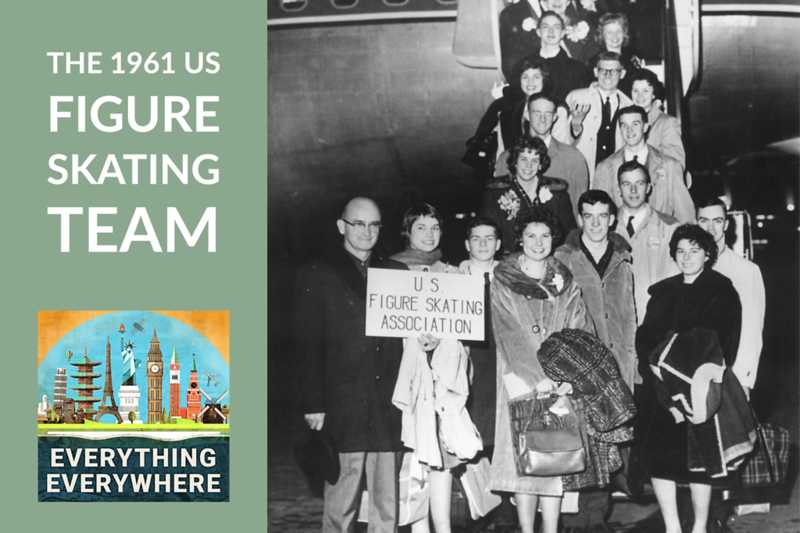 In 1961, the United States figure skating team was one of the top programs in the world. The year before at the 1960 Olympics, they took the gold in both the men’s and women’s competitions.

Then on February 15, 1961, the team suffered a terrible catastrophe. One which took the better part of a decade for the US program to recover from.

Learn more about Sabena Flight 548 and the fate of the 1961 US figure skating team, on this episode of Everything Everywhere Daily.

I wanted to give everyone an update on the upcoming Everything Everywhere Tour.

I’ve made quite a bit of progress. I’ve been talking to some suppliers, I have some preliminary pricing and we are coming closer to nailing down an itinerary.

Just a reminder, the tour is scheduled for next year in Rome. The plan is to have a 10-day tour where we explore the city at a level that few visitors ever get to see. We’ll be doing tours, every day, with top experts in history and art who will be able to get us access where few people ever get to go.

We will also be doing online meetings before the trip to give you some background on Rome and the things we’ll be seeing while we are there.

I’m going to keep the group small, and if there are a lot of people who are interested, then I’ll just make a second tour, rather than pile everyone in one group.

If you want more information when it is available, just leave your email address at everything-everywhere.com/tour

Once again that is everything-everywhere.com/tour

As I mentioned in the introduction, the US figure skating team was doing really well in the early 60s.

Given the strict amateur eligibility rules back then, most athletes in Olympic sports usually didn’t stick around after achieving some success. As they couldn’t make any money competing, they usually had to go and get a real job.

The team going into the 1961 word championships was on par with the 1960 Olympic team.

The US championships took place from January 25 to 29, 1961, in Colorado Springs.

The top three competitors in each division qualified for the world championships which were to be held a month later in Prague, starting on February 22.

The US team traveled to Prague as a group. There were 34 members of the United States contingent. 18 competitors, 6 coaches, the team manager, 2 judges, 1 referee, and 6 family members.

The team flew on Sabena Flight 548. Sabena was the Belgian national airline and operated until 2001. The airplane was a Boeing 707-329. The 707 had been put into service only 28 months before and up to that point had a perfect safety record.

The flight had 61 passengers and 11 crew on board, with the US team making up over half the passengers.

The flight left New York’s Idlewild Airport the evening before. Idlewild was the name of the airport before it was renamed JFK.

The entire flight over the Atlantic went without incident and neither of the pilots, both military veterans, reported any problems.

As the plane approached Brussels at approximately 10 am local time, it had to abort its landing because a small plane was still on the runway.

It then tried to land on an unused runway and had to abort that as well.

The plane circled the airport three times. Observers on the ground noticed that the plane appeared to be struggling to keep control. Eventually, the plane banked up before stalling out and then plunging to the ground nose-first.

It crashed about 2 miles or 3 kilometers away from the airport in a giant explosion.

Everyone on board was killed instantly.

In a single, terrible moment, the entire US figure skating program was gone. All of its top skaters and its best coaches were lost.

The skaters were all young with most of them in their late teens or early 20s. Just that week, 16-year-old US women’s champion Laurence Owen was on the cover of Sports Illustrated.

The crash was so violent that one piece of shrapnel killed a man working in a nearby farm field.

A cause for the crash was never determined, but some think it might have been a problem with the tail stabilizers.

At first, the International Skating Union declared that the competition in Prague would continue. However, after consulting with various national organizations, the decision was made the cancel the 1961 championships.

The only person who placed in the top 3 at the United States Championship who wasn’t on the plane was men’s bronze medalist Tim Brown. He couldn’t attend due to illness.

While still grieving, days after the accident the U.S. Figure Skating committee established the 1961 U.S. Figure Skating Memorial Fund. The mission of the fund was the rebuild the US figure skating program and provide funding for promising young skaters.

At the 1964 Winter Olympics in Innsbruck, Austria, the United States did respectable, considering the situation. They took bronze medals in men’s figure skating and in pairs.

The men had won every Olympic gold medal since 1948, but they wouldn’t win another until Scott Hamilton in 1984.

The return of the program was considered complete when Peggy Fleming won the gold in the women’s competition in 1968.

The Figure Skating Memorial Fund still exists today and in the 60 years since it was established, it has distributed over $15 million dollars to eventual gold medalists such as Peggy Fleming, Kristi Yamaguchi, Scott Hamilton, and pairs skaters Meryl Davis and Charlie White.

While the 1961 US Figure Skating team crash is one of the worst accidents to involve a sports team, it isn’t the only one.

In 1970, the Marshall University team was on a plane that crashed killing 37 players as well as coaching staff and boosters.

In 2016, the Brazilian soccer team Chapecoense lost 42 members of their team in a crash near Medellin, Colombia. The cause of the crash was attributed to a lack of fuel.

In 2011, 37 members of the Russian hockey team Lokomotiv Yaroslavl were killed in a crash after their flight took off.

In 1976, all 24 members of the Cuban national fencing team were killed in a terrorist bombing on a flight in Barbados.

While it is something which is seldom talked about, all major sports leagues in the United States have contingency plans in place if such an event were to happen.

Most of the league plans are similar. Basically, the commissioner in consultation with owners and the players association would determine if the team could continue the season. If they cannot, then a special draft would be instituted to get new players for the team to compete in the next year.

In Major League Baseball, it is called Rule 29. Thankfully, it has never been invoked. If it should ever happen, it would require every team to provide a list of 5 players who are currently on their active roster who would be eligible for a special draft. Each team “shall include one pitcher, one catcher, one outfielder, one infielder, and a fifth player of any position.”

In 2001, a monument was erected to the victims of the crash in Belgium, and in 2009 a documentary was released by U.S. Figure Skating which told the story of the team.

Finally, in 2011, on the 50th anniversary of the crash, the entire team was inducted into the US Figure Skating Hall of Fame.