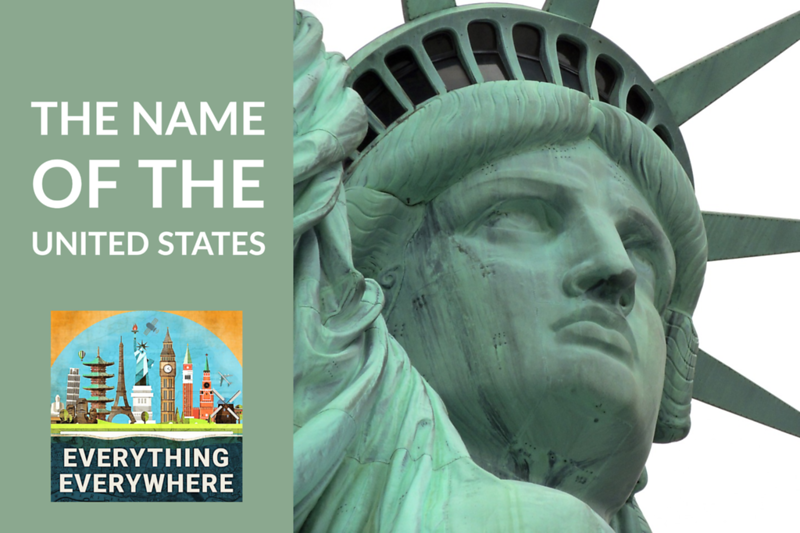 In 1776, 13 British colonies in North America declared their independence.

Believe it or not, The United States of America wasn’t everyone’s first choice.

Learn more about the name of the United States on this episode of Everything Everywhere Daily.

Before we get into the creation of the name of the country we have to take a step back and look at the origin of the word America.

As you might be aware, the word America is believed to have come from the name of an Italian navigator Amerigo Vespucci.

The first use of the word America was in 1507. German cartographer Martin Waldseemüller created a map, which was at the time, the largest map in the world. His map was the very first one that showed a unique landmass that was separate from Asia.

For 15 years after the first voyage of Columbus, most people still thought that this land was a part of Asia and that a route to India might still be possible.

Vespucci was one of the first people to postulate that this was a new world. After taking part in several voyages in the late 15th and early 16th centuries, Vespucci wrote popular books about his travels which circulated amongst the European literati. In these books, he speculated that this land was something brand new.

The Waldseemüller Map used a Latinized version of Amerigo and called it America.  In fact, in the original map, America was only applied to South America.

As the Waldseemüller Map spread in Europe, other cartographers began using the same convention for the name of this new land.

A book that accompanied the maps, which was probably written by Waldseemüller’s assistant said:

“I do not see what right any one would have to object to calling this part after Americus who discovered it and who is a man of intelligence, Amerigen, that is, the Land of Americus, or America: since both Europa and Asia got their names from women”.

There is no evidence that Amerigo Vespucci ever knew that this land was named after him before he died in 1512.

Fast forward about 250 years and some British colonies are itching to become independent.

In the early stage of the Revolutionary War, the reference was to the United Colonies.

However, the term colony carries baggage with it. A colony is subservient to some other country. Many people who sought independence insisted that they were not colonies but in fact independent nation-states.

The first written reference using “the united states of America” dates to January 2, 1776. It was in a private letter from Stephen Moylan to George Washington’s aide-de-camp Joseph Reed.  He wrote of going “with full and ample powers from the United States of America to Spain” to get Spain’s support in the war.

The first public publication of the phrase was in the Virginia Gazette newspaper in Williamsburg, Virginia, on April 6, 1776.

The term “United States of America” was also put into the first Articles of Confederation as well as the deceleration of independence.

The term itself is really more descriptive than anything else.

There are states. They are united, and they are in America.

However, it really is a mouthful. It’s 10 syllables. Most countries have a long-form and a short-form of their name.

The United States didn’t lend itself to a short, simple name.

In 1800, one Dr Samuel Mitchill of New York proposed using the name Freedonia. Actually, he was more concerned about changing the demonym of the people of the United States from American to Freedonian.

The term American didn’t sit well with some people for a couple of reasons. First, anyone in North or South American could call themselves American and not be wrong.  Second, and most important for Dr. Mitchell, is that the term American was used by the English as a pejorative.

Needless to say, Freedonia never caught on, however, it was used as the name of the fictional country in the Marx Brothers movie Duck Soup.

You might be wondering that there is a short form for the name of the United States. It’s called America!

Well, believe it or not, the use of the noun America as a short form of the United States wasn’t really a thing until the early 20th century. The first president to use it extensively was Theodore Roosevelt.

It wasn’t until the 20th century when we had songs such as America the Beautiful and God Bless America.

Columbia is a Latinized feminized form of Colombus. After the revolution, King’s College in New York changed its name to Columbia University. Likewise, when the Federal District was created, it was dubbed the District of Columbia. South Carolina named its capital city Columbia.

There was never any real support for changing the name of the country to Columbia, it was just something that was informally used.

Besides, it all became moot when a country in South America grabbed the name in the early 19th century.

Other proposed alternative names for the United States have included Vinland, Appalachia, Hesperia, and Usonia. The last one, Usonia, comes from using the initials US.

One of the other big shifts in how we refer to the country is if the term United States is singular or plural.

The start of the change from plural to singular started with the Civil War. However, despite what many people think, it wasn’t a sudden change.

An analysis of Supreme Court decisions show a slow change over time. In fact, as late as 1890, the plural usage was still predominant.

However, the United States of America is the only country in the world with the word “America” in its name.

Yet we are not the only country to use the words “United States”.

So, whether it is America, Freedonia, or Colombia, The United States of America are or is, still the country sandwiched between Canada and Mexico, regardless of what you want to call it.