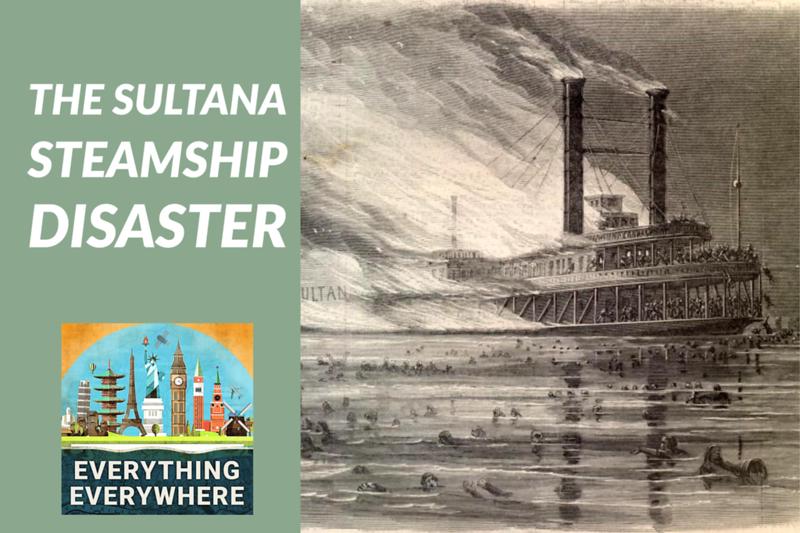 On April 27th, 1865, just weeks after the end of the American Civil War, a steamboat carrying former Union prisoners of war sailed up the Mississippi River from Vicksburg.

At 2 am, the boilers on the steamship exploded, killing 1800 people in what is still the largest maritime disaster in US history.

Learn more about the largest forgotten Sultana Steamboat Disaster on this episode of Everything Everywhere Daily.

My audiobook recommendation today is Steamboats and the Rise of the Cotton Kingdom by Robert Gudmestad.

The arrival of the first steamboat, the New Orleans, in early 1812 touched off an economic revolution in the South.

Robert Gudmestad examines the wide-ranging influence of steamboats on the southern economy. From carrying cash crops to market, to contributing to slave productivity, increasing the flexibility of labor, and connecting southerners to overlapping orbits of regional, national, and international markets, steamboats not only benefitted slaveholders and northern industries, but also affected cotton production.

On April 23, 1865, the United States was in the middle of the most dramatic month in its history.

Eight days before, on April 15, Abraham Lincoln was assassinated.

While there were still some Confederate troops in the field, for the most part, the country was transitioning from a wartime state to one of peace.

Soldiers were returning back to their homes and prisoners of war were being released.

In the town of Vicksburg, in what was considered the western front of the Civil War, a large group of Union POW’s who had been released were waiting for transportation to return home.

Many of them had spent years in such notorious facilities as Andersonville in Georgia or Cahaba in Alabama. The conditions at Andersonville were so bad, that the camp commander Captain Henry Wirz, was one of the few confederates executed for war crimes at the end of the war. This story will probably be its own episode in the future.

The Federal government had issued contracts to steamboats on the Mississippi River to transport Union soldiers up the river and back to their homes.

The officer in charge of transporting the troops in Vicksburg was Army Captain George Williams. He was concerned that many of the steamboat captains were bribing Union officers to get the lucrative passengers. The U.S. government was paying $2.75 per enlisted man and $8 per officer to each steamboat, which was far above normal passenger fares on a steamboat.

Williams made the snap decision that all of the troops waiting for transportation, over 2,000 of them, would sail on a ship called the Sultana.

The Sultana was a steamboat that was in Vicksburg to get repairs done on one of its boilers. It has a capacity of 376 passengers, which is much much less than the 2,000 people who were about to board it.

In order to deliver the 2,000 passengers, and all the money that came with it, the captain of the Sultana, J. Cass Mason, got its boiler patched rather than undergoing a more costly and lengthy repair, which wouldn’t have allowed him to take the assignment. The patch was with a thinner, inferior metal to what the boiler was made out of.

Here I need to take a small detour and explain the dangers of boiler explosions. It isn’t much of an issue anymore, but boiler explosions used to be a constant concern. Steam engines would take a substance, usually coal, and heat a mass of water into steam. The pressure of this steam would be used to do work, like turn the paddle wheel on a steamboat.

However, it was possible to have too much pressure. When the pressure built up too much the boiler could burst and result in a catastrophic explosion.

It was in this environment that the Sultana set out from Vicksburg with 2,137 souls on board. A full five and a half times more than it was rated to carry.

People were crammed everywhere on the ship. There were so many people on board, that the decks of the ship started to creak.

The ship set out traveling upriver. As it was in April, the waters on the river were high and the current was strong, which put even more stress on the steam engine.

At 2 am on the morning of April 27, just a few miles north of Memphis, the damaged boiler exploded. Within seconds the other two boilers on the ship exploded as well.

A huge part of the ship instantaly blew apart. The smokestacks collapsed. The upper decks of the ship collapsed. What wasn’t blown apart began burning in the middle of the river.

Hundreds were killed instantly in the explosion. Others killed when the upper decks of the ship collapsed upon them. More were flung into the cold spring waters of the river, and still more suffered from severe burns.

Many of the survivors who found themselves in the water were prisoners of war who spent years in confederate camps and were in a highly weakened state.

Locals heard the explosion and many came out to help. The ship had exploded in an area which had been confederate territory during most of the war.

The rescue efforts were probably the first example of post-war cooperation. Arkansas residents who would have been shooting at the men on the ship just a few weeks before were now fighting to save them.

One man, John Fogelman,  rescued 25 men off of the burning ship by lashing logs together and floating out several times to collect everyone. He had all 25 stay at his farm for several days.

Another man from the other side of the river, Franklin Hardin Barton, led rescue efforts from his side. Just a few weeks earlier, he had been tasked with patrolling the river and looking for Union activity. He probably would have shot at the Sultana a few weeks before.

All total, approximately 1,800 people died from the Sultana explosion. That a greater loss of life than the on the sinking of the Titanic, the Lusitania, the Andrea Doria, or the Edmund Fitzgerald. It was the larger marine disaster, by far, in Amerian history.

The blame for the disaster was placed on multiple shoulders. The captain ignored safety procedures to get money. The Union officers were taking bribes. There were no regulations in place to ensure the safety of steamships.  Couple all of this with the overcrowding on the ship, and the strong currents on the river, and it was a recipe for disaster.

One question that always arises about the disaster is why isn’t it better known? How is it that one of the worst disasters in American history doesn’t even get so much as a mention in most history books?

Much of it has to do with the timing of the disaster. It occurred less than two weeks after the assassination of Abraham Lincoln and the country was still in mourning. Moreover, after several years of war, with battles that saw single-day death tolls in the tens of thousands, the disaster just didn’t register with the public as it would have several years before or later. Everyone was numb to death when it happened.

For years after the explosion, the survivors held reunions. There was both a northern and a southern reunion. The last survivor of the Sultana was Private Charles M. Eldridge of the 3rd Tennessee Cavalry, who died at the age 96 1941, 76 years after the disaster.

The wreck of the Sultana was discovered in 1982, 32 feet below ground in a soybean field in Arkansas. The river had changed course so much over time that it was actually two miles from the river when it was found.

Today, there are a few monuments and memorials scattered about the country in places where most of the victims were from. In 2015, on the 150th anniversary of the event, a museum was opened in Marion, Arkansas, the closest city to where the wreck was found.

One wall of the museum contains the names of the over 2,000 soldiers, passengers, and crew who were on the boat that day.