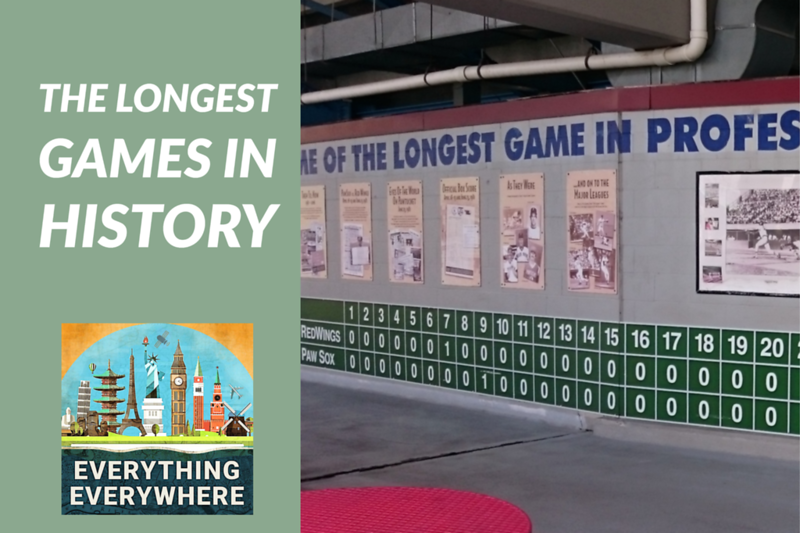 Sometimes you might sit down to watch a sporting match and it is over before you know it. However, there are some games that seem to take forever.

A rare few games last an extraordinarily long time, as no one can seem to win.

Learn more about the longest games in history, in almost every sport, on this episode of Everything Everywhere Daily.

Long athletic competitions are always a result of one thing: the inability of the teams or players to beat each other. Sometimes, competitors are so evenly matched, at least for that day, that things just keep going on forever and a resolution can’t be reached.

Let’s start our journey into the land of long games with two sports that do not lend themselves to long games: Soccer and hockey.

Both sports have two features that make long games unlikely: they are played with a clock, and they both allow for ties. The clock means there is a theoretical limit to how long a game can be played, and the allowance of ties means that the game can end without a resolution.

The longest association football match (aka soccer in the colonies) occurred in 1946 in England between Stockport County and Doncaster Rovers in a Division Three championship game. The match took three hours and 23 minutes to complete.

The game was a replay of an earlier game between the two teams which ended in a 2-2 tie.

In the marathon game, the score was also tied 2-2. They played the full 90 minutes, plus an extra 30 minutes without a resolution. After 120 minutes, they then went into a golden goal period, where the next team to score would win……but no one scored.

At the 173rd minute, Stockport scored a goal, but it was disallowed, making the match continue. The game was eventually called after 203 minutes.

Yet another replay of the game was held and this time Doncaster won 4-0.

Today’s rules would not allow for such a match to take place, so their record is safe.

Over in hockey, the longest game belongs to a 1936 Stanley Cup semi-final between the Detroit Red Wings and the Montreal Maroons. (You’ll notice that many of the games I mention are championship or playoff game because these are the one time you can’t have tie).

The game went into a record six overtimes and took 116:30 to finish, the equivalent of almost three games in total time.  The game was scoreless after regulation and through all the overtimes.

The game finally ended at 2:25 in the morning by Mud Bruneteau, to give Detroit a 1-0 victory.

American football is similar to hockey and soccer, with the only exception being that ties are technically allowed, but are highly frowned upon.

The longest NFL game took place on December 25, 1971, in a playoff game between the Miami Dolphins and the Kansas City Chiefs. With a total of 82 minutes, 40 seconds of game clock time, the rules at the time stipulated that the first team to score any points in overtime was the winner.

The game ended 7:40 into the second overtime when Miami kicked a 37-yard field goal.

The longest football game in college history was a 2003 game between Arkansas and Kentucky. The game went to seven overtime periods before a winner was resolved. The NCAA rules stipulated that in each overtime, both teams got a chance to score from the 25-yard line.

In the final overtime, Arkansas scored eight and held off Kentucky to win the game 71-63. The game lasted a total of 4 hours and 56 minutes.

In high school, there was a 12 overtime game in Texas in 2010 between Jacksonville and Nacogdoches. Jacksonville won 84-81 and the game took 5 and a half hours to complete.

Basketball has a clock, but they never have tie games.

The longest NBA game took place on January 6, 1951, between the Indianapolis Olympians and the Rochester Royals. The game is the only game in NBA history to have gone to 6 overtimes.

Indianapolis won 75 to 73, which is remarkable, because it is possible for modern NBA teams to almost get that many points in a single half, let alone four quarters and six overtimes worth of play.

In 2009 a Connecticut vs. Syracuse men’s basketball game in the Big East Tournament quarterfinals was the longest in NCAA history. It too went 6 overtimes with Syracuse winning 127 to 117.

In high school, we get even more extreme case. On February 29, 1964, in North Carolina, Boone Trail High School held off Angier High School to win 54-52….after thirteen overtimes! The score was tied 44-44 after regulation and the teams basically didn’t score at all and held the ball for most of the overtime periods.

As we move away from games with a clock, there is no theoretical maximum for the lengths of a game.

Baseball games can be notoriously long.

The longest major league baseball game in terms of innings took place on May 1, 1920, between the Brooklyn Robins and the Boston Braves (the Dodgers used to be called the Robins, and the Braves were the same franchise which is in Atlanta today).

They went 26 innings and was called due to darkness. The score was tied 1 to 1 and it was one of the very rare baseball games to end in a tie.  The game, however, only took three hours and 50 minutes to complete.

A May 8, 1984 game between the  Chicago White Sox and the  Milwaukee Brewers went 25 innings and had to be completed over two days. The total game time was eight hours and six minutes. The White Sox won 7 to 6.

However, no baseball game, professional or amateur can compare to the granddaddy of all long baseball games which began on April 18, 1981, between the Triple-A Pawtucket Red Sox and the Rochester Red Wings.

It went 33 innings and lasted 8 hours and 25 minutes over two days. The game set almost every record for the most of anything in one game, including outs, strikeouts, and at-bats. The game was stopped after 32 innings and continued 4 days later on April 25. The continued game was over in 1 inning and 18 minutes.

After the game, both teams signed a baseball that went to the Hall of Fame, and they even held a 25 year anniversary of the game in 2006.

Cricket fans might be listening to all of this and wondering what the fuss is. An average cricket test match can last three to five days.

However, even cricket matches can have unusually long lengths. In 1939, South Africa and England played a test match in Durban which lasted 12 days. Started on March 3 it ended on March 14, and there was action on 9 of the 12 days.

Individual sports also have had some legendary long matches. There are two of which, that really stand out.

The first is the 2010 first round Wimbledon match between American John Isner Frenchman Nicolas Mahut.

The match lasted 11 hours and 5 minutes and demolished the record of the previously longest tennis match by almost 4 hours. The entire match, all 11 hours of it, is available on YouTube and it has almost half a million views.

The score went so high that the scoreboard couldn’t display the results and IBM had to send in a team to fix it so it would display properly.

After the match, both men were presented with a special crystal bowl by the All England Tennis club for their historic performance.

McEnroe speculated that the match might have shortened both men’s careers by six-months.

The absolutely longest competition I could find in any competitive activity occurred in the world of chess.

The longest single game of competitive chess took place in 1989 in Belgrad between Goran Arsovi? and Grandmaster Predrag Nikoli?. The game took 269 moves and took 20 hours and 15 minutes to end in a draw.

The rules of the championship were such that the first player to win six games would be the champion.

Karpov was up 4-0 after 9 games and looked like he would cruise to victory.

However, Kasparov was stubborn and he dug in. They played 17 consecutive draws. Karpov won game 27, and then they four more draws before Kasparov won his first game.

This was followed by 14 more draws and then Kasparov winning games 47 and 48.

After 48 games and 5 months of play, the match was called off by the president of the World Chess Federation to protect the health of the players. Both of the players, however, wanted to continue.

It was the first and only time that a world championship to be abandoned without a winner.

The match was replayed in 1985, but this time it was the best of 24 matches, and in the event of a tie, the champion Karpov would retain his title.

Most of the competitions I’ve mentioned have their records secure because once they happened, rules were changed to make sure that they were never repeated.

If you ever happen to be present as such a historically long game, remember to save some game souvenirs because it is unlike that it will ever be repeated.