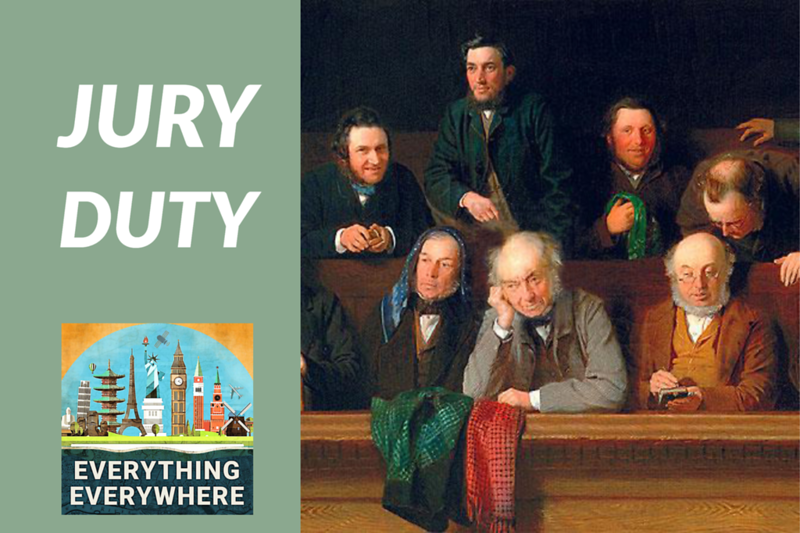 Every so often, adults may be asked to perform a civic duty by sitting on a jury. Usually, the commitment might be nothing more than a few hours or a few days. Occasionally, some juries might get a case that lasts years.

Why do we have juries, and where did this notion come from? Do most countries have juries? What does “a jury of your peers” really mean?

Learn more about the history of the jury system on this episode of Everything Everywhere Daily.

My audiobook recommendation is Terror to the Wicked: America’s First Trial by Jury That Ended a War and Helped to Form a Nation by Tobey Pearl.

The book tells the story of America’s first murder trial which took place in 1638 in the Plymouth Colony, in what is today Rhode Island. It covers the murder of a native Nipmuc man, the white fugitive which killed him to steal pelts, and the jury which was assembled to meet out justice.

The idea of a jury is not one which was passed down from the ancients as are many parts of western civilization.

The ancient Greeks did have something akin to a jury, but it was more of a form of arbitration, not an application of the law.

The Romans absolutely did not have anything resembling a jury, nor did any of the institutions of the church which followed in its wake.

The modern notion of a jury stems from 13th century England and the Magna Carta.

It is in this document, specifically section 39, where the modern jury comes from. It says:

NO Freeman shall be taken or imprisoned, or be disseised of his Freehold, or Liberties, or free Customs, or be outlawed, or exiled, or any other wise destroyed; nor will We not pass upon him, nor condemn him, but by lawful judgment of his Peers, or by the Law of the land.

This is where the idea of a “jury of your peers” comes from.

The original definition of the word, and the way it is still used in the UK, a peer is someone in the aristocracy who holds a hereditary title. The peerage is the body of all the dukes, barons, earls, marquesses, and viscounts which make up the nobility, and its members are peers.

The Magna Carta wasn’t written for normal people. It was explicitly a document that protected the nobility, aka the peerage, from the king.

So, what does it mean in a modern context?

Well, for starters, there is nothing about a jury of one’s peers anywhere in the US constitution. The 6th amendment only says that you have a right to an impartial jury.

That being said, the idea of a jury of your peers is still one which most people and most legal scholars would embrace. In a modern context, a jury of your peers simply means a jury made up of a cross-section of the community. If that sounds a bit vague, that’s because it is.

What it does not mean is that you have a right to be tried by people who in the same income bracket, occupation, race, sex, or age as yourself.

Since the modern jury came from England, how common is the jury system around the world? The answer, surprisingly, is not as widespread as you might think.

Countries like Germany and France tend to use a panel of judges for serious crimes, and in Germany, they can use lay judges.

In India, there is no real jury system at all.

In Sweden, they are usually only used for libel cases.

In the UK, Canada, and Australia you will find juries for serious criminal cases such as murder, but not necessarily for lesser crimes.

In the United States, juries are required for all criminal cases and are used for almost all major civil cases as well. The only exception is things such as traffic tickets and small claims court.

There are actually several different types of juries. When we normally talk about juries, we are usually talking about what is known as a “petit jury”. These are juries that determine guilt or innocence.

The other types of legal juries are grand juries and coroner juries.

Grand juries are juries that only make indictments. They are presented with evidence to determine if a case should move forward. It was designed as a check against prosecutors.

The grand jury system has all but disappeared all over the world except in two countries: The United States and Liberia…..which oddly enough are the last two countries in the world which don’t use the metric system.

A grand jury usually has 23 people on it, as opposed to the 12 which sit on a petit jury, which is why they have the names they have.

Grand juries in the United States are guaranteed by the 5th amendment for all federal cases and are used in about half of the states.

Unlike petit juries, grand jury proceedings are secret and there is no judge present. A prosecutor presents their case, but the defendant may not be present or even aware of the proceedings.

Most times a cause of death will be given by a coroner in a report, and it is usually a rather straightforward clinical document. However, there are times when a coroner might want to call a jury if there is a question of bias or conflict of interest, or if they wish to provide the public assurance in high profile cases.

The petit jury is what most people are familiar with.

In the United States, the jury selection system will differ slightly by state, but there are common features which they all share.

Jurors are selected at random from publicly available lists such as voter registration rolls and driver licenses.

A jury will usually be selected from a larger pool. To get 12 people, there might be several dozen people in the initial pool. Attorneys from each side can strike potential jurors for any number of reasons if they think that person might not be impartial or would hurt their chances.

There are two types of objects an attorney can make when selecting a jury.

The first is a challenge for cause. An attorney can make an almost unlimited number of them if they can show there is a why a juror might not be impartial. Knowing one of the parties in a case would be such a reason.

The second is called a Peremptory Challenge. Each side is given a certain amount of these and they can be used for any reason other than race or gender. In other words, you couldn’t eliminate potential jurors just to create a jury which is all one race or sex. Attorneys could strick jurors just because they look mean or kind, or because of how they dress.

Juries in the US mostly only deal with determining guilt or innocence. It used to be that they would also be involved with sentencing, but recent mandatory sentencing laws have taken this out of the hands of juries in recent years in many states.

Most states require a jury decision to be unanimous. If a jury cannot reach a unanimous verdict, then you have a hung jury and the result is a mistrial, and there will be a new trial with a new jury.

The average length of a jury deliberation is 114 minutes.

In 2004 in New Zealand, a jury took exactly 1 minute to acquit someone of cultivating marijuana.

There have been jury deliberations that have gone on for months. These usually are very complex cases that involve multiple counts where verdicts have to be rendered individually. A jury in a 1992 case in Long Beach, California took 4.5 months to render a verdict.

I should end by talking about the powers of juries and in particular the ides of jury nullification. This is something that gets a lot of discussion in certain corners of the internet and is pretty much never discussed in legal circles and especially not in courtrooms.

Jury nullification isn’t a law per se, but rather it logically stems from the fact that juries can’t be punished for arriving at a conclusion, and that a defendant can’t be tried again for the same crime.

This is mostly a theoretical issue, but there were times in US history when juries refused to convict in cases where they thought the laws were unjust. In particular, cases involving the Fugitive Slave Act in the north before the Civil War, during Prohibition, and in some cases involving drug offenses.

A case explicitly dealing with jury nullification hasn’t come to the Supreme Court, so as of right now it is an opened ended question.

However, if you were to share an opinion on jury nullification, or even express that you are aware of it during a jury selection process, or perhaps even make a podcast about the subject, you might not get selected to sit on a jury.

Regardless if you should ever get called for jury duty or if you ever are selected, the jury process is an integral part of the legal system in many countries, and one of the things which ensure everyone’s freedoms.