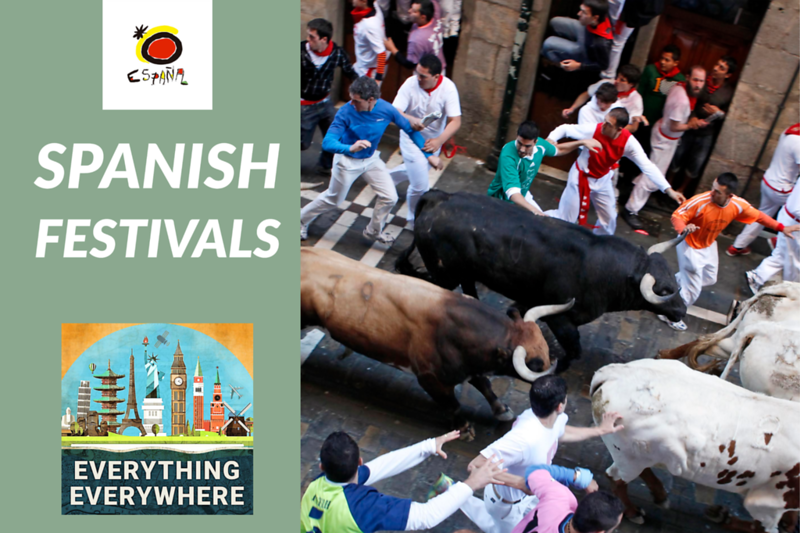 Many communities around the world hold local festivals. They might have some food stalls, a stage for musical acts, and some rides for the kids.

But in Spain, they do things differently. Really different.

Learn more about the unique Spanish festivals which aren’t like those anywhere else in the world, on this episode of Everything Everywhere Daily.

The festivals in Spain which I’m outlining in this episode aren’t just cultural curiosities you can learn about online, they are things you can go and experience yourself.

Regardless if the festival held in a small community like Catoria or a large city like Valencia, all of these festivals can be experienced by anyone.

You can also find a festival somewhere in Spain for almost any month of the year.

You can start researching your dream trip to Spain today by visiting Spain.info where you can get everything you need to know to plan your Spanish festival experience.

I’ll start this tour of Spanish festivals with the one that most of you will probably be familiar with. The Running of the Bulls or the Festival of San Fermin, in Pamplona, held July 7th through the 14th.

This festival was made famous by Ernest Hemmingway in his book The Sun Also Rises, which helped make it one of the most popular festivals in Spain. It attracts about a million visitors per year.

The festival is actually a week-long celebration consisting of fireworks and processions.

The part which makes it famous, the running of the bulls, takes place every day in the morning, and it actually is quite short. It starts at 8 am every morning of the festival. Several hundred runners will line up in front of six bulls and six steers. A firecracker will announce the start of the run, and everyone will run 825 meters through narrow streets to the bullring. The running of the bulls takes approximately three minutes.

The runners will pray to Saint Fermin at the start of the run, which is good because almost every year someone is injured. In the last 100 years, 15 people have been killed.

If you are looking for a festival which is a bit less dangerous, I’d suggest the La Tomatina Festival which is held in the town of Buñol outside of Valencia, in late August.

The festival is literally a giant tomato fight. It lasts for one hour and during that hour, 145,000 kilograms of tomatoes are thrown. The festival is now so popular that to take part in the tomato fight, you now have to buy a ticket.

The tradition started in 1945 when there was a giant head parade when one of the heads in the parade fell off. The participant got angry and starting knocking over everything around him, including a vegetable cart, which was when the tomato fight ensued.

The tradition was initially banned for several years until the city relented and made it official.

Not far from La Tomatina in the city of Valencia you can find the Fallas Festival. Every March 1st through the 19th, the people of Valencia create giant paper mache sculptures, up to 20 feet high. The sculptures are sort of like parade floats and they usually involve some sort of social satire, with sculptures of politicians, celebrities, or sometimes just mythical creatures.

Every day at 2 pm there is a big fireworks display in the town square, which is mostly just a bunch of really loud firecrackers.

The paper mache sculptures are judged and a winner is declared. On the last night of the festival, all of the sculptures are burned down all over town, usually in wide intersections where there are no buildings close by. There are also firefighters everywhere just in case, but I suggest you

Sticking with the fire theme, there are celebrations all over Spain on June 23 for La Noche de San Juan or St. John’s Eve. These festivities are often held on beaches and one of the largest celebrations is held in the city of Alicante.

Bonfires will be lit on the beach at midnight and there will be lots of drinking. Once the fires have died down, the tradition is to jump over the fire nine times for good luck. If you really want to keep with tradition, you can show “meigas fora” each time you jump, which means, “witches out”

Speaking of jumping, over on the island of Menorca, they have their own unique celebration for the feast of San Juan. In the town of Ciutadella de Menorca, the main part of the festivities is the Caragol del Born where riders will take show horses into the middle of large crowd. The show horses are all jet black as is the dress of the riders. Right in the middle of the crowds, they will have their horses rear up on their hind legs and do this over and over.

Saying on the theme of jumping, we can’t forget El Colacho which takes place on the feast of Corpus Christi in June, in Castrillo de Murcia. During the festival, babies born in the last 12 months will be placed on the street on mattresses, and a man dressed in red and yellow will go around and jump over the babies.

The tradition is supposed to protect the children against evil. The Catholic church is trying to distance themselves from the practice, but it still seems pretty popular with the people in town.

In the town of Haro, in the center of the La Rioja wine region, they use the feast of St Peter to reenact an event that goes back centuries: La Batalla del Vino, or the wine fight.

Original something which took place between two neighboring towns, it is now an annual celebration involving tens of thousands of liters of wine, and now super soakers. After several hours of getting drenched in wine, people go to change clothes, which shall be forever colored purple, and returned to the middle of the town to, you guessed it, drink wine.

If having all your clothes permanently stained with wine isn’t your thing, then perhaps you’d prefer something more goth. In which case, the Cascamorras festival might be for you. It takes place in early September, in the small towns of Baza and Guadix in Andalusia. The celebration is a reenactment of something which took place over 500 years ago when the two cities fought over a statue of the Virgin Mary.

Today they drench themselves in black paint and olive oil and chase someone known as the Cascamorras over a 6-kilometer course. It looks like people having a party in the middle of an oil spill.

If neither black nor purple is your color, then maybe white might be more your taste. In that case, you need to head to the small town of Ibi where on December 28th each year they engage in a giant flour fight.

December 28th is Spain’s equivalent of April Fools’ day. In Ibi, a group will dress up in military-style uniforms and stage a mock coup d’état. They will go around creating crazy laws and try to collect money from lawbreakers, with the money going to charity. Another group dresses up to fight the coup, and the two sides meet in the middle of the town square to engage in a battle of eggs and flour.

If you need a rest, perhaps you should consider The Fiesta de Santa Marta de Ribarteme or the Near-Death Experience festival. This is held on July 29th of each year in the town of Las Nieves near the Portuguese border in Galicia.

The center of the festivities consists of people who narrowly missed death. They are carried in open coffins by their family members to the local church for a Mass of thanksgiving. Afterward, there is a procession to the local cemetery and back….and then they have a party in the middle of town.

In the town of Catoira in Galicia on the north coast of Spain, every year they have a Viking Festival which celebrates the ancient defense of the city from Viking raiders. Groups will dress up as Vikings and town defenders and the Vikings will land in longboats. They will then have a mock battle on the water’s edge, with a large amount of drinking. Have you noticed there’s a lot of drinking at these events?

The small town of Berchules, Granada celebrates the new year every year…..in August. On December 31, 1994, the town experienced a power outage and they were unable to celebrate the new year. So, they moved the festivities to the first weekend in August, and have been doing that ever since. Over 10,000 people now show up….and there is much drinking.

Finally, I’ll end with the Jarramplas Festival which takes place in the town of Piornal in Extremadura.

Jarramplas is a devil-like character who dresses up in bright clothes, two horns, and a mask. He then goes through town where he is pelted by turnips. He has to wear body armor under the costume because turnips can really hurt.

Being Jarramplas for the year is a huge honor and parents sign up their boys right after birth to be considered. Locals will board up their doors and windows before the celebration so they are not broken by flying turnips.

I really only scratched the surface of the unique festivals which can be found in Spain. There is the snail festival in Lleida, the burying of the sardine to end carnival, the extremely noisy drum festival in San Sebastian, and the extremely haunting Easter celebrations in Seville.

So whether you are interested in jumping over fires or babies, throwing tomatoes or turnips, or being soaked in wine or olive oil, there is a quirky, festival, probably based on centuries of tradition, somewhere in Spain for you.