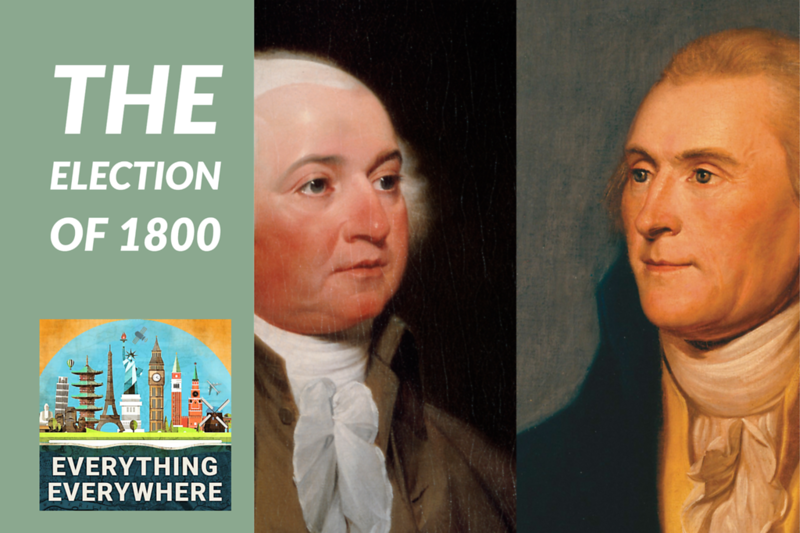 I’ve done several episodes on close and interesting US presidential elections throughout history. Mainly they were to put current events into perspective, so you can realize that the controversies of today are really not all that new.

However, there was one election that might be considered the closest and most interesting in history, but the lessons for today are much less, simply because they changed the rules after the election, and there was never another one like it again.

So in that spirit, learn more about the Presidential Election of 1800 on this episode of Everything Everywhere Daily.

There were a whole bunch of things about the election of 1800 which were unique.

The biggest of which is it was the first and only time in US history that a sitting president ran against the sitting vice-president.

Incumbent President John Adams was the nominee of the Federalist Party and his opponent was the sitting Vice-President Thomas Jefferson of the Democratic-Republican Party.

The reason why we had a situation where the President and Vice-President were members of different political parties has to do with a quirk with how the constitution was originally written.

Every elector received two votes and there wasn’t a specific vote for Vice-President. So in 1796, you wound up with two founding fathers as president and vice-president, and they didn’t get along at all.

Because everyone recognized that this was a problem, in 1800 the parties offered up separate candidates for both President and Vice-President.

If that sounds like a giant kluge to get around the rules, you are right, and as we’ll see, it didn’t really work.

The election itself was close by straightforward.

Elections back then were not like they are now. They were spread out from April to October, and there really wasn’t much of a popular vote. Almost all of the states selected their electors via the state legislatures.

News, which traveled slowly back in 1800, started to dribble in about which states voted for who. Going into October, Adams and Jefferson were tied 63 to 63 with only South Carolina remaining.

In the end, with several states splitting their electors, the final tally was Jefferson 73 and Adams 65.

And this is where the problems stated.

As I mentioned before, there wasn’t a special vote for vice-president. The vice-president was just whoever got the second most votes.

The Federalist stuck to the plan with one person voting for John Jay instead of Charles Pickney, making sure that Adams would get one more vote.

The Democratic-Republicans screwed up and gave both of their candidates an equal number of votes. Either they forgot to have one elector change their vote, or they never planned it properly to begin with.

Either way, it meant that the results of the electoral college were a tie and there was no winner.

In the event that no one received a majority in the electoral college, it was then sent to the House of Representatives who would decide. However, it wasn’t as simple as a vote of the house members.

You’d think that this would be a formality. The Democratic-Republic party already picked Thomas Jefferson to be their presidential nominee, and this tie electoral vote was really just an accident, so this should have been simple to rectify.

As it became clear what was happening, many Democratic-Republicans encouraged Burr to step aside. However, not only did he refuse to do so, but he openly entertained the idea of becoming president himself. In fact, there were rumors floating around of Burr offering political appointments to Federalists who would vote for him in the house.

The election in the House took place in February of 1801, and the old congress was still sitting, and this congress was controlled by the Federalists, who controlled the delegation of 8 of the states.

The Federalists hated Jefferson, so they tried to block Jefferson and get Burr elected. Also, if no one could get a majority, then the sitting Secretary of State John Marshall would be the acting president until someone could be chosen.

There were 35 votes in total through February 17th, with the results exactly the same each time.

If you’ve seen the musical Hamilton, you probably know what happened next.

Alexander Hamilton, former Secretary of the Treasury and staunch Federalist started a letter-writing campaign on behalf of his long-time antagonist Thomas Jefferson.

Hamilton didn’t like Jefferson and they butted heads all the time in the Washington Administration. However, he really had zero respect for Aaron Burr. He viewed Jefferson as the lesser of the two evils.

As Linn Manual-Miranda put it in Hamilton, “Jefferson has beliefs, Burr has none.”

On the 36th ballot, Hamilton managed to swing Maryland and Vermont over to Jefferson. Delaware and South Carolina went from Burr to being split. That made the final results Jefferson 10, Burr 4, with 2 split state delegations.

Jefferson won, but he was stuck with the guy who arguably is the worst Vice-President in American history.

After the election was over, they passed the 12th amendment in time for the election of 1804. The President and Vice-President were elected separately and the problem of 1800 never happened again.

Not surprisingly Jefferson abandoned Burr as a running mate in 1804.

Burr pretty much earned it. While he was still Vice-President he killed Hamilton in a duel.

After he left office, he was tried for treason, with the Jefferson administration leading the charge against him. Jefferson, in one of the first examples of executive privilege, refused to testify on Burr’s behalf.

The election of 1800 is an interesting chapter in American history, but there isn’t really much we can take away from it to apply to today. The 12th Amendment ensured that you’ll probably never see a sitting president running against a sitting vice-president, and you’ll certainly never see two running mates running against each other.