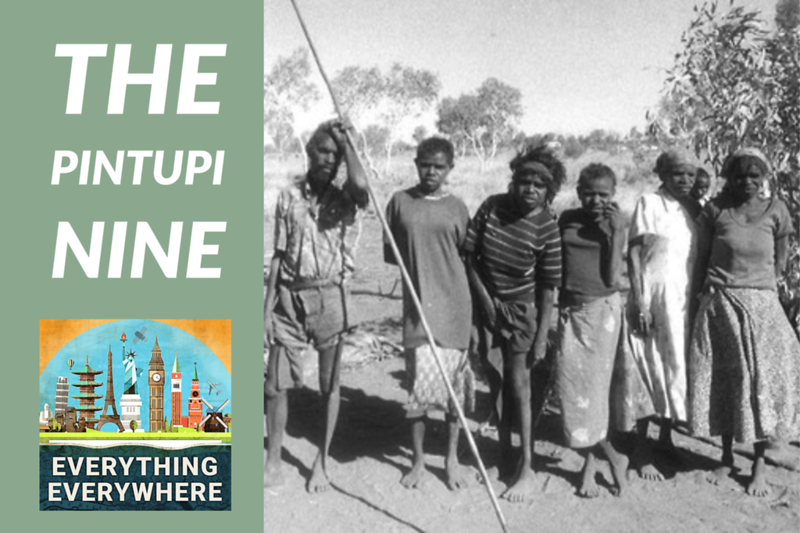 In October 1984, nine members of the Pintupi Tribe in Western Australia met some long lost relatives they hadn’t seen in years. The relatives invited the nine people to come and live with them in their community in Kiwirrkura.

The significance of this event is that those nine people, two women with four boys and three girls, were the last aboriginal people in Australia to have contact with the outside world.

Up until 1984, they had lived their lives the same as their ancestors had for tens of thousands of years.

Learn more about the Pintupi Nine on this episode of Everything Everywhere Daily.

Today’s audiobook recommendation is Girt: The Unauthorised History of Australia written and narrated by David Hunt.

Girt. No word could better capture the essence of Australia….

In this hilarious history, David Hunt reveals the truth of Australia’s past, from megafauna to Macquarie – the cock-ups and curiosities, the forgotten eccentrics and Eureka moments that have made them who they are.

Girt introduces forgotten heroes like Mary McLoghlin, transported for the crime of “felony of sock”, and Trim the cat, who beat a French monkey to become the first animal to circumnavigate Australia.

The story of the Pintupi Nine starts back in the 1950s when the British military began doing blue streak missile tests in the remote desert of Western Australia. As a safety precaution, they rounded up all of the aboriginal people who were living in the region, mostly from the Pintupi tribe, and brought them to live in settlements.

They managed to get everyone, except for one family.

The people who were brought in to live in the settlements had been living a nomadic existence similar to how their ancestors had lived for thousands of years.

The people who were left didn’t know where everyone went. Suddenly everyone they knew was gone, and they had to keep on living.

Their existence was centered around food. They would spend their days going from watering hole to watering hole hunting for goanna lizards, and kangaroo. They would eat grubs, damper seeds, and bush onions. Basically, anything and everything they could find to stay alive.

However, they weren’t in survival mode per se. They were just living. Living the same life their people had done for thousands of years.

They did however see signs.

They would occasionally see an airplane flying overhead, and they had no idea what it was. They would climb trees to avoid them as they thought they were demons.

They once came across the wreckage from a plane crash, and it was a mystery to them. One of them found a rope from the wreckage and tied it around their waist to hold the goanna lizards they hunted.

Eventually, the father of the family and the husband of the two women died, and life for the family became more difficult. They were down to 9 people and seven of them weren’t adults.

Their relatives who were taken to settlements back in the 50s knew that they had family out there in the bush. They made an effort to try to find them.

“We had just speared a kangaroo. We could smell the feces of other humans in the air” – they were probably a couple of kilometres away – “and we saw smoke in the distance.

“We moved closer and stood on a rock and could see people camping down below. So I began to move closer to their camp. I ran towards where they were standing. Then I snuck over closer. I coughed. The people heard me. It looked like they were scared. They became frantic, running back and forth.

“This is my grandfather’s land,” Warlimpirrnga said. One of the men started filling a billycan with water for them. “When he did, we thought, we won’t spear him,”  “They were so scared. They were really scared of us, scared out of their wits.”

After this initial bad first contact, the campers went back to their settlement of Kiwirrkurra to tell everyone what they had seen. They found naked men out in the bush. Others realized who they had met. It was their long lost family members.

They gathered some of the closest relatives and went back out to find them.  For three days they tracked them through the bush.

When they finally found them, there was fear and confusion. Some of the nine were grabbed and placed in a car. They later said that they didn’t understand how the trees went by so far, as they had never gone faster than they could run before.

The fear and confusion soon disappeared as their relatives told them about the settlement they lived in: Kiwirrkurra. They told them they had water which came out of pipes, and that there was plenty of food.

The nine agreed to join them in the settlement. The truth was, there just wasn’t enough of them anymore and survival was becoming difficult.

They agreed to stay in the settlement with the rest of the Pintupi people.

There they met a man named Charlie McMahon. He was there to help the people in Kiwirrkurra. He was also the only white person in the settlement and the first white person that the nine had ever seen.

Some of them were terrified of the white-skinned people. They thought they were ghosts that had come to eat them.

A medical examination performed on the nine showed them to be in perfect physical health without an ounce of fat.

Eventually, their fears dissipated and they come to understand their new life. One of the new things which they went out of their way to comment on was sugar. One of the younger women noted:

In fact, one of their relatives suggested giving them sugar as means to make them stay, and it worked.

None of them regretted the decision as life in a settlement is much easier, but there have been some downsides.

They, like so many other aboriginal people, have succumbed to what they call “what fella” diseases such as diabetes, obesity, alcoholism, and substance abuse.

Since their contact in 1984, one of the mothers has passed away. One brother, Payirti, returned back to the bush. He couldn’t handle all the interpersonal drama of living with other people.

All of the rest of the children are now in their 50s. Three of them have become well-known artists.

Even though they live in a community, they still practice the skills they used when they lived in the outback. As one of the last practitioners of the ancient ways, they have passed along their knowledge to new generations, and researchers who wanted to know more about how they lived before they joined the settlement.

While they no longer hunt and gather for a living, they still have strong ties to the land. As one of the sisters Yukultji, put it best:

[This] is my country, my home, my dreamtime stories, my birthplace,” she says. “This is my place, my country. I grew up around Lake Mackay. This is where I was born.”