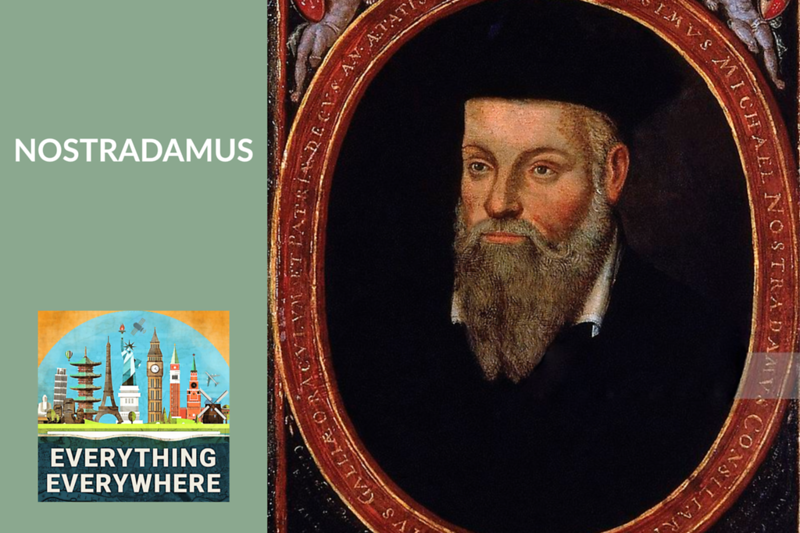 In 1555, a French physician and astrologer named Michel de Nostredame published a book of poems titled Les Prophéties. Ever since people have been trying to interpret world events through his writings.

Was Nostradamus a prophet? Was he a fraud? Or are people just reading way too much into a bunch of vague, random statements?

Learn more about Nostradamus and how his writings have been interpreted, on this episode of Everything Everywhere Daily.

The global pandemic has obviously had a huge impact on travel over the last year and a half.

Even though things are now opening open, every country has different rules and regulations for every other country, which can make traveling really confusing.

That’s why Spain has created a portal to help you know what you need to do in order to visit Spain.

Just go to travelsafe.spain.info and get all of the information you need to plan your trip to Spain safely and securely, with information tailored for your country of origin.

It will tell you the latest up-to-date information for traveling from your particular country to Spain, as well as answering all of your common questions about when you are there, and when you return home.

I know many of you, like myself, are thinking of heading to Spain as soon as possible, so you owe it to yourself to check out the website before you go.

Once again that is travelsafe.spain.info or just click on the link in the show notes.

The man we know as Nostradamus is the Latinized name for Michel de Nostredame.

He was born in 1503 in Provance to a family which had converted from Judaism to Catholicism a generation earlier. The family name was changed from Gassonet to Nostredame, which means Our Lady, in what was believed to be an attempt to avoid the inquisition.

His father was a grain dealer and his family was rather well off.

He was academically inclined. He was educated as well as anyone could be in the 16th century, having been instructed in mathematics, classical Greek and Latin, as well as astrology.

In 1531, he was married and then had two children. However, both his children and his wife were killed in a plague outbreak in 1534.

He spent several years in Provance fighting the plague and developed techniques which would seem far more modern than what was being done by most physicians at the time. He didn’t bleed his patients and encouraged the removal of corpses from city streets. He also developed a treatment called a “rose pill” which was basically a lozenge with vitamin C.

He remarried in 1547. His second wife was a wealthy widow by the name of Anne Ponsarde, and together they had six children.

Up until this point in his life, there was nothing about him that would have been worth doing a podcast episode about.

By this time he had developed a fascination with the occult. In 1550, he wrote and published an almanac. The book was a surprising success. His almanacs contained astrological information for the upcoming year, as well as prophecies which he made.

His almanacs developed him a following and resulted in people asking him for personal astrology readings.

Soon after the publication of his almanacs, he began work on the thing that would make him a household name. It was a series of poems, all written in the form of quatrains. A quatrain is simply a poem that has four lines.

The quatrains were cryptically written prophecies. The annual prophecies in his almanac were always his most popular feature, so he figured he might as well go all in.

The quatrains would often use wordplay and would mix in words from other languages.

The first collection of 353 quatrains was published in 1555 under the title  Les Prophéties.

It was around this time that he captured the attention of one Catherine de Medici, of the Florence de Medici family, one of the wealthiest and most powerful families in Renaissance Europe.

However, most people in France at that time knew her by a different name: The Queen of France, wife to the King of France Henry II.

She took a liking to Nostradamus due to a prediction he made in his almanac about the royal court. She brought him up to Paris where he eventually got a position at court as the physician to her son who would be King Charles IX of France.

He eventually succumbed to gout, from which he suffered for years. He passed away in 1566 at the age of 63.

The interest in Nostradamus, however, isn’t in his biography, it is his prophecies.

He published another edition of Les Prophéties in 1558 which had more quatrains, and then a final version of was published in 1568 after his death.

In total, he wrote 1,000 quatrains. The quatrains were placed in groups of 100 called centuries.

Of the 1,000 quatrains he wrote, 942 have survived. 58 quatrains from century number seven have been lost.

So, let’s get into the juicy bits. Just what is the deal with these prophecies and just how accurate were they?

Many of the quatrains were not at all original and were taken from other sources. They weren’t plagiarized word-for-word, but many of the general themes and stories came from other texts.

Many of his sources came from classical literature. He took bits from the stories of Romans such as Nero and Sulla, and also lifted portions from texts from Livy, Suetonius, and Plutarch.

In the mid-16th century, most people had never read these authors and would have had no clue they came from there.

Likewise, he also many have plagiarized from some astrologers who were his contemporaries.

Some have suggested he practiced “bibliomancy” which is where you randomly open a book and work from whatever you find on that page.

Nostradamus’s use of many of these ancient sources didn’t come to light until almost 100 years after his death.

It should also be noted that the editions of Les Prophéties were all different from each other. Given the state of printing at the time, there were differences in how the words were laid out on the page, and how they were spelled. The differences in spelling cause huge problems for people who try to interpret the quatrains and find meaning where there is often a single character difference in some words.

Most of the quatrains deal with disasters, wars, or other calamities, however, they do so in a very vague and general sense.

Over time, many Nostradamus enthusiasts have been able to find support for almost every major event which has happened. They have found quatrains which they claim predicted the rise of Hitler, the French Revolution, landing on the Moon, the September 11th attacks, and the assassination of John F. Kennedy.

In fact, some quatrains have been interpreted to have prophesized multiple different events.

Given how vaguely they are worded, this is not surprising.

Yet, some people claim that his prophecies have been uncannily accurate. Probably the most famous quatrain is where he supposedly names Hitler by name.  There are almost four thousand lines of quatrains, so I’m not going to go through most of them, but I will read the passage with the supposed Hitler prediction.

It comes from Century 2, Quatrain 24:

“Beasts ferocious with hunger will cross the rivers,

The greater part of the battlefield will be against Hister.

Into a cage of iron will the great one be drawn,

When the child of Germany observes nothing.”

What people go nuts about with this quatrain is the word “Hister” because it is one letter away from the word “Hitler”.

Well, what most people don’t realize is that Hister is one of the Latin names for the Danube River. We know that Nostradamus used quite a bit of Latin, so the use of a Latin term shouldn’t be surprising.

The big thing is that beyond the close spelling of one word to Hitler, the rest of the quatrain doesn’t really mean much of anything. The word “Germany” is also there, which I guess really cements the association in the mind of some people, however, there isn’t much else.

When you move beyond the individual words, however, it doesn’t make much sense.

“Beasts ferocious with hunger will cross the rivers” Um, ok. What does that mean? Some think that this is referring to the United States having to cross the oceans to fight in World War II.

If Hister is referring to the Danube, a place, then the inclusion of the word river makes more sense. In fact, the entire meaning of the quatrain is different.

In fact, there are several other mentions of “Hister” in the quatrains, most of which are ignored by Nostradamus fans because they clearly aren’t talking about a person, let alone Hitler.

This is precisely the problem. All of the interpretations of Nostramanus are backward-looking. They are engaging what some have called retroactive clairvoyance. There hasn’t been a single forward-looking prediction that has proven correct based on Nostradamus.

Most of the popularity of Nostradamus has come since the end of the second world war when translations became widely available. Most of the translations of Les Prophéties are translations that are considered poor at best, and none of the English translations have been based on the original 16the century books.

As with English, 16th century, French is very different than it is today and most of the translations lack the subtlety which would be necessary to do a translation properly. This is on top of the problems with spelling found in the original printed volumes.

Some of you might be thinking that you’ve read an uncanny prediction that Nostradamus made about 9/11 or about COVID. Well, those quatrains that were making the rounds on Facebook were all fake. They aren’t real quatrains and it sort of hammers home the point about how vague his writing was.

Some of you might also remember a 1981 movie titled “The Man Who Saw Tomorrow” which was narrated by Orson Wells. I remember watching it at the time and being fascinated by the predictions Nostradamus made.

However, when you take a step back and actually look at what Nostradamus actually wrote, it doesn’t hold water. Moreover, the now 40-year-old predictions of what would come in the future haven’t held up well at all.

The idea of a prophet who predicted the future certainly sounds compelling, however, when you scratch the surface, the prophecies of Nostradamus aren’t much more than ambiguous plagiarism.

If you write a thousand vague prophecies, over 500 years a few of them are bound to bear a vague resemblance to actual events.

My prophecy today comes from Michael in France back in 1555. He wrote:

From the land of cheese, Garty will rise

And throughout the world, the pod shall be cast.

He shall enthrall many with his words

And five stars will rise in the house of Apple.

Thanks, Michael. Please keep me in mind when Mabus the third-antichrist rises in the East and destroys civilization.

Remember, if you left me a vaguely worded five-star prophecy in the past, you too can have it interpreted on the show.