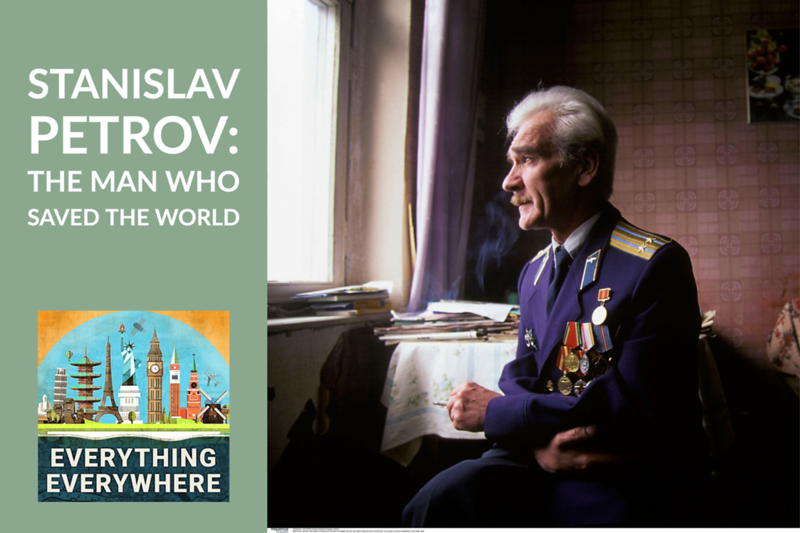 I’ve done episodes before about people who have saved a large number of human lives. Mostly, these people have done so through inventions or innovations in fields like agriculture or medicine.

What about people who prevented an impending disaster? Like when Superman stops an asteroid from hitting the Earth.

Well, there was such a case, and thanks to the actions of a single man, millions of lives might have been saved.

Learn more about Stanislav Petrov, the man who saved the world, on this episode of Everything Everywhere Daily.

In 1983, the Cold War was near its height. The number of nuclear warheads on Earth was at an all-time high. The Soviet Union and the United States were both on high alert and either side could launch a full-scale attack in a matter of minutes.

The president of the United States was Ronald Reagan, who was a staunch cold warrior, and the leader of the Soviet Union was the former KGB chief Yuri Andropov.

In September things were especially tense. On September 1, the Soviets shot down a passenger aircraft, Korean Airlines flight 007, which had strayed over Sakhalin Island in the Soviet Union. 269 people on board were killed in the attack.

Moreover, information leaked after the end of the Cold War indicated that the Soviet Union was preparing for an eventual first strike by the United States. They initiated a program called Operation RYAN in 1981, which was organized by then KGB chief, and now Soviet leader, Yuri Andropov.

This was the situation in the world when the events of this story took place on September 26, 1983.

Stanislav Petrov was born in 1939 in Vladivostok. His father flew fighter aircraft in World War II and he followed in his footsteps by joining the Soviet Air Force.

He graduated from the Kiev Higher Engineering Radio-Technical College in 1972 and was assigned to the newly created Soviet early warning system. The system was designed to detect the launch of American missiles against the Soviet Union.

In the event that one side was to launch a first strike, the amount of time to detect the launch and order a retaliatory strike was shockingly short. The entire process could take just 30 minutes, which is the amount of time it would take an intercontinental ballistic missile to travel from the US to the Soviet Union.  There was no time to verify if launch information was correct, and no time to contact the American’s to negotiate.

The Soviet system was designed that if there was evidence of a launch, notification of the launch was to be sent up the chain of command where the authority to authorize a counter strike would reside.

By 1983, Petrov had risen up the ranks and had achieved the rank of Lieutenant Colonel in the Soviet Air Force.

Early in the morning of September 26th, Lieutenant Colonel Petrov was the duty officer on the night shift overseeing the early warning system at the secret Soviet military facility Serpukhov-15, outside of Moscow.

Shortly after midnight, the moment that Stanislav Petrov had trained for, yet had hoped would never happen, happened.

Sirens went off indicating there was a ballistic missile launch from the United States.

According to Petrov, he said, “The siren howled, but I just sat there for a few seconds, staring at the big, back-lit, red screen with the word ‘launch’ on it…”

Not only did the system indicate that there had been a launch, but it also showed that this data was the highest level of confidence.

A minute later, another siren went off, indicating there was a second missile launch….and then a third, a fourth, and a fifth.

Five missiles wasn’t really overwhelming force. The whole point of a first strike was to remove the ability of the target to strike back. Five missiles wouldn’t do that, even if they all hit important targets. As he told the Washington Post in an interview, “When people start a war, they don’t start it with only five missiles,”

Moreover, Petrov knew that the satellite detection system which looked for missile launches was still new. On top of that, the ground-based radar installations were not showing any incoming missiles.

The procedures for what was supposed to be done were very straightforward. Upon notification of a launch, the duty officer was to send  notification to his superiors, who would then give the authorization to launch. Soviet policy dictated an immediate retaliatory strike in such an event. This was very probable considering the political climate at the time and who was in charge.

There were 200 people in the room with everyone looking at Lieutenant Colonel Petrov, waiting for him to make a decision.

The decision that Lieutenant Colonel Petrov made…..was to do nothing.

He violated his orders and didn’t contact his superiors notifying them of the launch warning.

He went with his gut instincts over his standing orders.

Within minutes, the lack of missiles falling on the Soviet Union would verify that his instincts were correct.

Eventually, once the crisis had passed, his superiors were notified about what happened and there was an investigation.

Initially, he was praised for his decision. General Yuri Votintsev, commander of the Soviet Air Force’s Missile Defense Units, said that Petrov did the right thing.

However, he was subsequently reprimanded for improperly filing paperwork, which was more of a slap on the wrist for not following orders, even if by doing so it managed to avoid World War III.

In the end, he was neither rewarded nor punished. The incident was a major embarrassment for the Soviet establishment which created the satellite system.

The satellites detect a missile launch by looking for the heat signature which comes from a rocket. This is why to this day, the Americans and Russians notify each other before a rocket is launched.

American estimates were that if the Soviets were to have launched, there might have been between 80 and 180 million deaths, just on the American side. The Americans of course would have then responded in kind, killing 50 to 110 million more.

The story of Stanislav Petrov and what happened on September 26, 1983, wasn’t released to the public for 10 years. It wasn’t until the Soviet Union collapsed that knowledge of that day became public.

As it turned out, this wasn’t the first or last time that a nuclear close call like this happened.

In 1962 during the Cuban Missle Crisis, a Soviet submarine was being hit with depth charges and thought that a war had already started. They were going to fire a nuclear torpedo at an American ship, but that action required the three senior officers on board to be in agreement. One officer, Vasili Arkhipov, dissented and the nuclear torpedo wasn’t launched.

On January 25, 1995, the Soviets picked up another launch which was taken all the way up to Russian President Boris Yeltsin. He declined to launch, and it turns out it was an American-Norwegian research rocket.

As for Stanislav Petrov, he was quietly reassigned after the incident. He later left the military and had a nervous breakdown. After the collapse of the Soviet Union, he eventually was growing his own food to survive.

When the story of the events of 1983 finally became public, Petrov was finally given the recognition he deserved. He was given several modest cash prizes by peace groups which helped his financial situation immensely.

When he died, he had the distinction of having perhaps saved more lives, in an immediate and direct fashion, than any other person in human history.