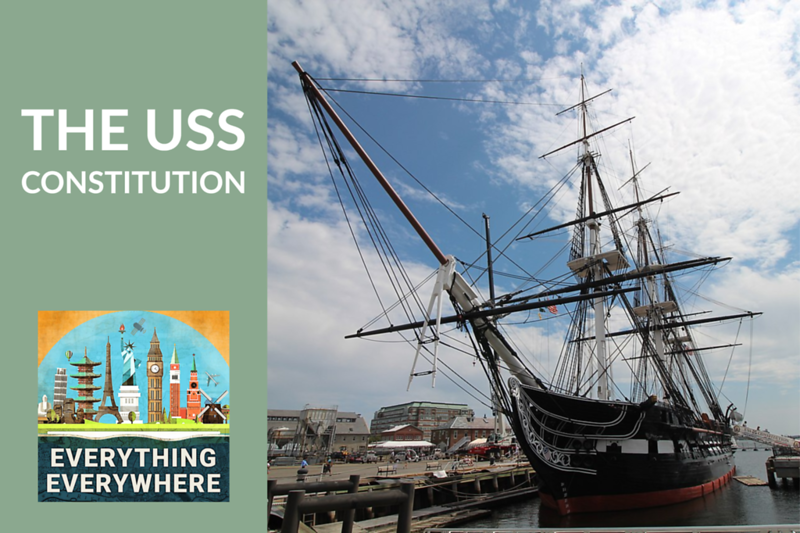 On March 27, 1794, the United States Congress passed the Naval Act. The Naval Act authorized funding for six frigates which would become the basis for the new US Navy.

One of those six ships, and the third one built, was the USS Constitution. It was launched in 1797 and saw service in multiple conflicts all around the world.

That ship which first set sail 225 years ago, is still in service and operational today.

Learn more about the USS Constitution, the world’s oldest ship still afloat, on this episode of Everything Everywhere Daily.

One of the first orders of business of the brand new United States was to create a navy.

If this new country was to be taken seriously, it had to have a navy. Britain, France, and Spain all were the major powers who could make or break this new country, and they all had major navies to project their power from Europe.

Moreover, soon after the constitution was ratified, American merchant ships began having problems with Barbary pirates off the coast of Algeria. There wasn’t anything the US could do about it because they didn’t have a navy.

To create this navy, the United States Congress passed the Naval Act of 1794. The act authorized the purchase of six frigates for a price of $688,888.82.  These six ships would become the first ships in the new United States Navy.

There were ships in the Continental Navy during the Revolutionary War, but those were sold off because they didn’t have the money to maintain a navy.

That happened in March of 1796 when the three ships currently being built had their construction halted when the United States signed a treaty with Algiers.

However, Congress wanted to get see a result for the money they already spent, so they agreed to fund three of the six ships that were being constructed. They were the USS United States, the USS Constellation, and the USS Constitution. Eventually, with the XYZ affair, the remaining three ships were approved by congress and built.

The ships were designed by American shipbuilder Joshua Humphries, who is considered the father of the American navy.

The Constitution was equipped with 44 guns and it was built to be larger than most ships of that period. The theory was that because the United States couldn’t match any of the navies of that period if they were to get in a scrap they needed to at least outgun any ship they might come up against.

The ship was constructed with 60 acres of trees, mostly pine and southern live oak, which came from St. Simons, Georgia.

The ship was officially launched and dedicated on September 20, 1797, in Boston with President John Adams and Massachuttes governor Increase Sumner in attendance.

Wooden ships at this time didn’t have a very long life expectancy. If a ship were to last 15 to 20 years, that would be considered normal. There were issues with worms, barnacles, storms, seawater, underwater rocks, and of course being blown to smithereens by other ships.

The Constitution began its service off the southeastern coast of the US in 1798 during the Quasi-War with France. The French were attacking American merchant ships at the time, and this is going to be the subject of a future episode.

The Constitution served in the Mediterranean as the flagship of the American fleet and fought at the Second Battle of Tripoli Harbor on July 14, 1804.

In 1807 the ship returned to Boston for refitting which took two years, and in 1809 it served as the flagship of the North Atlantic Squadron.

The repairs weren’t very good as they didn’t replace the copper shielding on the hull, so it went back in in 1810 where they cleaned out a reported 10 wagon loads of barnacles and seaweed off the hull.

With the outbreak of war with Britain in 1812, it once again saw combat. Its exploits during the War of 1812 were what made the ship noteworthy. It sunk five British ships: the HMS Guerriere, Java, Pictou, Cyane, and Levant.

Its most famous battle was with the Guerriere which took place on August 12, 1812. The two ships spent 20 minutes firing at each other broadside, and this was when the ship was given its nickname, Old Ironsides because many of the cannonballs from the Guerriere bounced harmlessly off the hull.

The exploits of the USS Constitution was one of the major reasons the United States became recognized as a serious naval power.

The ship went back in for repairs which took five years before being sent back to the Mediterranean to lead the US Mediterranean Squadron.

By this point, the Constitution was well past its expected life span. It was over 30 years old, and naval technology was changing fast.

In 1830, the ship was once again in Boston for repairs. A rumor began circulating that the ship was going to be scrapped and on September 14, an article stating that was run in the local Boston Advertiser newspaper.

Aye tear her tattered ensign down

Long has it waved on high,

And many an eye has danced to see

That banner in the sky;

Beneath it rung the battle shout,

And burst the cannon’s roar;—

The meteor of the ocean air

Shall sweep the clouds no more.

In the 1850s, its assignment was off the African coast where it was hunting slave ships.

In 1857, the purpose of the ship was radically changed. It was put into dry dock and converted into a training ship for the Navy. The number of guns on the ship was reduced and classrooms were added.

Its role as a training ship was what it did throughout the Civil War. After the war, it remained docked at the Naval Academy in Annapolis

However, by 1871, the condition of the ship was so bad, that it couldn’t even be used as a training ship anymore.

By this point, the Constitution’s other two sister ships, the United States and the Constellation, had both been retired and dismantled.

The Constitution was an old ship by 1871. It was almost 80 years old, which is really old for a wooden vessel. Ships made of iron and powered by steam were now state of the art, and a wooden sailing ship was now obsolete.

The plan by this point was to get the ship ready for the centennial celebration for American independence in 1876, but it missed that date because the repairs were so expensive.

It did manage to sail to France for the Paris Exhibition of 1878, but the repairs done years before were of low quality and the ship was declared unfit for service in 1881, and it was decommissioned from the US Navy.

The ship was used as a museum ship in Boston, but by 1905, there was talk of taking the ship out to sea and using it for target practice. A grassroots movement sprung up to save the ship and Congress authorized a $100,000 budget for another restoration.

In 1907, it was once again a museum ship that offered tours to the public. In 1917, it was renamed Old Constitution so the named could get freed up for a new Lexington-class Battlecruiser. However, that ship was never actually built, so the name was returned in 1925.

By 1925, the ship was once again in bad shape. Water had to be pumped out daily and the hull was starting to rot. You might notice that this ship has had to undergo a lot of restorations.

This restoration had its funds raised mostly privately, via a national effort organized by the National Elks Lodge for children to donate pennies. In the end, over $600,000 was raised, and Congress tossed in another $300,000.

By 1930, it was out of dry dock again and it went on a tour of east coast cities, went through the Panama Canal, and up the west coast of the United States. However, it didn’t sail under its own power. It was towed the entire trip.

It was recommissioned into the US Navy in 1931, which it remains today.

The ship remained a museum ship, with a brief stint during WWII as a brig for officers facing court marshal.

By 1970, once again the ship was in need of repairs, however, they weren’t as bad as what was needed in the past. It was in drydock from 1973 to 1974 and in 1976 for the bicentennial it lead the parade of tall ships and fired its guns for the first time in over 100 years. However, it still didn’t sail under its own power.

The 1970s restoration restored the ship to its 1812 state, for which it was most famous, and is also assigned a captain to the ship for the first time in over a century.

They also did something else in the 1970s. They established Constitution Grove, which is a collection of white oak at a 50,000-acre navy facility outside of Bloomington, Indiana. These trees are specifically grown to provide timber for USS Constitution when the planks need replacement.

In 1991, the idea was floated of doing something for the 200th anniversary of the ship which it hadn’t done in over a century. Sail under its own power.

In addition to yet more repairs to the ship, an entire crew had to be recruited and trained. All of the knowledge of sailing wooden ships, rigging, and sails had been lost as no ships sailed that way anymore. The new crew had to be trained according to the 1819 sailors manual.

On July 21, 1997, she was towed 5 miles out of Boston Harbor where she was let go and sailed under her own power, reaching speeds of up to 12 knots.

Today, you can visit the USS Constitution which is at its homeport in Boston. It will go out and sail about once a year and when it does its turnaround, you can follow alongside it on boats.

Before I end I should mention a paradox from ancient Greece known as the Ship of Theseus. It is a thought experiment about a historic ship that has its wood replaced over time as it rots. The question is, if at some point all of the wood is replaced, is it still the original ship

This thought experiment is literally true with the Constitution. In the 1925 repairs, 85% of the wood on the ship was replaced. There is only 15% of the ship today which was there when it first launched in 1797, including, most importantly, the keel.

The USS Constitution remains the oldest ship in the world which still is afloat and sails. There are older ships in museums and in dry dock, but only the 225-year-old Constitution still can sail under its own power.

Today’s review comes from listener Laemperatriz over at Apple Podcasts. They write:

This is my breakfast listening every morning. Great way to start the day with learning about a cool new thing told in an interesting and engaging way.

Thank you, Laemperatriz. It is a little-known fact that this podcast is a part of a balanced breakfast…. and while you are at it, can you pass the corn flakes.