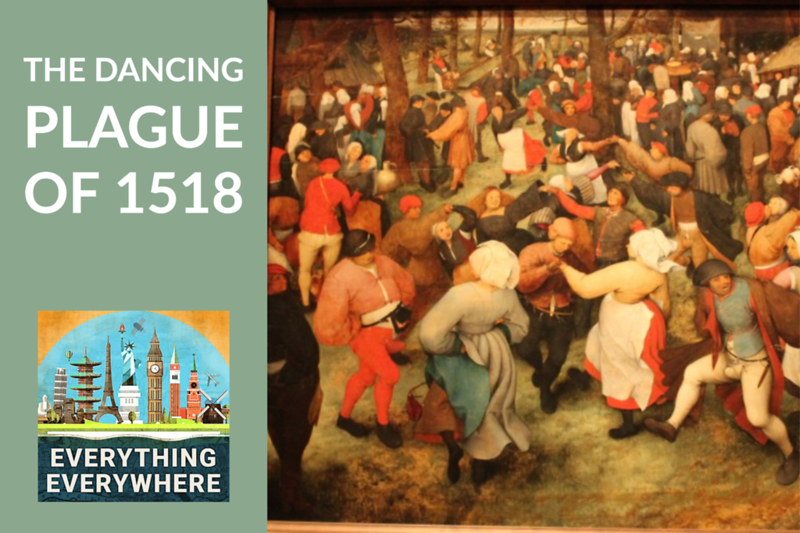 People who love to dance are said to have dancing fever. Dancing fever is just a phrase and not something meant to be taken literally.

However, could there really be an actual dancing fever? Could there be a disease that caused people, many people, to dance until they fell from exhaustion?

Learn more about the Straussberg Dancing Plague of 1518 on this episode of Everything Everywhere Daily.

To paraphrase the great Napoleon Dynamite, you gotta have skills.

There is a whole universe of things you can learn to better yourself, and skillshare can help you do it.

Some of the most popular classes on Skillshare include iPhone photography, Adobe Illustrator, watercolor painting, interior design, and creating videos for YouTube.

In his story, a vain young girl puts on a pair of red shoes that were cursed. Once she starts dancing, she is unable to stop. An angel appears to her and tells her that she cannot stop dancing and even when she dies, the shoes will continue dancing with her inside them.

Then, as is pretty typical for fairy tales, she gets her feet cut off and dies.

By the way, there is an excellent film adaptation of the story which was released in 1948 by British directors Michael Powell and Emeric Pressburger. I highly recommend watching it if you haven’t seen it.

The fairy tale of the red shoes wasn’t totally fabricated out of nothing, however.

There had been stories for hundreds of years in Europe of people and sometimes towns of people, who would dance until they collapsed. This condition went by many different names including Dancing mania, the dancing plague, choreomania, St. John’s Dance, tarantism, and St. Vitus’ Dance.

The bouts of dancing mania would affect children and adults, men and women, and they primarily occurred between the 13th century and the early 17th centuries, in Europe.

Even though it sounds like it might be totally fabricated, these instances of dance mania were very well documented. They happened enough times, in enough places, to enough people that it was known to be an actual thing.

One of the first recorded instances of dance mania occurred in the 7th century, but little is known about it beyond that it happened.

Sometime around the year 1020, there was a case of 18 people who began spontaneously dancing around a church during a Christmas Eve service in Bernburg, Germany.

There was a 13th-century outbreak with a group of children who were traveling between the cities Erfurt and Arnstadt. They danced the entire 20-kilometer distance. It should be noted that this occurred very close to the time that the story of the Pied Piper of Hamlin came out.

One of the largest and most famous outbreaks of dance mania occurred on June 24, 1374, in the town of Aachen, Germany. Starting with just a small number of dancers, it eventually overtook thousands of people, and it spread to nearby cities and regions such as Cologne, Franconia, Metz, Strasbourg, and Utrecht.

I have to stress that these outbursts of dancing weren’t like people getting up to dance at a music festival. They would start dancing, wouldn’t stop. The dancing would go on for hours in some people, and for others, it would go on for days, or even weeks. Some wouldn’t stop until they dropped from exhaustion, or in some cases even death.

The dancers were often reported to be in a state of unconsciousness and that they couldn’t control themselves.

Over the years these outbreaks of dance mania would appear, and they almost always occurred in an area around what is today western Germany.

The best-known case of dancing mania, and the case that this episode is titled after, occurred in the year 1518 in the city of Strassburg.

From the accounts we have, it all started with a single woman named Frau Troffea.  I should note that Strassburg is in France today, but it was part of the Holy Roman Empire back then and was predominantly German-speaking at the time.

From Frau Troffea, other young women joined in the dancing, and it eventually kept expanding. It began in July and it just kept spreading. Eventually, the town magistrate and the bishop got involved trying to control the dancing.

It wasn’t until September that the dancing plague eventually died out.

Episodes of dancing mania would continue to break out for several more decades before completely disappearing in the early 17th century.

While the stories of these manic dancing bouts are interesting, the big question is, what caused this? What caused various, mostly Germanic, towns and cities to suddenly develop widespread cases of people dancing uncontrollably until the point of exhaustion?

The original explanation was, not surprisingly, supernatural. However, the diagnosis was often quite different depending on who was doing the diagnosing.

Some thought that the dancing was the result of demonic possession and there were exorcisms performed on some of the dancers.

However, some thought that the dancing was the result of divine intervention from one of the saints. I mentioned before that the condition was also called St. John’s Dance, and St. Vitus’ Dance. It was believed that Saint John the Baptist or St. Vitus were responsible for the dancing. In particular, St. Vitus had the power to curse sinners with the compulsion to dance.

Contemporary attempts at trying to explaining dancing mania have gone beyond the supernatural, but they are also not anywhere united in their diagnosis.

Once word of the first cases was spread, they existed in the back of people’s minds allowing it to spring up.

Another theory is that these were actually organized events. They weren’t in fact spontaneous events but planned events by the participants who took part. The only problem with this theory is that most contemporary accounts indicate that most people did this involuntarily.

Perhaps the most interesting explanation as to what happened was that it was due to poisoning. In particular, a strain of fungus known as the ergot fungi. The ergot fungi grows on damp grains such as wheat and rye which are commonly consumed in baked goods.

Within the ergot fungi is the chemical ergotamine, which is structurally very similar to the chemical lysergic acid diethylamide, commonly known as LSD. In fact, LSD was first synthesized from ergotamine.

However, this theory doesn’t explain how people were able to dance for days. What we know about the effects of psychotropic drugs doesn’t fit the facts.

Even a geographic explanation is hard to make fit the facts. While the majority of the dancing mania cases occurred along the Rhine and Mosul rivers, there were also some cases in Italy and Spain.

So, the truth is we really don’t know what caused these cases of the dancing plague. Any theory which explains it would also have to explain why it stopped.

I personally lean to the mass hysteria explanation. We’ve seen fads and other social trends before in history, and this might just be an example of that. It wouldn’t require anything chemical or supernatural to explain everything.

So the next time you hear a song that references “dancing fever” or “dancing the night away”, remember that there were people in history to took that very literally.