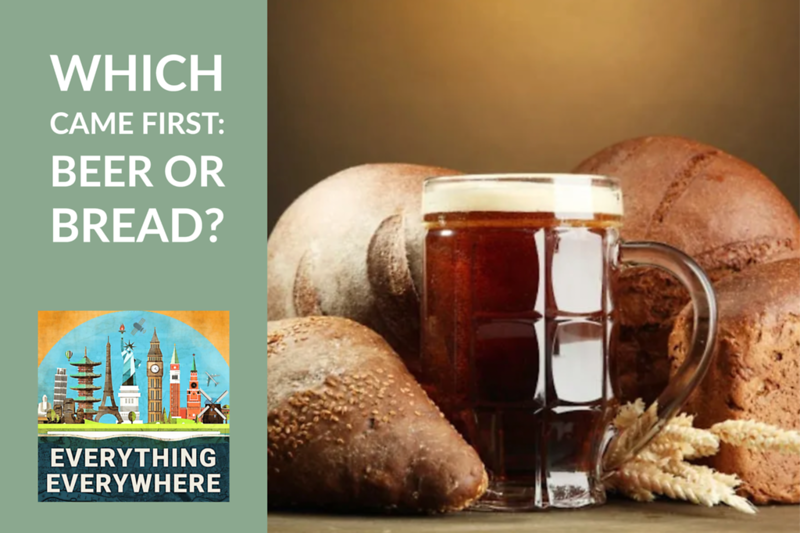 The rise of agriculture has been pointed to as being responsible for the rise of civilization as we know it.

However, that raises the question, what was responsible for the rise of agriculture? In particular, at least in the Middle East with the cultivation of grain, the debate has always been which came first: Beer or Bread?

Learn more about the great beer vs bread debate, and which was responsible for the rise of civilization, on this episode of Everything Everywhere Daily.

My audiobook recommendation today is The Brewer’s Tale: A History of the World According to Beer by William Bostwick.

The Brewer’s Tale is a beer-filled journey into the past: the story of brewers gone by and one brave writer’s quest to bring them – and their ancient, forgotten beers – back to life, one taste at a time. This is the story of the world according to beer, a toast to flavors born of necessity and place – in Belgian monasteries, rundown farmhouses, and the basement nanobrewery next door.

Fueled by date-and-honey gruel, sour pediococcus-laced lambics, and all manner of beers between, William Bostwick’s rollicking quest for the drink’s origins takes him into the redwood forests of Sonoma County, to bullet-riddled South Boston brewpubs, and across the Atlantic, from Mesopotamian sands to medieval monasteries to British brewing factories.

If someone were to just ask you which came first, beer or bread, most people would respond bread, and with good reason. Bread is a form of food, and beer is something that isn’t really a necessity.

The question of which came first, beer or bread, is a very tricky one. For starters, I’m only going to be focusing on the development of agriculture in the Middle East and in the fertile crescent. Agriculture independently arose in several different places around the world. This includes places such as Papua New Guinea and Peru.

I’ll be talking about the rise of agriculture in other places in future episodes, but for this episode, I’m going to focus on the places which first harnessed grains such as wheat, which means the Middle East and Egypt.

There was an enormous amount of overlap between beer and bread, so trying to untangle the two might be a very difficult prospect.  The real question then isn’t which came first, beer or bread, because that is pretty much an impossible question to answer. The real question is which drove the rise of agriculture? Did ancient people grow grain to make beer or to make bread?

If you remember back to my episode on the history of bread, there is evidence of humans processing grains 105,000 years ago.

The oldest evidence we have of something that we can call bread goes back 14,000 years. There were burnt crumbs found around an ancient fire in modern Jordan. It was probably just something like bannock which isn’t a leavened bread and it was cooked over an open fire.

Beer, on the other hand, doesn’t leave crumbs.

So what is the earliest evidence for the production of beer?

Written evidence of beer goes back as far written evidence goes. There is a pictogram dating back 6,000 years from the settlement of Tepe Gawra in modern-day Iraq which shows two figures drinking from a large jug through straws.

There are tablets from the Sumerian town of Uruk, which are the oldest examples we have of human writing. These tablets are actually accounting receipts that record the distribution of food and beverages.

There is a Sumerian character for beer, and the documents show countless entries which say such-and-such was “issued his daily ration of beer and bread”. It is believed that beer and bread were considered payments for labor.

In the epic of Gilgamesh, it says that the ‘wild man’ Enkidu was given beer to drink, and “… he ate until he was full, drank seven pitchers of beer, his heart grew light, his face glowed and he sang out with joy.”

A poem written from that time period was an ode to the Sumerian goddess of brewing, Ninkasi. It says,

“Ninkasi, you are the one who pours out the filtered beer of the collector vat… It is [like] the onrush of Tigris and Euphrates.”

Ancient Egyptians would greet each other with the phrase “bread and beer”.

Pyramid workers were allocated four loaves of bread and about five litres of beer a day.

There are more references to beer in ancient Egyptian writing than any other foodstuff.

It is pretty clear that if we go back to the dawn of civilization, both bread and beer were pretty important, and beer might even have a slight edge at least in terms of the number of times it was mentioned.

Before I go over the evidence even further back in time, I should describe exactly what we are talking about when we talk about ancient beer.

It probably wasn’t at all close to the modern beer that we have today, regardless of what type of beer you were talking about. It wasn’t an ale, lager, IPA, stout, or anything else you’ll see served at a bar.

The closest thing you could describe it as would be as a grain gruel. It would have been much thicker than modern beers and it might have still had bits of grain floating in it.

What would the point have been of brewing beer? The purpose for beer thousands of years ago would have been different, but not totally different, then the reason we drink beer today.

First and foremost, beer was a source of calories. If you have heard beer being called “liquid bread” that isn’t actually far from the truth. Beer was a form of food insofar as it provided calories and energy to those who drank it.

Secondly, beer provided a way to safely consume drinking water. Ancient water sources were probably cleaner in some respects than modern water, however, they still had to deal with waste and dead animals in their water, which was probably worse.

The process of brewing beer would heat the water, killing many pathogens. Furthermore, the alcohol in the water would further kill pathogens and ensure that many of them wouldn’t grow back. Drinking beer was safer than drinking straight water.

This was actually the case up through the early 20th century with the development of modern water treatment facilities. People consumed what we would consider an incredible amount of alcohol, even though much of it had a very low alcohol content.

Finally, beer was relatively easy to produce. Modern home brewing is actually rather complicated with the various recipes and equipment which most homebrewers need. Ancient beer was usually nothing more than mashed-up grain in water.

They wouldn’t have used hops back then. The yeast would have come from naturally occurring yeast in the air. Some seeds would be allowed to sprout, resulting in malt.

Ok, so what was the beer situation before Sumerians and ancient Egyptians?

While we can’t find crumbs of beer, we can find chemical evidence of fermentation in pottery and vats.

There have been traces of a substance called beerstone found at the bottom of pottery in Iran. Beerstone, also known as calcium oxalate, is still a problem that plagues brewers today.

Fermentation evidence was found in ancient China 9000 years ago, before the advent of the rice revolution, when grains like millet and wheat were more important crops.

The oldest evidence found so far for beer fermentation was in the caves near Mount Carmel in Israel. These fermentation pits were from the ancient Natufian people and date back 13,000 years.

So, beer and bread both go back really far, and it doesn’t really give us a definitive answer to the question.

If you remember back to my episode on Gobekli Tepe, there has not been any evidence found there to indicate people permanently lived at Gobekli Tepe or that they ate anything other than wild game.

However, there is evidence that there was brewing taking place.

The implication of everything is that nomadic people came to Gobekli Tepe to build the monolithic structures, eat game meat that was hunted, and drink beer.

Gobekli Tepe might have been the neolithic version of a permanent Oktoberfest site.

If this interpretation of the evidence is correct, beer might have been the reason for neolithic humans to harvest grain. It would have been used seasonally for socializing with other nomads. This seasonal harvesting of wild grain might have then evolved into full-blown agriculture.

Also, making primitive beer was probably much easier than making bread. The processing of the grain required to make bread would have been much more in terms of the milling and removal of the husks.

If true, this would mean that the rise of agriculture, at least in the fertile crescent, had more to do with ritual and socialization than it did with trying to cultivate surplus calories.

Or, to put it more simply, agriculture might have arisen because early humans wanted to get their drink on.