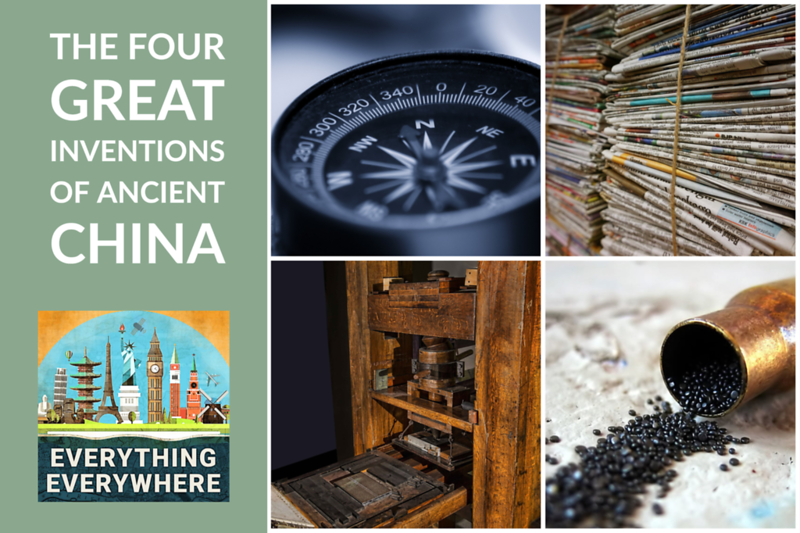 As I have mentioned before on this podcast, there are a great many things that were originally invented in Ancient China. There are literally hundreds of inventions that were developed in China before they were introduced anywhere else.

However, there are four inventions in particular which stand out as having revolutionized not just Chinese civilization, but the entire world.

Learn more about the four great inventions of ancient China, and how they got to the rest of the world, on this episode of Everything Everywhere Daily.

One of the interesting things about China is that they love lists. There are all sorts of things through Chinese history that is in list form. There are the Four Great Beauties, the Eight Immortals, the Seven Warring States, the Three Kingdoms, and the Gang of Four.

It should come as no surprise that there is such a thing as the Four Great Inventions.

However, what makes the Four Great Inventions such an odd list for China, is that the list was created by someone British.

The Four Great Inventions were actually concocted by British historian and sinologist Joseph Needham. He spent a good portion of his life collecting and documenting examples of Chinese inventions and technology. He published his first book on the subject in 1954 where he listed many Chinese inventions which were originally thought to be European inventions. These include mechanical clocks, plowshares, cast iron, stirrups, and the saddle.

In the 16th century, there was a meme floating around called the Three Great Inventions, which were attributed to the greatness of Europe, or more specifically sometimes, Germany. They might have been created by English philosopher Francis Bacon: They were the printing press, gunpowder, and the compass.

As explorers began more frequently visiting China, they realized that all of those great inventions had been around in China for centuries before they appeared in Europe.

So, as part of his work and setting the record straight, Needham created the Four Great Inventions of China. A list that has subsequently gained widespread approval from scholars in China itself.

The Four Great Inventions are the three listed before: the printing press, gunpowder, the compass, and the other being paper.

One of the reasons I’m doing this episode now is because I want to do future episodes on each of the inventions which I haven’t covered already, and I felt this was a good overview that could be referenced later on.

So with that, let’s briefly go through the Four Great inventions, with the understanding that I’ll be giving most of them a more in-depth treatment in a future episode.

Of the four great inventions, this is the one which we can say for certain didn’t transfer from China to Europe. The other three are rather simple and can easily be transferred. A printing press is very large and unwieldy and it requires an expert to work it.

We have enough documentation from Gutenberg and the funding he raised to know that he tinkered by himself for years to perfect his printing press. It was created independently, but it wasn’t created first.

Why did Gutenberg’s printing press catch on and spread so quickly, whereas Chinese printing did not?

Despite the creation of movable type, China mostly stuck with block printing until the 19th century. Block printing is when you carve out an entire page out of a single block usually of wood. This was mainly due to the thousands of Chinese characters which made block printing more practical than movable type.

The smaller number of Latin characters made movable type much easier and cheaper.

The political system in China also tended to centralize information, whereas in Europe there were many competing states and religions.

The second great invention, and the one which complements the printing press, is paper.

There were surfaces for writing before the invention of paper. The Egyptians developed papyrus, but papyrus isn’t paper. Papyrus is more of woven material. It is time-consuming to create and it is only created with the papyrus plant.

Likewise, parchment is used for writing but it requires animal skins and it is expensive and time-consuming to produce. Parchment was so valuable that it was often reused by scraping off the ink from previous writings.

Paper is superior to papyrus and much cheaper than parchment. The earliest evidence of paper in China goes back to the second century BC. Its invention is often attributed to a Han Dynasty court official known as Cai Lun, but it probably predates him.

The process probably started with cloth and rags. They would be pounded in water until they became fibers and from there would create a mat. Eventually, the idea was expanded to the bark of trees.

Paper allowed the Chinese to affordably record and transmit ideas, as well as allowing for the creation of paper money and eventually toilet paper. The creation of toilet paper was a testament to just how cheap and ubiquitous paper had become.

Paper as technology moved westward over the centuries. It was in Vietnam in the 3rd century, India in the 7th century, central Asia in the 8th century, and Islamic lands in the 10th century.

It didn’t make it to Europe until the 11th century. By that time there were paper mills being operated in France.

However, it all started in China.

The third great invention is gunpowder.

There were proto-gunpower mixtures going back as far as the second century in China. Most of it involved the properties of burning saltpeter.

The mixture was finally perfected in the 9th century during the Tang Dynasty. It is believed that the invention of gunpowder was probably an accident by an alchemist trying to create the elixir of life.

The recipe first gunpowder recipe written down was for  “six parts sulfur to six parts saltpeter to one part birthwort herb”.

This recipe wouldn’t be a true explosive, however, because the ratio of saltpeter, or potassium nitrate, was too low.

The first weapons were fire arrows, which were just arrows with bags of gunpowder attached.

Over the next few centuries, the recipe for gunpowder improved and its use as a weapon increased with the development of bombs and other devices.

Unlike paper, knowledge of gunpowder spread relatively rapidly. Gunpowder only required knowledge of a simple formula to be spread. It was in the middle east by the early 12th century and Roger Bacon was mentioning it in Europe just 2 decades later, and a few decades after that it was being produced.

Early Europeans writing about gunpowder recognized it as an invention from China, but that was forgotten in subsequent generations.

The fourth and final great invention of China was the compass.

The discovery that lodestone, aka the mineral magnetite, would align with the Earth’s magnetic field, was made over 2,000 years ago during the Han Dynasty.

It was originally called the “South Pointing Fish”.

Surprisingly, for almost 1,000 years the compass wasn’t used for navigation. It was simply a novelty and used for divination.

It wasn’t until the Song dynasty around the year 1040 when it was first documented for use in navigation, and another century before it was used for maritime navigation.

There is also evidence of Chinese magnetizing needles and using a wet compass with a floating needle.

While the record is quite clear that the compass was first discovered in China, it isn’t clear that the technology was disseminated from China like paper and gunpowder.

The first written use of a compass for navigation in Europe occurred in the late 12th century, very soon after it was used for navigation in China. Either the compass was transferred much faster from China to Europe than any other technology at the time, skipping the Islamic world by several decades, or it was discovered independently.

Here I’ll reference my episode on the journeys of Admiral Zheng He and how he was long journeys on massive ships centuries before the European Age of Exploration. This was in large part due to the compass.

In the 16th century, Europeans spread the myth of the three great inventions, even though none of them were invented in Europe.

In 2017, Chinese state media began to talk about the Four New Inventions of China. They were high-speed rail, mobile payments, e-commerce, and bike-sharing.

The problem of course is that none of these things were invented in China.

High-speed rail was first unveiled in Japan with their Shinkansen trains. Mobile payments were developed in Scandinavia. Bike-sharing was created in the Netherlands and modern e-commerce was developed on the early internet in the United States.

I guess the four new inventions, like the three great inventions of Europe, only shows that what goes around comes around. I don’t know if anyone invented that.

I wanted to give everyone a heads up that I’ll be running encore shows the rest of this week. I’m going to be going on a trip for the first time in a year and a half.

I’m actually not going very far, it’s a 2-hour bus ride to Milwaukee, but it is more than I’ve done the last 18 months. I’ll be speaking at a conference and staying in a hotel and actually talking to real people in person. So, I’m calling it a trip can the closest thing I’ve had to a vacation in a long time.

I”m hoping to use this break as an opportunity to get my sleep schedule back to normal. I’ve been going to bed at 5 am most days lately.

Statistically speaking, many of you haven’t heard these shows so they will be new to you, and for the rest of you, it probably doesn’t hurt to brush up on old material.

While I’m gone, I’m hoping to get ahead with my episode writing. I now have over 500 episode ideas on my master list so I have a lot of ideas to work on.