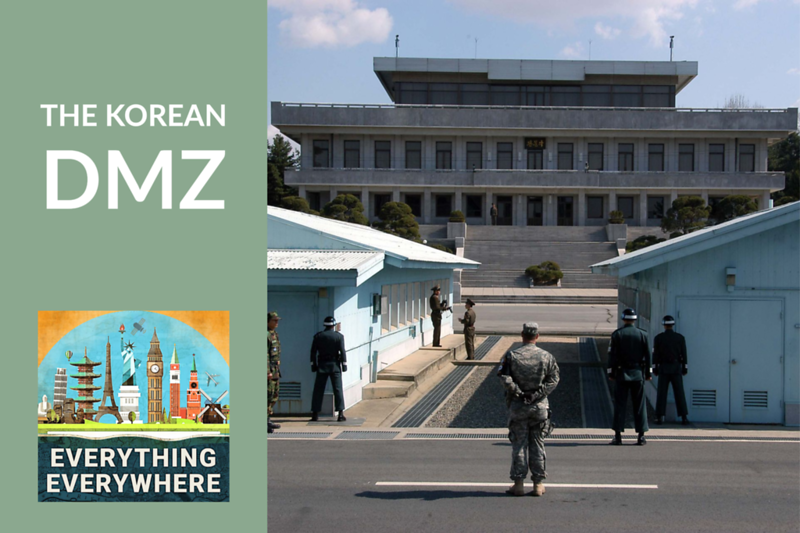 In the early 1950s, war ravaged the Korean peninsula. However, the fighting ceased on July 27, 1953. Both sides of the conflict pulled back from the front and created a buffer zone 4 kilometers or 2.5 miles wide.

Learn more about the Korean Demilitarized Zone, its past and present, on this episode of Everything Everywhere Daily.

The Korean War, or the Korean Conflict as it is often called, began with the division of the Korean peninsula after World War II.

Korea had been occupied by the Japanese and after the war, the decision was made in 1945 to divide Korea into Soviet and American occupation zones, similar to how Germany had been divided.

The Americans proposed to divide the country at the 38th parallel, and the Soviets, to the surprise of the Americans agreed.

This division of the country was only intended to be temporary. However, with the rise of the Cold War and increasingly strained relations between the US and the Soviets, an agreement couldn’t be reached as to the future of a unified Korea.

Eventually, in August of 1948 the Republic of Korea, aka South Korea, was declared, and three weeks later, the Democratic People’s Republic Korea was created. The north was supported by the Soviet Union and the south by the United States.

Both countries claimed to be the true government of the entire Korean peninsula and the two countries were extremely hostile towards each other.

These tensions boiled over on June 25, 1950, when North Korea invaded the south in an attempt to unify the two countries.

The initial invasion was extremely successful, pushing the South Korean army and the Americans down to a small corner in the southeastern part of the peninsula by September.

However, within two months of the greatest extent of the North Korean advance, the South Koreans and Americans had pushed them back to the Chinese border by November.

At this point, the Chinese entered the war and pushed the South Koreans and Americans back to approximately where the original border was, and where the war was mostly fought for the next several years.

After almost two years of negotiation, on July 27, 1953, an armistice was signed between North Korea, the People’s Republic of China, and the United States. South Korea never signed the armistice and still never signed it to this day.

The organization created to oversee the armistice was the United Nations Command, Military Armistice Commission, Korea, and it still serves this function today.

The armistice, like the original division of the peninsula, was only intended to be temporary, but it has now been in effect almost 70 years.

In addition to a cessation of hostility, the armistice also created two geographical entities. The first was the Military Demarcation Line or the MDL. This is the de facto border between North and South Korea. The MDL is simply the front where the two sides were fighting at the time of the armistice.

The MDL is defined by a series of 1,292 metal signs which were posted along its 248 kilometers or 154-mile length. Each sign is identical with the words “Military Demarcation Line” written in Korean and Chinese on the north-facing side, and in Korean and English on the south-facing side.

The signs haven’t been changed or repaired in almost 70 years and are now rusting and dilapidated.

The second geographic feature created by the armistice is the demilitarized zone or DMZ.  The armistice stipulated that each side pull their troops back 2 kilometers so there was a 4-kilometer buffer between them. The Americans originally wanted a 20-mile buffer zone, but eventually settled for 4 kilometers.

One of the oversights in the armistice agreement is that it never dealt with the border at sea. This is especially problematic with the western side of the peninsula which has many islands.

There were five islands that were specified in the armistice which are under the control of South Korea, some of which are very close to the North Korean mainland. While the islands are South Korean, the line in the water separating the two countries is undefined and has been a source of conflict over the years.

The armistice stipulated that each side may have a populated village within the DMZ.

The village of Daeseong-dong is located in South Korea and has a population of just under 200 people. The people who live there get special perks including an exemption from military service and tax breaks.

On the north side of the DMZ, located just 1 mile away from Daeseong-dong is the North Korean village of Kijong-dong. It is known in the North as the “peace village” and it is home to one of the world’s biggest flagpoles. It is also home to loudspeakers that blast propaganda 20 hours a day.

It isn’t believed that there are any permanent residents in Kijong-dong. It is only inhabited by soldiers and supporting personnel. Most of the buildings, when observed with high-powered telescopes, appear to just be hollow concrete shells and don’t even have windows.

Technically, military forces are not allowed in the DMZ. However, a police force is allowed inside the DMZ. What’s the difference between an armed soldier and an armed police officer? An armband that says DMZ police of course.

The South Korean DMZ police are usually military trained and are required to know the entire armistice agreement by heart, word for word.

If you remember back to my episode on the Korean Axe Murder Incident, there is one special area of the DMZ known as the Joint Security Area or JSA. It is also known as Panmunjom which is the name of the village where the armistice was signed in 1953.

The JSA is the only place where North and South Korean troops are actually close to each other. The entire JSA is run by the United Nations Command.

Prior to the ax murder incident in 1976, the entire JSA was considered neutral and either side could roam inside it freely. Since then, the MDL has been strictly enforced and now no one can cross.

If you’ve ever seen photos of soldiers at the Korean border, a table that straddles the border, this is where it was taken. This is also the only place where border crossing may take place, which happens very infrequently.

The Joint Security Area has several buildings that the MDL runs through, including the original conference room where the armistice was signed.

About 100,000 tourists per year visit the JSA from the South. Each visitor has to sign a waiver indicating “The visit to the Joint Security Area at Panmunjom will entail entry into a hostile area and possibility of injury or death as a direct result of enemy action.”

I’ve spoken of the terms of the armistice several times, but I don’t want to give the impression that it is something that both sides scrupulously observe. It has been violated hundreds of times by both sides. One of the terms of the agreement is that no new weapons may be brought to Korea, which has obviously has been repeatedly broken.

There have also been at least four attempts by North Korea to tunnel under the DMZ. When caught, the North Koreans said they were for mining coal, even though they went through solid granite. They went so far as to paint the walls of some of the tunnels black to look like coal.

The southern part of the DMZ also has another line called the Civilian Control Line, or CCL. It is located anywhere from 5 to 20 kilometers from the southern edge of the DMZ and it is designed to control civilian movement in the DMZ.

There has been one unintended consequence of the creation of the DMZ. With only occasional policing patrols, the entire area has become a de facto wildlife sanctuary.

At approximately 1,000 square kilometers, it has become one of the best-preserved habitats in the world. There are several endangered species in the DMZ including the red-crowned crane, white-naped crane, Korean Fox, and Asiatic black bear.

The idea of turning the DMZ into a national park first arose in 1966 and the subject has come up many times since. Billionaire Ted Turner has offered to fund whatever was necessary to turn the area into a peace park, and there has also been a movement to turn it into a UNESCO World Heritage Site.

Despite 70 years of sporadic conflict along the DMZ, there have been some recent steps taken to de-escalate tensions. In 2018 talks were held where both sides agreed to dismantle 10 guards posts along the DMZ along with their associated equipment and weapons.

There has also been a no-fly zone established along the DMZ for drones, fixed-wing aircraft, helicopters, and even balloons.

Likewise, there has also been an effort to clean up landmines in the area.

The demilitarized zone has been in place for so long, that regardless of what happens in the future on the Korean peninsula, at least some vestige of it will probably remain.

Either as a historical attraction or as a national park, the temporary creation of 1953 might just have become a permanent feature of the Korean Peninsula.