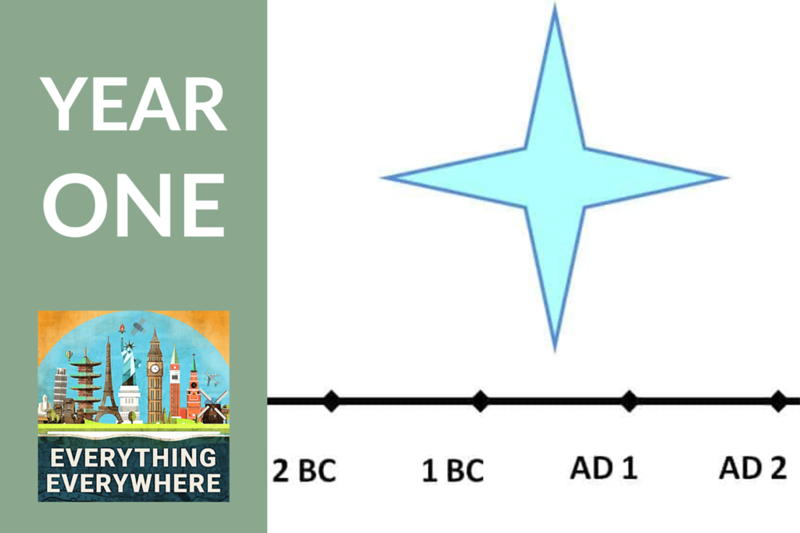 I am speaking these words in the year 2021. You might be listening to them in a different year, but whatever year you happen to be in right now, it will probably be a year using the same number convention for years.

But why did we start counting years at year 1? What did they do before that? Who picked year 1 and why? Why isn’t there a year zero? And what is the deal with AD and CE?

Learn more about why we count years the way we do on this episode of Everything Everywhere Daily.

I’ve had several episodes in the past which touched on the making of our modern calendar. I’ve talked about the development of the Gregorian and Julian Calendars. I’ve talked about why January 1st is the start of the new year and where the names of our months came from.

However, I’ve never talked about why we number our years the way we do.

Every civilization had its own way of counting years. The Islamic Calendar counts years beginning with the migration of Mohammed and his followers from Mecca to Medina.

The Chinese calendar doesn’t have a running number of years as the Gregorian calendar does. They simply have 60 years cycles, which does make it hard to determine dates in the distant past.

The Hebrew calendar is based on the number of years since creation. In this year, 2021, the Jewish New Year, or Rosh Hashanah, marked what they believe to be 5782 years since the creation of the world….or at least as determined by medieval Jewish scholars.

All of these systems were far better than what the Romans used to determine years. Initially, the Romans didn’t use numbers to refer to years. They used the names of the consuls who were elected for that year. It was an incredibly confusing system that required you to know the names of every Roman consul if it was to be meaningful.

Eventually, they did also track years as Ab urbe condita which means “from the foundation of the city”, which occurred in 753 BC. However, they still might reference recent years or the current year by the names of the councils. For example, 59 BC was the year of Caesar and Bibulus. Crowds dumped dung onto the head of Bibulus one day and he spent most of the rest of the year in hiding. That lead to the Roman joke that it was actually the year of Julius and Caesar.

With the rise of the Roman Emperor Diocletian, the calendaring system changed and began counting the years based on the ascension of Diocletian. You would reference a year as Anno Diocletiani.

Diocletian was one of the biggest persecutors of Christians.  The fledgling Christian community began using the same dating convention, but instead of calling the years anno Diocletiani, they named it after the martyrs and called the years anno martyrum, or the year of the martyrs.

If you remember back to my episode on the Gregorian and Julian calendars, one of the things which drove the early Chrisitan obsession with calendars was calculating Easter.

In the year 525, a monk who lived in what is today modern-day Bulgaria, named Dionysius Exiguus, was calculating dates for Easter.

He didn’t like the fact that their calendar convention was based on one of the worst Christian persecutors of all time: Diocletian.

He thought that it made much more sense for the Christian church to count their years based on the life of Jesus, so he did just that. He called these years Anno Domini or the year of our lord.

In his list, he went directly from anno martyrum 247 to anno domini 525.

The system created by Dionysius Exiguus didn’t catch on right away. It actually took centuries for the anno domini system to take off.  The first person to use the system in writing that we know of was the English Benedictine monk, Venerable Bede, who used it in 679.

This system wasn’t the only Christian calendar in the early church. A monk from Alexandira called Annianus around the year 400 created a calendar which was based upon the Annunciation, or the conception of Jesus. This calendar is still used today by the Ethiopian Coptic Church.

Annianus set the start of his calendar to be March 25, in the year 9. Here I’ll refer you back to my episode on why Christmas is on the date it is. This is almost a 10-year difference from the year of birth set by Dionysius Exiguus.

Given the large difference in dates, the big question is, did Dionysius Exiguus get the date right for the birth of Jesus?

The answer is, probably not. We have no idea why he picked the year he did to be year 1. There is nothing in the Bible that can put a hard date on when he was born. Most scholars put the date of Jesus’s birth around 4-6 BC.

So, OK, he got the year wrong, but it’s the thought that counts, and the calendar was intended to have year 1 be the year Jesus was born. So how do you count years before 1?

This is unquestionably the weakest part of our calendaring system. There is no year zero, which both makes sense and doesn’t make sense. You expect zero to come before 1, but if you are dating things from an event, then before that event is 1 year before that event.

The use of BC is English, unlike AD which is Latin. It traditionally meant “before Christ”. In Latin, the common usage was to use Ante Christum natum, which was abbreviated ACN and literally means “before the birth of Christ”. Likewise, you might occasionally see PCN which stands for post Christum natum which means “after the birth of Christ” PCN never really caught on, however.

Here I might as well address one of the big questions of what to call the periods of time before or after 1.

Traditionally, the years beginning with 1 are abbreviated AD for anno domini. This always rubbed non-Christians the wrong way or Christian groups that didn’t follow a calendar based on the birth of Christ.

You’ll notice that when I give dates for this podcast, I never use AD. This is because if you give a year without any indication, I think it is implicit that I’m talking about the years since year 1. If I don’t indicate that it occurred before year 1, then it should always be assumed I’m talking about after year 1.

Many people now use CE instead of AD. CE is usually understood to mean “Common Era”. The usage of “common era” is older than you might think. The first written use of it dates back to Johannes Kepler who wrote in Latin “annus aerae nostrae vulgaris” or the year of our common era.

The original English translation of this was not “common era” but rather “vulgar era”. Vulgar originally meant “ordinary people” and didn’t have the connotation it has today. It was used to separate the church calendar from the system of counting the years of a monarch, known as regal years.

By the 18th century, the term “common era” was being used more and more in English. In the 19th century, it was the preferred term for Jewish scholars.  Some religious scholars used “common” or “vulgar” to differentiate the true birth of Jesus or anno domini, which would have “common era” plus 4.

Some people have taken to not defining what CE means at all. It can be “common era”, it can be “Christian era”, or it could be “calendar era”. Take your pick. Personally, I think we should all start a movement to use “Vulgar Era” again.

With respect to the period before this, those who use the “common era” convention usually use BCE which means, ”before common era”.

My personal use in this podcast is a hybrid. I avoid AD or CE altogether as I explained above, but if I had to use one, I’d probably use CE, with the intent that it simply refers to the “calendar era” which I believe is more accurate than “common era”.

I personally use BC, just because it is so well known, and I think it is just easier to stick with a two-letter naming convention. Also, BC doesn’t have the same implications as AD does. Furthermore, you can again define the “C” in BC to mean whatever you want.

Both the AD/BC and the CE/BCE styles can be found in regular use. The BBC uses AD and BC, whereas, other organizations use CE and BCE.

Well, there is, and personally I’m a big fan of it as it solves so many problems, and it is very easy for everyone to understand.

It is called the Holocene Calendar, abbreviated HE. The Holocene is the geologic period we are in now and it ended after the last ice age.

To determine the year in the Holocene Calendar, all you have to do is add 10,000 to the current year, or put a 1 in front of it. That’s it.

You can calculate BC years by just subtracting the date from 10,001.

Year 1 in the Holocene Calendar is so far back, that there is no recorded history. There is nothing special about that year other than it is a nice round number of years before year 1, and it predates every recorded civilization.

Anything we know before the year 1 HE is approximate anyhow. It would be so old that you would just reference it as BP for “before present”, which is how most truly old things are dated anyhow.

I have no illusions about the Holocene Calendar catching on, but you have to admit it is simple and it does solve most of our problems. It might get some traction with historians and archeologists, but probably not much beyond that.

As it stands, we’ll probably keep using our current system, as messy as it is, which is based on the estimated date of birth of Jesus by a monk in Bulgaria, who probably got the date wrong.