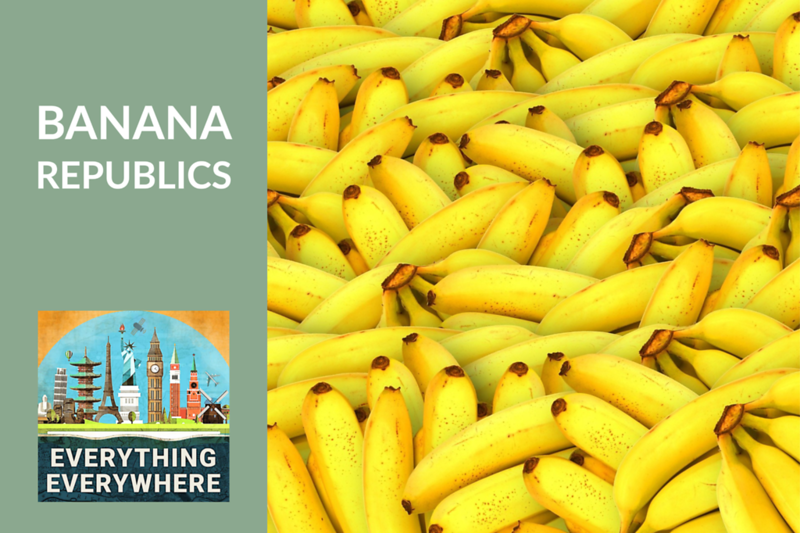 However, that term has a very real origin which involved actual bananas, mercenaries, corporate money, and the American government.

Learn more about Banana Republics, where the name comes from, and the history behind them, on this episode of Everything Everywhere Daily.

There are brand new classes on Masterclass that you check if you want to learn from some of the world’s best.

To understand the origin of banana republics we have to start, not surprisingly, with bananas.

Bananas are a tropical fruit and as such, they weren’t really part of the diets of most people in the United States even though the Civil War. Odds are most American’s probably never even saw, let alone tasted a banana in their entire lives.

In tropical areas, however, bananas grew in abundance and they were really cheap to grow. I’ll do an entire episode about bananas at a later time, and they are a far more fascinating subject than you probably realize.

However, for our purposes in this episode, bananas became extremely popular in the US and very cheap. In 1913, you could buy a dozen bananas for only 25 cents, but the same amount would only get you 2 apples.

Perhaps more importantly, bananas were insanely profitable. Despite how cheaply they could be sold in the US, the markup on bananas was many hundred percent.

This lead to the creation of fruit companies, run by American businessmen who began to dominate the tropical fruit business.

The Boston Fruit Company initially dominated the business in the Caribbean. It was founded by a junior assistant produce seller named Andrew Preston. He got a loan of $18,000 and began importing bananas into the US, as well as developing markets for people to buy the bananas. He also pioneered the refrigeration of bananas to extend their shelf life so they could be sent further than port areas.

In Costa Rica, a Brooklynite by the name of Minor Keith got a contract to build a railroad in the country. Costa Rica was very poor and couldn’t afford to build it themselves, so they granted him a 99-year lease on 800,000 acres of land to build the tracks from the capital of San Jose to the port of Limon on the Caribbean side.

Keith realized that he could grow bananas on the land on either side of the train track, and then use the train to transport the bananas to the port.

After a period of consolidation in the industry, by the end of the 19th century, there were only a handful of companies that dominated the fruit business.

In 1899, the United Fruit Company was created in a merger of Keith’s Central American operations and Preston’s Caribbean operations.

The United Fruit Company controlled over 80% of the banana business in the United States after buying up over a dozen of their competitors.

These fruit companies were highly vertical operations. They owned the plantations, harvested the bananas, and also transported and imported them into the US.

The system used in Costa Rica of exchanging  railroad construction for land and tax breaks was repeated in Guatemala and Honduras, both of whom, like Costa Rica, had little money yet wanted infrastructure.

In Honduras, the United Fruit Company was given 2,000 acres for each mile of railroad track that they laid….and they didn’t bother to hook up the capital city of Tegucigalpa.

In 1902 in Honduras, the government gave a Philadelphia businessman named  William Streich a huge land concession for building a five-mile railroad between the towns of Cuyamel to Vera Cruz.

Enter on to the scene Samuel Zemurray. He was a banana pushcart operator in Mobile, Alabama who began selling bananas from the United Fruit Company which ripened too early, that would otherwise be thrown away. He bought them at a discount and created his own supply chain in Alabama up the railroad routes.

The United Fruit Company didn’t like being undercut, so they agreed to loan him the money to buy out the lands that William Streich had in Honduras.

His business in Honduras exploded going from 336,000 bunches of bananas in 1903 to 1.75 million bunches in 1910. He created the Cuyamel Fruit Company.

So far in this story, you have banana tycoons, land deals that are a bit shady and perhaps exploitive, and a significant amount of corruption in the banana-growing countries.

What really made the phrase “banana republic” have some teeth occurred in 1911.

Honduras had gotten itself heavily into debt trying to build a railroad from their Pacific to Caribean sides. The United Fruit Company worked to secure loans from the US to Honduras in exchange for an exclusive right to export Honduran bananas.

There was another fruit company in Honduras called the Vaccaro brothers, which was granted a railway, and no other company could build another within 20 kilometers of it.

Zemurray and his Cuyamel Fruit Company weren’t going to have any of that, so he recruited the former Honduran President Manuel Bonilla, an American mercenary named Gen. Lee Christmas, and several hundred soldiers for hire and lead a coup d’etat against the Honduran government.

Honduras became unable to raise foreign debt, which greatly reduced the ability of their economy to grow. Gen. Lee Christmas was literally named the head of the Honduran military, and the US dollar became the official currency in the country.

With an incredibly friendly government put in place by one of the fruit companies, they were able to get laws passed to control labor and wage rates and pretty much controlled all of the infrastructure in the country.

In 1916, the US Embassy in Honduras actually reported, “the territory controlled by the Cuyamel Fruit Company is a state itself, within another state…it houses its employees, cultivates plantations, operates railroads, stations, steamship lines, potable water systems, power plants, commissaries, [and] clubs.”

Despite the actions of Zemurray and the Cuyamel Fruit Company, they were still much smaller than the United Fruit Company.

In 1924, the Vaccaro Brothers changed the name of their company to Standard Fruit.

In 1929, after the stock market crash, the United Fruit Company purchased the Cuyamel Fruit company, increasing their power even further. Zemurray became a minority shareholder and technically retired. However, during the depression, the stock price kept falling, and Zemurray eventually acquired a controlling interest in United Fruit.

At this time, the banana business was basically a duopoly between United Fruit and Standard Fruit, and Honduras was the largest banana producer in the world.

The influence and manipulation of the countries in the region never really stopped. Hondurans nicknamed the United Fruit Company el Pulpo, which means the octopus.

In Guatemala, the story was similar. United Fruit was given the contract to run the post office in 1901 and then ran the telegraph service in the country as well.

Their ability to control Guatemala was due to propping up a series of dictators in the country that were favorable to the United Fruit Company.

This didn’t end in the 20s or the 30s. In 1954,  Zemurray and United Fruit pressured the Eisenhower administration to support a coup against the Guatemalan President Jacobo Árbenz Guzmán.

A somewhat similar story can be told in other Central American countries as well. The fruit companies were responsible for the 1934 Great Banana Strike in Costa Rica.

In 1928, United Fruit was behind an event called the Banana Massacre in Colombia that killed several hundred striking workers.

The United States military occupied Nicaragua from 1912 to 1933 and the Dominican Republic from 1916 to 1924. The US Military was involved on seven separate occasions in Honduras from 1903 to 1925.

These collectively are known as the Banana Wars.

The actual phrase “banana republic” was coined by the writer, O. Henry.

He published a book in 1904 titled Cabbages and Kings, where he wrote of a fictional country called the Republic of Anchuria, which he described as a ‘small, maritime banana republic’.

He was very clearly referring to the country he was residing in at the time, Honduras.

The fruit companies do not hold nearly as much power today, however, they still exist, only by different names.

The United Fruit Company is now known as Chiquita. The Standard Fruit company was purchased by Dole Foods, which has there own sordid story in Hawaii, which will be the subject of a future episode.

Once you know the history behind the term “banana republic” it makes its selection as the name of a clothing store chain all the more puzzling.

The banana republic period in Central American and the Caribbean still has a legacy today. The control and influence of fruit companies for almost a century impeded the economic growth of these countries, which is still reflected in their level of economic development in the 21st century.