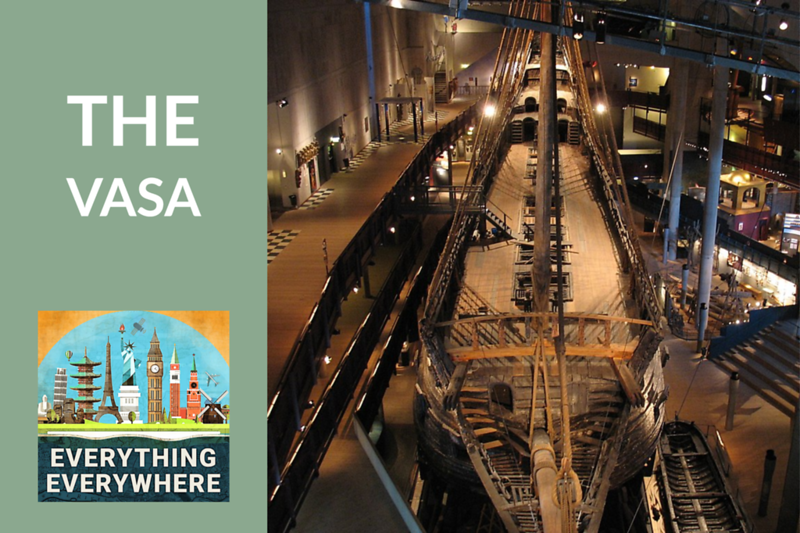 The Swedish King Gustavus Adolphus oversaw the rise of Sweden as one of the great powers in Europe.

In 1626, he ordered the construction of a warship that would be the most powerful floating platform in Northern Europe.

Its maiden voyage in 1628 was one of the most memorable of any ship in history.

Learn more about the Vasa, its incredible maiden voyage, and its status today, on this episode of Everything Everywhere Daily.

If you want to get anywhere in life, you need skills, and nothing makes learning those skills easier than Skillshare.

Skillshare has videos available for almost every subject you can think of. They have academic subjects like math, physics, biology, and art history, as well as practical subjects like learning how to play the piano, dancing, and mixing cocktails.

You probably don’t think of Sweden today as a great military power, but actually once was.

During the reign of King Gustavus Adolphus, Sweden reached its peak of military power and influence in Europe. The Swedish Empire held territory in what is today the countries of Sweden, Norway, Finland, Germany, Poland, Estonia, Latvia, Lithuania, and Russia.

Sweden’s success came from its great leadership and its army. They were a land power and Gustavus Adolphus was an all-time great general.

They weren’t that much of a naval power. They had a fleet of ships, but they were mostly smaller ships and they couldn’t compete with top tier ships of the line which was produced by the other major powers like England and France. Sweden’s ships were mostly designed for escort and patrol duty.

Basically, they were a mediocre naval power.

In 1626, the king ordered the creation of a ship that could serve as the flagship for the Swedish navy. The ship was to be named the Vasa, which was the name of the Swedish royal house that he was the head of.

The construction of the ship was ordered during a period where they were fighting Poland-Lithuania, they had very poor relations with Denmark, and were worried about an invasion by Catholic powers on the continent.

No one in Sweden had ever built a two-deck ship before, and the original plan for the Vasa was for a single deck gunship.

The shipbuilder was a man by the name of Henrik Hybertsson. He had built many ships before, but when the requirements were changed to a two-deck ship, a ship he had never built before, he didn’t have any written plans.

A two-deck gunship isn’t just a case of putting a second deck on a ship. Each deck will be laden with heavy cannons and the second deck totally changes how the ship floats and its stability.

Hybertsson became sick about midway through construction and died before it was finished. The construction contract was then passed to his widow Margareta Nilsdotter.

To put this into perspective, the USS Constitution, which I did a previous episode on, was built 150 years later, was over 700 tons heavier, and seldom had over 50 guns. So, the Vasa had a lot of guns….and because they just sort of winged the second deck, it was much wider at the top than a normal ship.

A few weeks before the ship was to launch, the ship’s captain Söfring Hansson, did a demonstration for Vice Admiral Klas Fleming. He ran a test where 30 men ran back and forth on the top deck to simulate the ship rocking.

However, they had to cancel the test out of fear that the ship would capsize.

Up to this point, there isn’t much about this story that would make it podcast-worthy. There were thousands of ships built during this period and maybe this one was a little different, but there was nothing to really make it stand out.

What made the Vasa podcast worthy occurred on its maiden voyage on August 10, 1628.

The launch of the ship was a big event. Hundreds, if not thousands of people gathered around the harbor to see Sweden’s biggest ship set sail.

The Vasa struck all four of its sails and open up its gun ports so it could fire a salute once it was out in the harbor.

The light wind filled the sails as the ship with a crew of 130 set out into the Stockholm harbor to the cheers of the crowd.

A gust of wind hit the ship as it passed by the bluff of what is now called Södermalm.

…and the ship sank.

1.3 kilometers or .8 of a mile from leaving port, the great ship in the Swedish navy sank before it even left Stockholm harbor, killing 30 on board.

OK, I realized I might be skipping a few steps here, but the suddenness of the sinking was basically that shocking.

Remember how I said that no one had actually built a two-deck gunship, and how it was really wide at the top and how it had a lot of guns and how a bunch of guys running from side to side almost capsized it?

Well, it turned out the way the ship was built left it extremely vulnerable to gusts of wind. The dreaded enemy of every sailing vessel.

The ship as you can guess was extremely top-heavy. When it hit a gust of wind, which really wasn’t even that strong estimated to be about 8 knots, it caused the ship to lean dramatically to one side.

The gun ports on the lower deck were opened, and the ship leaned so much, that water started to enter the gun ports. The water rushing in prevented the ship from returning upright and from there was just a matter of time until it filled with water and sank.

This makes the Vasa one of a small handful of ships that sank on its maiden voyage, along with the Titanic. The Titanic at least made it halfway across the ocean and had to hit an iceberg to sink.

I’ve done some research and I can find only one example of a ship that sank faster on its maiden voyage, and that was the SS Daphne in 1883 in Glasgow, and that was due to an anchor being attached which flipped the ship.

The Vasa is a 17th-century version of a project management failure. Almost everyone up and down the chain of command can bear some responsibility for the failure.

It was a massive embarrassment for Gustavus Adolphus and for Sweden.

However, this is not the end of the story of the Vasa.

Just three days after the disaster, a contract was signed to try and raise the ship, but it was unsuccessful. Years later, an English team tried to raise it. They managed to right the ship, but that only got it stuck in the mud at the bottom of the harbor.

Finally 30 years after the sinking, a team managed to recover 50 of the guns, which were really the most valuable part of the ship, using diving bells.

After that, the exact location of the Vasa became lost to time. People remembered the story, but there was little effort to find the ship.

That was until 1956 when an amateur archeologist named Anders Franzén found the location of the Vasa. The Swedish Navy and other museums and institutions created the Vasa Committee for the purpose of raising the sunken ship.

For 2 years, divers created six tunnels below the wreck of the Vasa to install six steel cables underneath the ship.

Once the cables were in place, the ship was slowly lifted out of the water in stages over a period of several years. While the ship was raised, debris had to be removed to lighten the load, and repairs were made underwater to make the hull watertight.

It was floated back to a dry dock and it managed to float by itself. It was kept in a temporary facility until 1988 when it was then moved to the Vasa Museum, where it sits today.

The Vasa was in shockingly good condition for a 300-year-old ship. The deck was sturdy enough to walk on. A wooden ship this big had never really been recovered before.

The ship had to be kept wet so the wood wouldn’t crack. They also had to work through the mud and debris which was still in the ship, much of which had accumulated over three centuries in the harbor.

Most of the iron had rusted away quickly, but the organic matter, particularly the wood, was preserved quite well due to the cold waters. In warmer waters, shipworms usually will decompose wooden ships quickly, but they don’t exist in the waters of the Baltic Sea.

You can visit the Vasa today if you visit Stockholm. There is no other ship of that size and age that has been recovered intact in the entire world. There are constant efforts underway by the museum to preserve the ship and slow the decay of the wood. The temperature in the museum is kept at 18–20 °C or 64–68 °F year-round for this reason.

The Vasa is one of the most popular tourist attractions in Stockholm today.

Even though I’ve been to Stockholm, I haven’t visited the Vasa Museum. It is on the top of my list for when I return, however.

The legacy of the Vasa has reverberated throughout history. Management consultants have created the term Vasa Syndrome to explain project failures that are due to problems with communications and goal setting.

The Shuttle Challenger disaster is considered to be an example of Vasa Syndrome.

While the Vasa can certainly be used as a metaphor for poor planning and communications, I think it can also be considered a great example of recovery and revitalization, because, after 333 years at the bottom of the sea, it still managed to sail again.